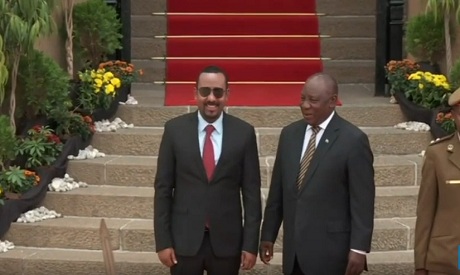 Officials from Egypt, Ethiopia and Sudan are due to meet in Washington on Monday in a final attempt to resolve the dispute

Ethiopian Prime Minister Abiy Ahmed has called on South Africa’s President Cyril Ramaphosa to intervene in Ethiopia’s dispute with Egypt over a giant dam project Addis Ababa is building on the Nile.

Following talks in the capital Pretoria, Abiy said he had requested Ramaphosa “negotiate between Ethiopia, Egypt and Sudan” on the matter.

“I’m sure he will play a significant role on bringing us on win-win solution.”

“He [Ramaphosa] is a good friend for both Ethiopia and Egypt. Also as upcoming [African Union] chair he can make a discussion between both parties so as to solve the issue peacefully,” Abiy said during a joint press conference with Ramaphosa.

The South African president is set to assume the rotating presidency of the African Union (AU) next month, succeeding Egyptian President Abdel-Fattah El-Sisi.

“Ethiopia always believes in a win-win approach with Egypt and Sudan. We will follow the same track,” Abiy said. “Without having peace we can’t realise our vision of development and growth.”

South Africa’s public broadcaster SABC reported that Ramaphosa “has agreed to assist the Ethiopian government in solving its impasse with Egypt over the massive Nile dam project.”

“There must be a way in which a solution can be found. As for ourselves, we are willing to play a role in facilitating whatever agreement that can be crafted,” said the president.

Ministers from Egypt, Ethiopia and Sudan are set to meet in Washington on Monday for the final round of meetings mediated by the US that aim to resolve the dispute over Grand Ethiopian Renaissance Dam (GERD).

The three countries have set a 15 January target to resolve their disagreements over the filling and operation of the $4 billion hydroelectric dam.

If the dispute is not resolved by that deadline, the three countries will either seek international mediation or involve their heads of state, under an agreement the nations reached in Washington in November.

Egypt fears the 6,000-megawatt mega project will restrict the amount of Nile water it receives, which comprises the vast majority of its freshwater. Ethiopia says the project is key to its development goals and its target to become Africa’s largest power exporter.

Last week, the three countries have failed to reach an agreement on technical issues including the filling of the dam, with Cairo and Addis Ababa exchanging blame for the deadlock.

Ethiopia said Egypt is trying to reinforce “self-claimed sole ownership of the Nile waters” with a “proposal of filling in 12-21 years.”

Egypt’s slammed the claim as “deliberately misleading”, saying its proposal suggests filing the dam within six-seven years during average or above-average flow of the Blue Nile.