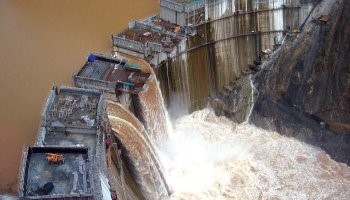 Ethiopia has announced that the Grand Ethiopian Renaissance Dam will begin producing electricity in August.

A source from the Ethiopian government informed The New Arab’s sister publication, Al-Araby Al-Jadeed, that bodies had been given notice for electricity generation.

The announcement came as the US envoy to the Horn of Africa, Jeffrey Feltman, was in Addis Ababa, to discuss concerns with the project.

The generation of electricity is reportedly dependent on a number of development plans, in which Ethiopia is partnered with other countries, and a successful second filling, that is scheduled to be completed by the end of July.

According to the plan, Ethiopia intends to produce 750 megawatts of electricity, which will be generated by two completed units.

The issue of the GERD has caused intense disagreements between Ethiopia and its downstream Nile neighbours Sudan and Egypt.

Both Egypt and Sudan have said that the GERD will impact its access to water and will lead to acute water shortages in the country.

The Nile River supplies Egypt with 97 percent of its fresh water.

Ethiopia views the project as a means to help lift millions of people out of poverty with the dam expected to provide electricity to 60 percent of the county.

An interim agreement on the second filling, put forward by US, UAE and African mediators, has been agreed to in principle by Ethiopia, but has expressed disappointment that it does not address the issue of participation in the filling process.

Ethiopia wishes coordination with downriver countries to be limited to the exchange of information and reporting alone.

Additionally, a source told Al-Araby Al-Jadeed that Ethiopia had rejected a US proposal for construction to stop.

Egyptian diplomatic sources indicated that talks regarding the interim agreement were “making progress”.

Khartoum has called for a formal agreement to be included which would “end the illegal Ethiopian presence” on Sudan’s borders in the state of Gedaref, a proposal that was supported by Cairo.

It is the intention that an interim agreement would be signed at this summit and would also be used to launch discussions for a permanent agreement.