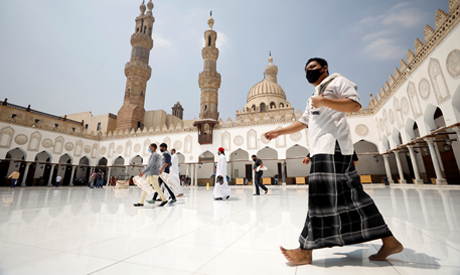 Al-Azhar Islamic Research Academy (AIRA) has launched a campaign to fight Islamophobia. “The Islam they do not know”will be on Al-Azhar’s official portal in English and its social media website accounts, including Facebook, Twitterand Instagram.

Al-Azhar is the seat of Islamic learning in the Muslim world.

AIRA Secretary-General Nazeer Ayad told Al-Ahram Weekly that the campaign aims to correct the false image of Islam among some people which he said had resulted in some acts that “offend Muslims and their sanctities and support the phenomena of racism and extremism against religions, inflaming feelings of hatred among them”.

Ayad said the campaign will focus on the opinion of Islam and its prophet on various issues by showing what Islamic teaching advises in different situations.

The campaign also shows how Islam always raises the values of mercy, affection, humanity and justice, confirms respect for the other for his humanity, regardless of colour, race, or religion, rejects everything that may provoke hatred and resentment among people and opposesentrenchedmeanings of injustice and racism.

The campaign is in line with the Humanitarian Brotherhood Treaty whichGrand Imam of Al-Azhar Ahmed Al-Tayeb signed with Pope Francis. It aims at countering terrorism and extremism “that are trying to use religion to delude youth by spreading untrue concepts in the name of religion”.

“The AIRA is an important sector of Al-Azhar since it works on an international basis through its delegations which raise awareness in terms of correcting misconceptions about Islam, presenting its correct image whichpromotes peace and love and rejecting violence and extremism,” Ayad said.

“After so many discriminatory acts by extremists such as burning a copy of the Holy Quran and publishing offensive images of the Prophet Mohamed AIRA decided to launch a campaign targeting those who do not speak Arabic,” Ayad said, adding that the campaign aims to show the greatness and tolerance of Islam and how it teaches its followers to deal with others with grace and integrity. “It aims to acquaint foreigners with Islam and its moderate approach that does not tolerate violence,” he said, adding that he hopes that this will end extremism.

The campaign aims at correcting any misconceptions about Islam for non-Muslims as well as Muslims who do not understand the essence of Islam, Ayad said.This misconception causes some members of both sides to act in ways that are offensive to Muslims and their sanctities.

While AIRA may be a good initiative,professor of International Media at Cairo UniversityIman Hosni says these issues should not be dealt with by seasonal campaigns that are a reaction to incidents. “Instead there should be serious reform and long-term remedial strategies based on cultural and communicative dimensions,” Hosni said.

“Ever since Samuel Huntington’s theory about the clash of civilisations appeared, an ideological war started in some Western countries against Islam as they think it will compete with their civilisation, so it has nothing to do with religion,” she said, adding that “some of them are secular societies that have a long history of using holy violence while all religions promote love and peace.”

According to Hosni, the real problem is that there is no real revision of religious dialogue in Islam while other religions have already revised their dialogues and have condemned parts of them.This is taken by some parties as a pretext to generalise, discriminate and act violently.

Therefore, she says, the media should be subjective. “We behave as victims and even our media coverage is superficial and focuses on the emotional side, using the same stereotypes when covering religious issues while it should focus on the common humane side between religions. Some Western news channels are constantly spreading collective hatred of Islamic identity. It is in the hands of Muslims to change their present state and defend Islam through their media.”

*A version of this article appears in print in the 17 September, 2020 edition of Al-Ahram Weekly