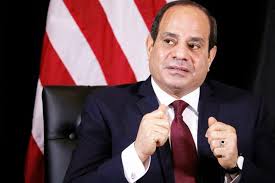 As the African Union mediated a new round of Renaissance Dam negotiations at the beginning of this week, Egyptians on social media blamed President Abdel Fattah Al-Sisi for the crisis.

Egypt, Ethiopia and Sudan have disagreed for years, primarily on how Ethiopia will fill the dam in order to maintain enough water for the upstream countries.

Egypt and Sudan are worried that if Ethiopia fills the dam too quickly, they will not have enough water.

After years of deadlock, in mid-July Ethiopia announced it had started filling the dam.

Social media users posted under the Arabic hashtag “Sisi ruined it, what is he waiting for”, blaming the president for exacerbating the crisis.

The comments were sparked after former Ethiopian Prime Minister Haile Mariam revealed that Al-Sisi signed the Declaration of Principles in 2015, which said that the first stage of filling the dam would take place in parallel with its construction.

Activists online have said that this crisis is the worst facing Egypt’s history and asked why Al-Sisi’s supporters have remained silent over this issue and asked them to try and justify what was happening, according to Al Jazeera Arabic.

They pointed out that the president has already given the islands of Tiran and Sanafir to Saudi Arabia and made a deal to import natural gas from Israel.

They also expressed their anger over the government’s decision to demolish homes across the country as part of its gentrification project, level historical cemeteries and to renew licences only for vehicles running on natural gas.

At the end of July Egyptians launched the hashtag “I did not delegate” and posted their rejection of parliament’s decision to authorise armed forces to fight “criminal militias” in what was interpreted at that time as a reference to Libya.

Activists said it was an attempt to shift the focus away from the regime’s mishandling of coronavirus and the Renaissance Dam negotiations.