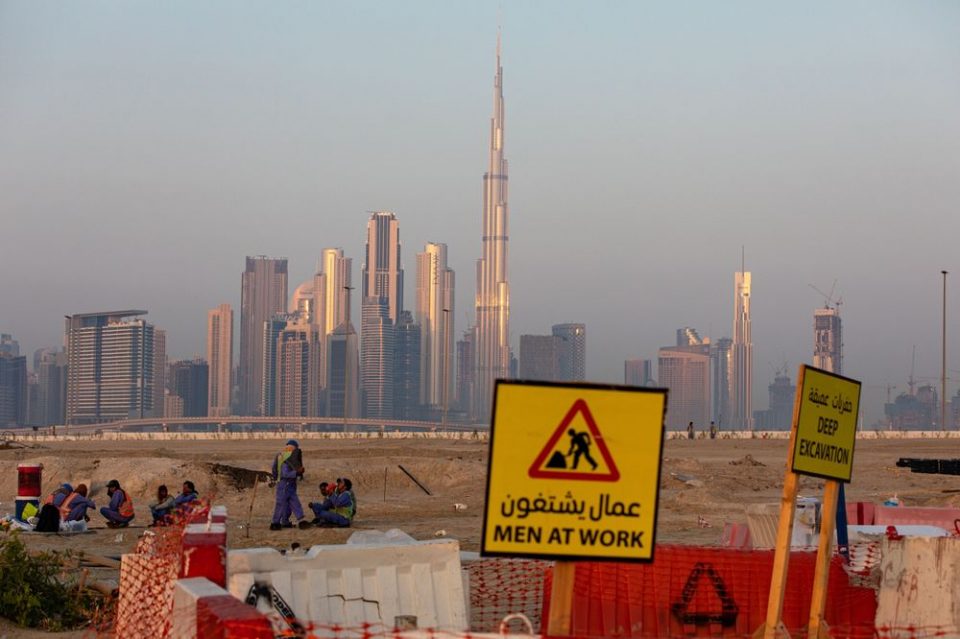 Workers take a break at a construction site in Dubai.
Economics
By
Abeer Abu Omar
February 10, 2020, 4:57 AM PST

perating conditions in Dubai’s non-oil private sector worsened in January for a third straight month to the lowest level in nearly four years, according to IHS Markit. Its Purchasing Managers’ Index dropped to 50.6, barely above the threshold that separates growth from contraction. Wholesale and retail, as well as construction, slipped below the no-change mark, IHS Markit said.

“Employment in Dubai was notably affected, with companies reporting the joint-quickest fall in job numbers seen throughout the 10-year series history,” David Owen, economist at IHS Markit, said in the report Monday. “Firms expect little pick-up in sales in the near future.”

The dim outlook is increasingly translating into layoffs as companies streamline operations in the face of weak demand, with average prices extending a decline uninterrupted since May 2018. Dubai’s biggest bank, Emirates NBD, is among lenders in the United Arab Emirates that have cut thousands of jobs.

Across the U.A.E. as a whole — of which Dubai is a part — business conditions fell into contraction last month for the first time ever.

Already under pressure from regional geopolitical tensions, Dubai’s travel and tourism industry actually showed a “modest improvement” in January, IHS Markit said. But now it faces disruptions because of the viral outbreak in China.

Dubai can’t afford a downturn in tourism, however, since the city’s prospects hinge on the success of its much-awaited World Expo exhibition later in 2020.

The emirate’s spending this year is set to soar 17% ahead of the event, with the economy expected to expand 3.2%. A survey during the last quarter of 2019 published by the local government showed that three-quarters of consumers are confident of improvements in the employment situation during the next 12 months.

Still, it might take some time for the jobs market to pick up, according to Khatija Haque, head of Middle East and North Africa research at Emirates NBD. “The coronavirus will likely weigh on transport, logistics and tourism — in the first quarter at least,” she said.