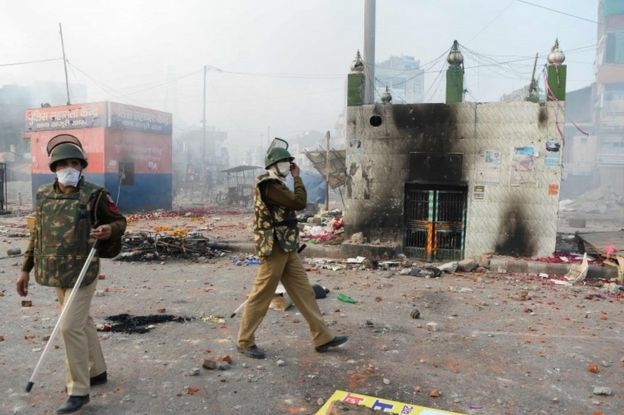 Violence has erupted again in parts of north-east Delhi, which saw deadly clashes between supporters and opponents of the law on Monday night.

Two journalists have been attacked and BBC reporters in the area say mobs are throwing stones and shouting slogans.

There are fears of further clashes.

Mobs in parts of north-east Delhi are throwing stones at each other, and the situation remains tense, according to BBC correspondents.

A policeman and six civilians have died in Delhi’s deadliest violence since the Citizenship Amendment Act (CAA) – which critics say is anti-Muslim – was passed last year.

Around 150 people, including 48 policemen, are reportedly injured.

“There are around 200 people, some are holding the Indian flag in their hands, others are holding saffron flags, generally associated with right-wing Hindu groups. They are chanting Jai Shri Ram [hail Lord Ram],” BBC Hindi reporter Faisal Mohammed said.

The crowd was also shouting “shoot the traitors”, our reporter added.

Correspondents say the timing of the unrest is an embarrassment to Prime Minister Narendra Modi as he hosts the US president and the violence has taken the spotlight away from Mr Trump’s visit.

Where is the violence?

It broke out in three Muslim-majority areas in north-east Delhi on Sunday and has continued since.

The violence in the area has seen protesters firmly split along religious lines, BBC reporters at the scene say.

Both sides have blamed each other for starting the clashes. 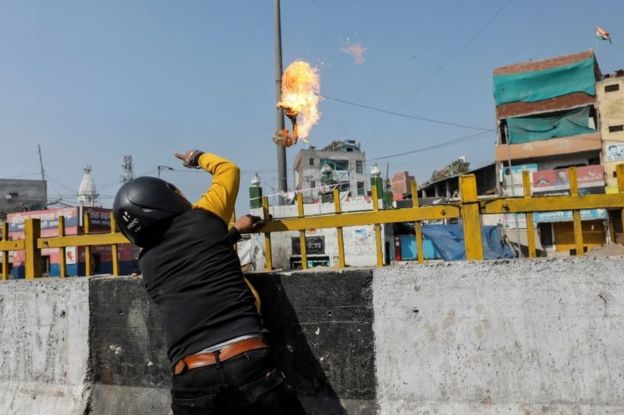 The violence has been linked to a BJP leader, Kapil Mishra, who had threatened a group of protesters staging a sit-in against the CAA over the weekend, telling them that they would be forcibly evicted once Donald Trump had left India.

Eyewitnesses said they saw charred vehicles and streets full of stones in areas like Jaffrabad and Chand Bagh on Tuesday morning. Police were allowing people to enter only after checking their identity cards. Some Metro stations have also been shut.

Who are the dead and injured?

Six civilians and one policeman have been killed in the violence so far.

“One of the seriously injured is a senior police officer. He has now been moved to another hospital for specialised treatment,” an official said.

Two journalists belonging to the NDTV news channel were badly beaten while they were out reporting on Tuesday morning.

Shahid Alvi, an auto rickshaw driver, died because of a bullet injury he suffered during the protest. His brother Rashid told BBC Hindi that Shahid was married just a month ago.

“He was shot in the stomach and died while we were taking him to the hospital,” he said.

Another victim has been identified as Rahul Solanki.

His brother, Rohit Solanki, told BBC Hindi that he died after being shot as he tried to escape from a mob.

“He had gone out to buy groceries when he was suddenly surrounded. He was shot at point blank range. We tried taking him to four hospitals but we were turned away,” he said.

What are officials doing?

“There are not enough police on the streets [in the affected areas]. Local police are saying they are not getting orders from above to control the situation, and they are not able to take action,” he told reporters.

Home Minister Amit Shah, who is in-charge of Delhi’s police forces, is holding a meeting with Mr Kejriwal to discuss the situation. 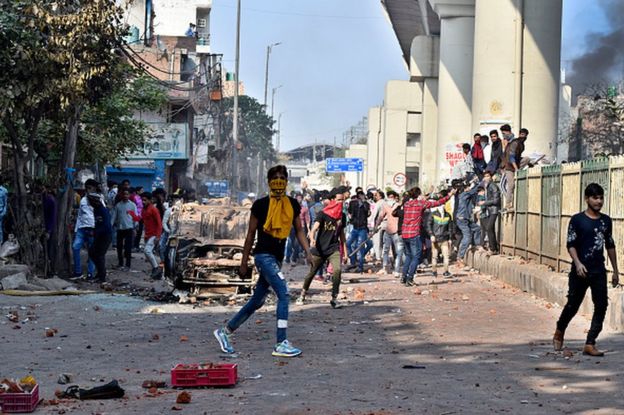 What is the citizenship act about?

The new law has raised fears that India’s secular status is at risk.

Critics say it discriminates against Muslims. But the government says the protests are unnecessary as it only seeks to give amnesty to persecuted minorities.

Protests so far have been largely led by Muslim women and men, but a lot of Hindus have also joined them.