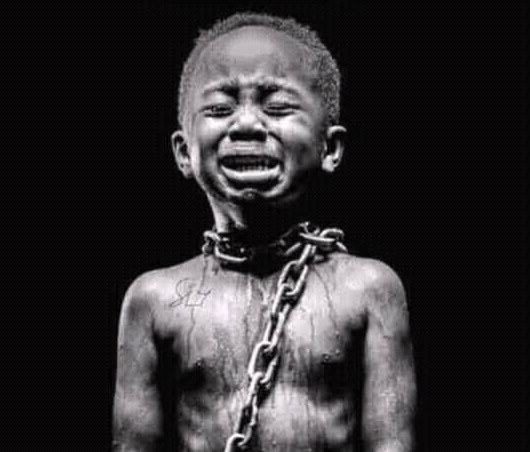 Why is the story of Africa selling Africans into slavery cannot just be taken as the truth?

There is a saying that when a lie is told repeatedly over a long period of time it turns to be the common truth. Indeed, the story of black Africans capturing and selling their fellow African brothers and sisters into inhuman slavery has been told to us (Black People) for generations, and it is still being telling to everyone on the face of this planet earth.

Again, it is important to recognize that, not only has this story been told repeatedly over a long period of time, the proponents, have also found their way in using different cunning methods to deepen its impact on our society. Commonly, this unfounded story is infused into many basic educational curriculums to indoctrinate our children before they are grown up.

Notwithstanding the various attempts by those who want to keep the black race at the button for their selfish gains, it must be recognized that that no matter repeatedly or the length of time in which a lie is told, it always gets exposed when it comes in contact with the truth.  This is so because; a lie cannot pass the basic test of logic and historic-fact evaluation. In this short piece, I intend to subject this story of Africa selling Africans into slavery to a test of logical reasoning and historic-fact evaluations in order to understand whether there is enough grounds to accept it or not.

Logically, it is necessarily that we ask questions whenever a story of our history is told to us. Basically, we need to be aware of who originally wrote that history; for what purpose was it written; and for whose interests was it written to serve? In the case of the story of Africa selling Africans into slavery, it is obvious that this story was not originally written by any African. Neither did the writings include the objective views of the black Africans (both at home and in the diaspora) at the time. Taken for example, the system that governs colonization which makes the act of educating the Black African an illegal action; it was forbidden for slave owners or slave parents to teach their dependents how to read and write let alone allowing them to document by first hand, what is going on in their lives. If the Africans were tightly preventing from keeping records of what is happening in their own lives, while at the same time, their slave colonizers document these happenings, then, it is possible that the content of those documents many be for several purposes but what is certain is that none of these purposes can be for the positive interest of the Black African. This definitely calls for the re-examination of our beliefs in what we read from their handy works.

Another interesting scenario that needs a logical assessment in this story of Africa selling Africans into slavery is how the majority of the slave taken from Africa consistently come from relatively strongest group or tribes as can be seen in the case of Ghana and Nigeria where the majority of the slaves taken away come from the Akan and the Igbo tribal groups respectively. Not only were they coming from the most dominant tribes, they were also the most muscled, healthy, and intelligent folks in the African society.

It is on records that majority of slaves taken from Ghana to all the known destinations were from the Akan tribe which is the largest tribe in Ghana. As a result, the slave masters had to put stringent measures to ensure that the slave to do not continue to speak their Twi language or perform their common Akan traditions and cultures since they considered these as instruments that facilitate rebellion and revolts among these slaves.

What is more likely to be the true case in point is that, those people taken from the African continent were largely,  those who resisted the colonizers’ determination and actions to take over economic and political powers in the civilized African society at the time. Logically, these dominant tribes and the most strongest men and women were more likely to be the sections of the African society to oppose the colonizers’ actions because they formed a classes of the society that control major portions of economic and political powers; hence, the need to resist to protect their privileged positions. Consequently, It comes as no surprising that colonization became possible only after the colonizers have succeeded in taken away these strong ‘men’ from the African society.

Logically, when in need of wildlife, no sane man will walk into the forest and then sit to negotiate with the animals and makes payments in exchange for his wants. This is so, because, the sane man ordinarily does not consider this wildlife to have rights to negotiation. Additionally, the tender of exchange to be offered by this sane man is likely to have no value for the animals in the wild to entice them to agree to his offer. If this logic is true, then it is more likely that the colonizers’ story which tries to rope-in Africa into his barbaric and inhuman act against the children of Africa is untrue. First of all, these colonizers did not consider the African as a human.  In fact, their historical descriptions of the African as well as legal documents clearly indicate so. For example, in our attempts to gain recognition as humans, the 1787’s Three-Fifths Compromise was presented to clearly tell us the category in which the colonizers place us. There is no way the same person who does not consider us as humans will come and negotiates with us, and makes payments to us for what he wants. On the other hand, the African societies, which were self-sufficient and have no need for western lifestyle or an American dollar, were unlikely to sell their sons and daughters to some hungry people who were roaming around the world in search of food and of survival.

Empirically, one will be able to identify whether the story of Africa selling Africans into slavery is true or false when the following questions are fully and sincerely answered:

In all these, if Africa was innocent, then it is unlikely that the negative stories told about Africa’s role in slavery are true.  Unfortunately, the stories of slavery and slave trade have solely been told by the wicked slave master. As a result, he has painted every African in Africa whom he did not take away from the African soil as a slave seller. But the reality is that, both the African in the diaspora and those at home we all slaves to the same slave master during that period of his total dominance; except that he made selections based on his interests and needs and sent out the most fitting ones while keeping the rest on the African soil with the same faith!

It is time for us to come to recognize that this story is being told to make the oppressor looks less evil in the eyes of the oppressed and also, to create an unending animosity between the black population at home and those who were taken across the Atlantic Ocean.  By doing so, the colonizers have in their hands a tool to prevent a possible reunited between the two groups. Let us not allow the wicked man to still stand on our way for a reunification that will generate the needed force for a genuine emancipation of our black race.

The slave trade story is a scam which all black people have know its intentions.