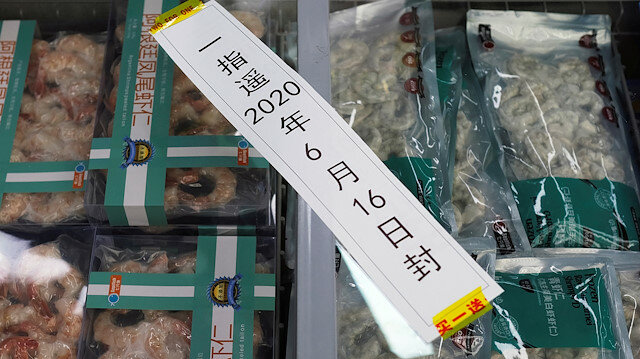 Frozen seafood products made of imported shrimps are seen inside a sealed freezer at a supermarket following a new outbreak of the coronavirus disease (COVID-19) in Beijing, China June 19, 2020.

The western Chinese city of Lanzhou said on Saturday it had detected the new coronavirus on the packaging of a batch of shrimp imported from Saudi Arabia, as China ramps up testing of frozen foods.

The Lanzhou Municipal Health Commission said in a statement on its website that it had found one positive sample on Friday on the inner packaging of imported frozen shrimp from Saudi Arabia that had passed through customs in the coastal city of Tianjin.

The cold storage plant in Lanzhou where the case was discovered had been temporarily closed, all employees of the plant had been tested, all food involved was sealed and the whereabouts of all food sold had been determined, the statement said.

The commission said the shrimp had been purchased by Zhanjiang Guolian Aquatic Products Co Ltd, entered the country on Oct. 21 and reached Lanzhou on Nov. 8.

The positive sample in Lanzhou follows the detection of the virus on the packaging of a batch of Brazilian beef in Wuhan on Friday, and on Argentinian beef samples in Shandong and Jiangsu provinces this week.

The World Health Organization says the risk of catching COVID-19 from frozen food is low, but China has repeatedly sounded alarms after detecting the virus on imported food products, triggering disruptive import bans.