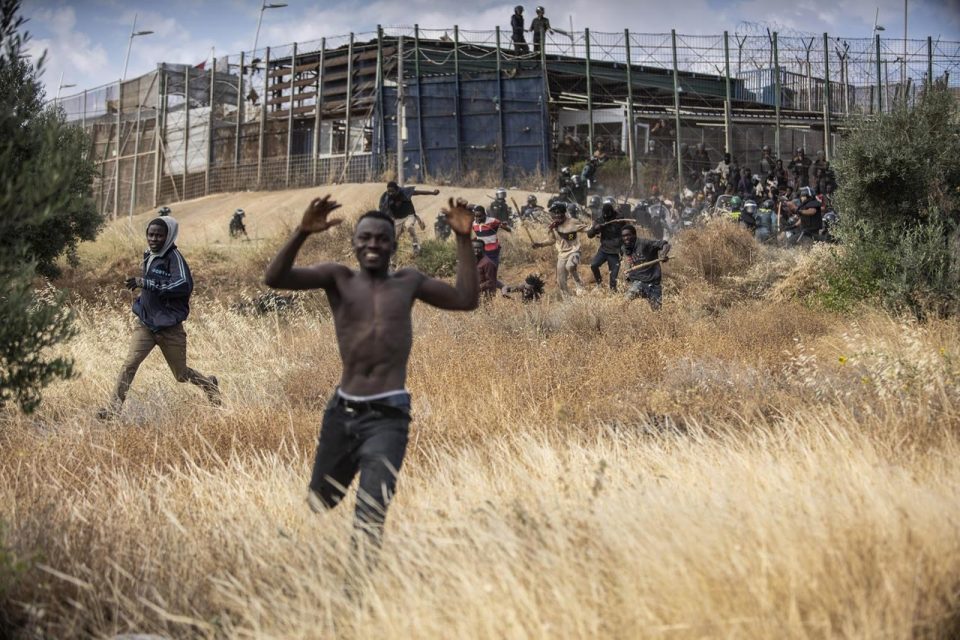 On June 24th, approximately 2000 African migrants made a desperate attempt at a mass border crossing, climbing the iron fence separating Morocco and the Spanish enclave of Melilla. Footage of African bodies piled up at the foot of the fence, many lifeless, while others were being savagely beaten by Moroccan Security Forces, went viral. To date, the number of African migrants who lost their lives has climbed to 37.

We join with those all over the world, to condemn, in the strongest possible terms, this horrific attack by Moroccan security forces. However, we know that in a matter of weeks, the statements of condemnation and outrage will be buried, and the incident will simply be added to the mountain of crimes against African humanity. The question is, what is to be done?

This brutal attack on Africans, on African soil, highlights the crisis that Africa is facing. The fundamental problem is that Imperialist forces have been able to install and sustain neo-colonial regimes throughout the continent, while rolling back and destroying all attempts by the African masses to rid themselves of the Imperialist’s stranglehold, from Ivory Coast and Zimbabwe to Libya.

One of the most serious setbacks for Africa was the destruction of the Libyan Jamahirya, and the assassination of revolutionary Pan-Africanist, Muammar Qaddafi. Utilizing the situation that had arisen in neighboring African countries, Egypt and Tunisia, the imperialists seized the moment to invade and destroy Libya, and murder Qaddafi. In so doing, they were able to neutralize what was a very real challenge to their continued plunder of African resources, and their continued exploitation and genocide of African peoples.

In addition, the destruction of the Libyan Jamahiriya dramatically changed the situation with regard to African migration. The Libyan Jamahiriya was the most prosperous country in all of Africa. Border restriction for Africans were relaxed which meant that Africans from all over the continent were free to live and work in Libya. From there, they were able to send money home to their families.

When people risk their lives and the lives of their families to flee their countries, it is because of the desperate and unbearable conditions they face at home. The crisis facing Africa is worsening by the day. Numerous African countries are experiencing a surge in attacks and sabotage by heretical, Islamic terrorist groups, aided and abetted by foreign powers from Qatar to the Western Imperial nations, with the aim of   destabilizing and balkanizing the continent. The US and their allies are notorious for using these groups as foot soldiers, and as a justification for the imposition of USAFRICOM, which has relations and/or military bases in almost every African country.

Africa is experiencing climate shocks resulting in some of the worst droughts in East Africa in recent history. Food and fertilizer shortages, coupled with rising prices, caused by NATO’s proxy war against Russia, are exacerbating the already dire conditions. Poverty and hunger are on the rise, and the potential risk of famine across the continent looms large. Lack of access to potable drinking water is threatening the lives of millions of Africans.

There is only one way to overcome these problems, and that is to rid the continent of foreign military, economic and political interference and domination, and the neo-colonial governments installed to manage African nation-states on behalf of these foreign entities.

We, revolutionary Pan-Africanists, must intensify our efforts to come together with revolutionary and progressive forces worldwide, to accelerate the collapse of the US Empire and its West European, Canadian and Australasian surrogates. Their decline is without doubt underway, and the world is now at a critical tipping point. Despite the overwhelming challenges that confront us, both organizationally and personally, we must organize and mobilize as never before, to hasten the inevitable implosion and destruction of all those countries that built their economies on the backs of captured Africans and the plunder of Mother Africa.

There is nothing that White Power fears more than our united efforts and a united Africa, free from foreign domination. It is the reason why they target every African leader and movement advocating this vision. They know that a united Africa would completely change the balance of power globally. A well-documented fact is that if Africa stopped the flow of all resources and raw materials to the Western nations for just one week, the United States and Europe would grind to a halt.

Almost every known natural resource needed to run contemporary industrial economies, uranium, gold, copper, cobalt, coltan (for cell phones, computers etc.), platinum, diamonds, bauxite, and especially large reserves of oil are located in Africa. Azania (South Africa) alone contains half the world’s gold reserves. Democratic Republic of Congo contains half of the world’s cobalt and 80% of the world’s known coltan reserves. One quarter of the world’s aluminum ore is found in the coastal belt of West Africa and the continent is awash in petroleum reserves. These resources must be liberated and placed in the hands of the people, so that they can live decent and dignified lives in the land of their birth.

We cannot look to or expect anything from current African regimes with few exceptions, or to the impotent African Union, most aptly described by Zimbabwean writer, Reason Wafawarova, as “a bunch of cowardly bucolic boofheads, totally mesmerized by Western donor funding…What an unthinking lot of hopeless traitors!”

We must now look to ourselves in this defining moment for Africa and indeed, for all of humanity. We must, no matter what the obstacles, work tirelessly to confront the core issues at stake. We must heed the words of Muammar Qaddafi, in an address to a large gathering in Niamey, Niger in 1997:  “This is a sacred battle, concerning our moral values… We cannot accept any undermining of these values. All barriers created by the colonialist armies must be demolished…we are stronger than them in terms of our moral values and material power… the wealth of Africa must be in the hands of the African masses. To achieve this, Imperialism and Neo-colonialism must be destroyed.”

And in the timeless words of Marcus Mosiah Garvey “Arise Ye Mighty Race – Accomplish what you will.”