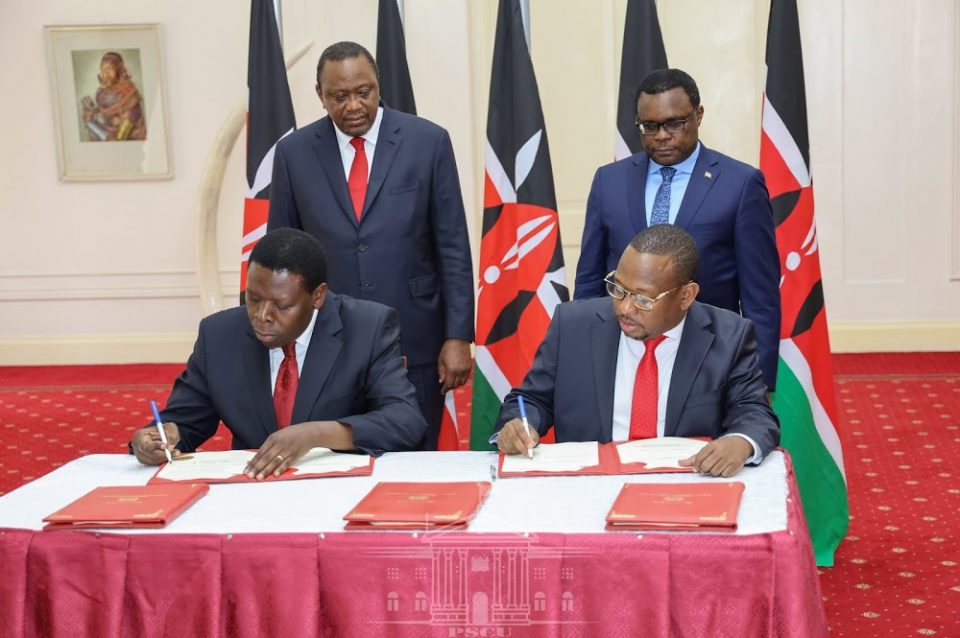 The decision by Nairobi Governor Mike Sonko to surrender key county functions to the national government was considered the least disruptive of the options available to address the leadership crisis at City Hall.

Witnessed by President Uhuru Kenyatta and Senate Speaker Ken Lusaka, Mr Sonko and Devolution Cabinet Secretary Eugene Wamalwa yesterday signed an agreement at State House, handing over the crucial functions of health, transport, public works and planning to the national government.  It means the county will surrender huge revenue generated by these key dockets as well as forego billions of shillings allocated from the county’s share of national revenue as corresponding resources must be taken back to the national government- which essentially leaves the governor with a shell. Yesterday, Council of Governors Chairman Wycliffe Oparanya explained the deal had effectively rendered Sonko a “governor without portfolio.”

With the governor facing graft charges, barred by the courts from accessing his office and without a substantive deputy, high level talks convened to resolve the leadership crisis ruled out the drastic action of suspending the county. This was considered not viable because of the laborious procedure- investigation by an independent commission of inquiry, approval by the President and Senate authorisation- as well as cost implications as it would lead to an election. There were no funds to conduct the election and also the number of people who were going to lose their jobs including Members of County Assembly due to that decision worked against it.

Impeachment option The option of impeachment was also going to lead to an election as, without a deputy to take over for the remainder of the term, as was the case with Kiambu County where James Nyoro assumed leadership after removal of Ferdinand Waititu, County Assembly Speaker Beatrice Elachi was to act as a governor for 60 days before a fresh election.

Sonko, who has to defend himself against an impeachment motion already filed against him at the assembly, is said to have agreed to voluntarily surrender the major devolved functions that would ensure smooth, “Nairobi residents receive services efficiently.” Sources told The Standard County Executive Committee members and heads of departments will be retained, but deployed to other functions. However, Heads of Departments (HoDs) affected by the deal will now report directly to the national government. Yesterday, Mr Oparanya said the decision by Sonko will water down gains made by devolution, adding that this now leaves him as a “governor without portfolio.” He explained that by voluntarily surrendering major functions that generate high revenue for the county, Sonko will have minimal areas to control.

“It has not taken us by surprise because there have been many problems in Nairobi and the decision by the court to bar charged governors from accessing office contributed to this,” he added. Oparanya said CoG is waiting to look at the agreement signed between the governor and the national government, adding that the deal reached at State House is provided for in law. “We do not know if he surrendered the functions 100 per cent or partially,” he added. Article 187 of the Constitution provides that a function or power of government at one level may be transferred to higher level of government. Sonko signed away the city’s devolved functions to the national government, effectively losing his grip on his chaotic reign at City Hall.

The county government will now be run by President Uhuru Kenyatta’s government in unprecedented development since the establishment of the 47 counties. The decision to transfer the functions places Sonko as the first governor to hand over his functions in a clear indictment on his ability to deliver services to the Nairobi residents. State House last evening said the national government will take over county health services, county transport services, county public works, utilities and ancillary services as well as county government planning and development. “In a land mark agreement signed at State House today, Governor Mike Mbuvi Sonko and Devolution Cabinet Secretary Eugene Wamalwa in concurrence with President Uhuru Kenyatta, signed an agreement, handing over functions of the Nairobi County Government to the National Government, pursuant to Article 187 of the Constitution,” said State House Spokesperson Kanze Dena in a statement. The signing of the agreement was also witnessed by Mr Lusaka and the Attorney General Paul Kihara.