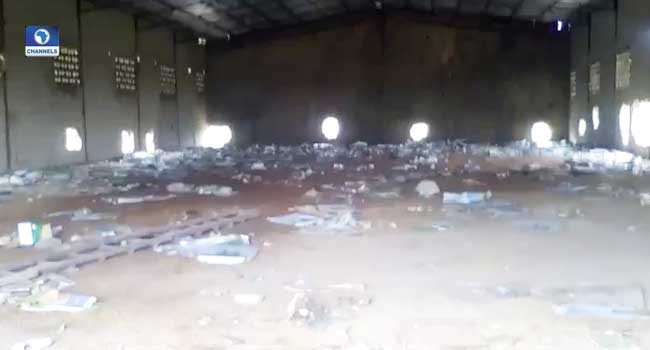 Cities across Nigeria have fallen under a siege of looters as mobs turned the initially peaceful #EndSARS protests into robbery spree.

The effects of the wanton attacks on police stations and officers, which started in Lagos State in the past week amid the #ENDSARS protests, have appeared in the form of an anarchic chaos: an unprecedented looting spree in which looters are operating almost unchallenged across Nigeria.

Following the widely condemned shootings at protesters in Lekki, Lagos State, on Tuesday, which witnesses said were by Nigerian soldiers, hoodlums started looting and razing businesses and public facilities in the state on Wednesday.

But the looting has taken an anarchic dimension in many other Nigerian states, forcing a number of governors to declare a curfew.

In an interview for this report, Nnamdi Obasi of the International Crisis Group linked the looting spree to the pre-existing problem of under-resourced police system and the demoralising effects of the recent attacks on the police.

“The lynching of policemen by mobs, sometimes in very gruesome circumstances, also means police themselves are vulnerable, particularly when they are deployed in small numbers,” Mr Obasi said. “This must be very demoralising to many officers and should also be of great concern to citizens.”

In the best of times, Mr Obasi said, the police are overstretched and are “extremely challenged” in the face of the country’s broken security order.

Video clips obtained by our reporters depict a chaotic rush by mobs to steal without any restraint from state security forces or by the owners of the goods. The mobs have also been committing arson.

In Lagos, as the palace of the Oba of Lagos, Rilwan Akinolu, was attacked and looted, so were the Lagos High Court, Igbosere and retail businesses on the Island and Mainland. Powerful images emerged from Bode Thomas Street, a popular business area in Surulere, of ruins, forcing comparison with Syria’s devastated city of Aleppo on the social media.

A warehouse for food items meant to relieve people impacted by the COVID-19 restrictions was invaded at Mazamaza area of the state by thieves, who then looted it on Thursday.

The viral videos from Mazamaza appeared to have inspired people to go in search of similar warehouses in other states like Adamawa, Plateau, Kaduna, Osun, Cross River, and Ondo.

But items other than COVID-19 palliatives were targeted as people criminally exploited the near total absence of the police on the streets to steal and perpetrate carnage in many Nigerian states from north to south.

Who are the looters?

Analysis of interviews with residents and pictures of the incidents show the looters are mostly not the usually dreaded rogues with thuggish appearances and mannerisms. They are ordinary community folks who live in the cities and towns they have looted.

Many of them married women and men, with kids; unemployed and under-employed youth and petty traders are criminally exploiting the near-total absence of regular security services to steal and commit carnage.

Nigeria has one of the world’s worst poverty indices. An estimated 83 million Nigerians are poor and the unemployment rate is 27.1 percent, an increase from 23.1 percent in 2018, according to the country’s bureau of statistics.

Many Nigerians are only struggling to scrape together some money to survive day after day and upward social mobility is difficult for many.

The rising prices of basic essentials of living, especially food, erode the value of people’s income, deepening hardship for low-income earners. Frustrations are mounting but Nigerian government officials continue to take high pays and some of them openly flaunt wealth and share pictures of their children’s graduations abroad, while the decrepit local schools are shut.

Anti-government sentiments are high in Nigeria, making it easy to mobilise actions against public establishments, even for criminal purposes.

The initially peaceful #EndSARS protests gained traction because of people’s pent-up anger only expressed through the protests.

Unsurprisingly even after the government made concessions, including scrapping the notorious SARS unit and setting up probe panels across the states, street demonstrations continued and many tried to expand the demands to include an end to bad governance.

Amid deepening hunger, finding a warehouse in Lagos where the government kept food items was a trigger for looting and mob attacks.

Many have termed the storage of the food aids while people are hungry as insensitive. But most of the items were only delivered in September and October by a coalition of private sector leaders pooling resources to help alleviate the impacts of COVID-19 restrictions.

In one video, taken in Ilorin in north-central Nigeria, a soldier is heard asking hundreds of people invading a compound to “go peacefully and come out peacefully.”

Two residents have identified the compound as “Agro Mall” where relief materials for victims of flood disaster were kept. The invasion happened on Friday, the residents said.

“Gently, gently,” the soldier was barking commands. “Don’t attack anybody. Don’t spoil anything. Peacefully. Please, please, we are begging.”

One of the looters could be heard responding from the crowd: “Okay SIR!”

One person, Kayode Ogundamisi, shared the video and tagged it, “loot peacefully” and added: “Smart strategy by the Nigerian military here. Attempting to defend the location is simply going to lead to needless death.”

“Please note that there was no protest in Ilorin on Friday,” said one resident who has been at the centre of mobilising against the looters but asked not to be named for fear of reprisal. “People left their home willingly for the cargo airport (to loot food items). It was at the cargo airport that they became a crowd.”

The resident further disclosed that before the looters invaded the Agro Mall, they had been to Bukola Saraki’s Mandate House in hope there were items there. “But that one (Mandate House) was empty so they moved to Agro Mall,” the resident said, adding that “they then went to Customs.”

Apparently, Customs office became a target because they believed the service had seized illegally imported food items in its stores in Ilorin. However, they were resisted by the Customs officers, who were said to have killed three of the looters after one of their colleagues was killed.

Then around 7 p.m on Friday, the resident said, the looters invaded Shoprite and emptied it overnight despite the imposition of curfew by the state government. “They were at Shoprite till around 7 AM on Saturday and neighbouring houses and shops were also looted,” the resident said.

“It was after we started crying out that looting was ongoing despite the curfew and that we would take the law into our own hands that security forces now started appearing,” the resident said. “We are helping them to identify the looters and some of them are being traced and arrested.”

In Ibadan, the capital of Oyo State, a property belonging to the lawmaker representing Oyo Central Senatorial District, Teslim Folarin, was burgled by resident robbers.

They made away with brand new motorcycles, freezers, and grinding machines, said to be kept for distribution to party supporters as “constituency projects.”

Seven persons suspected to be among the looters have been arrested, NAN reported on Saturday, quoting a brother of the senator.

According to his media office, the items were procured for the Federal Cooperative College, Ibadan, as the senator’s constituency projects.

The looting spree spread across the state affecting a local government secretariat and an office of Lasun Yusuf, former deputy speaker of the House of Representatives. Public and private warehouses were also looted in Osogbo, Ilesa and Ile-Ife, forcing the Osun State government to impose a fresh curfew.

In Calabar, the capital of Cross River State, hoodlums looted and razed public and private property.

The city was “free for all,” a journalist on the ground, Jonathan Agban-ughal, told PREMIUM TIMES on Saturday. The hoodlums looted and then destroyed the houses of Geshom Bassey, a senator; and Victor Ndoma-Egba, former senator and NDDC chairman; Bassey Henshaw, a senator.”

The journalist said Mr Bassey, who was at home with his family, called him by phone asking to be rescued

Tinapa, one of the biggest features in Calabar, was also looted, so was a warehouse where COVID-19 food aid. Soldiers were said to have watched without intervening as the looting went on apparently because Governor Ben Ayade had instructed security agencies not to shoot at anyone looting government warehouses.

A government-owned newspaper, Nigerian Chronicle, was also vandalised and looted.

“At 8 Miles, it is a war zone, there is no military or police presence here… If the people stop you and you refuse to carry them in your vehicle to where they are currently ransacking, they will vandalise your vehicle,” the journalist, MrAgban-ughal, told our reporter.

The federal psychiatric hospital was among facilities invaded and looted in Calabar. Others included branches of First Bank and Access Bank, state offices of WAEC, NDDC, NLC, and DPR, warehouses of SEMA and state ministry of works, a police station and private businesses, including Cold Stone Ice Cream, The Nation reported.

Bizarre pictures emerged from Jos, the capital of north central Plateau State, of massive scrambling for food items as people invaded COVID-19 food aid warehouses. In one picture, a large number of people broke into a warehouse and some of the looters did from the roof of the building. The general area of the warehouse was on standstill as scores of vehicles can be seen parked on the surrounding roads.

The state governor, Simon Lalong, was forced to re-impose a curfew and said lives had been lost to the violence.

Kaduna State has also imposed a curfew after looters invaded a COVID-19 food aid stores in parts of the state, a SEMA relief store, and a NAFDAC office.

Taraba and Sokoto States hurriedly distributed stored food items out of fear looters could descend on the facility holding them.

The Inspector-General Police, Mohammed Adamu, has asked his commanders to “reclaim the public space and restore normalcy.”

The police are already taking control of Lagos streets and are joined by residents to clean up the city after a wave of looting and arson.

But beyond the immediate restoration of order by the police, Nigeria may face a worsening security situation in the times ahead after police weapons were stolen by criminals who invaded stations.

Mr Obasi of the International Crisis Group said, “The recent attacks on police stations and looting of armouries is a particularly dangerous development.

“Police weapons falling into the hands of unidentified and unaccountable persons, including criminals, will only aggravate an already very worrisome security situation.

“State governments and police commands need to act fast towards recovering the looted weapons, including by offering incentives to whistleblowers and by stepping up intelligence from several other sources.”