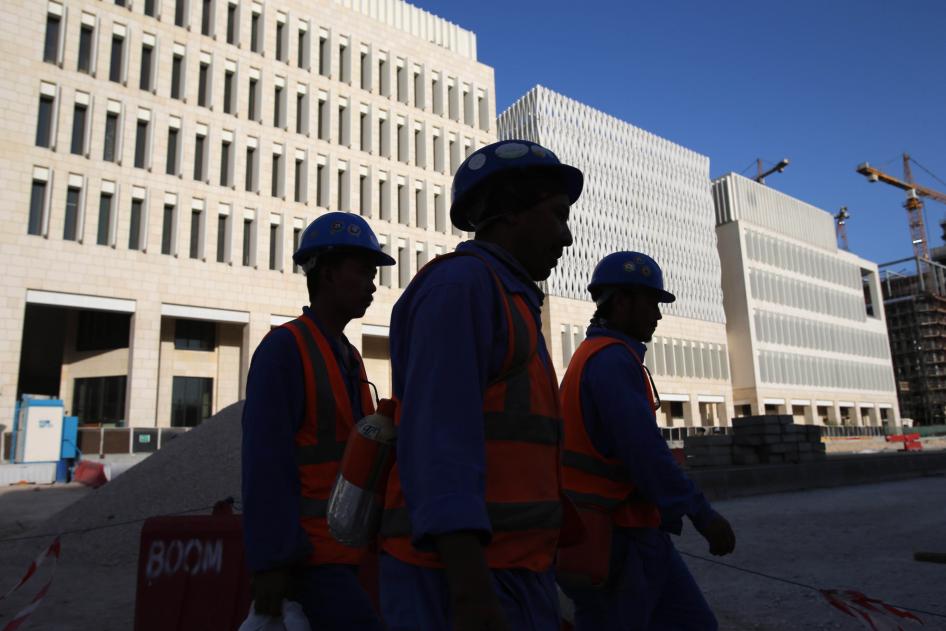 Migrant workers return to their accommodation from the construction site of Al Janoub Stadium in Al Wakrah, Qatar. (AFP)

LONDON: Qatari authorities rounded up and expelled dozens of migrant workers after telling them they were being taken to be tested for coronavirus, Amnesty International said in a report published on Wednesday.

The report details the “inhumane” treatment of hundreds of men from Nepal who were apprehended by Qatari police in March.

Amnesty interviewed 20 of the men, who said police had told them they were going to be tested for the virus and would be returned to their accommodation afterward.

Instead, they were taken to detention centers, held in “appalling” conditions for several days, and then sent to Nepal.

One of the men detained in Doha told Amnesty: “We were asked to stop to test for the virus. Police told us that the doctor would come and check the virus. But they lied to us.”

Out of the 20 interviewed, only three said they had their temperature checked while in the detention facility.

“None of the men we spoke to had received any explanation for why they were treated this way, nor were they able to challenge their detention or expulsion,” said Steve Cockburn, Amnesty’s deputy director of global issues.

“After spending days in inhumane detention conditions, many were not even given the chance to collect their belongings before they were put on planes to Nepal,” he added.

“It is disturbing that the Qatari authorities appear to have used the pandemic as a smokescreen for further abuses against migrant workers.”

All the workers left Qatar without receiving their salaries or end-of-service benefits owed to them.

One man was given cash by his company while in detention, but a police officer took it for “safekeeping” and failed to return it.

In response to Amnesty’s report, the Qatari government claimed that “officials uncovered individuals engaged in illegal and illicit activity,” and accused the migrants of the “sale of dangerous food goods.”

But none of the men were ever told directly of any such charges, and documents given to the men and reviewed by Amnesty do not suggest that they were ever charged with any criminal offense.

Amnesty’s report is the latest of many issued by global rights groups expressing concern over Qatar’s treatment of the thousands of migrant workers who live and work in the country.