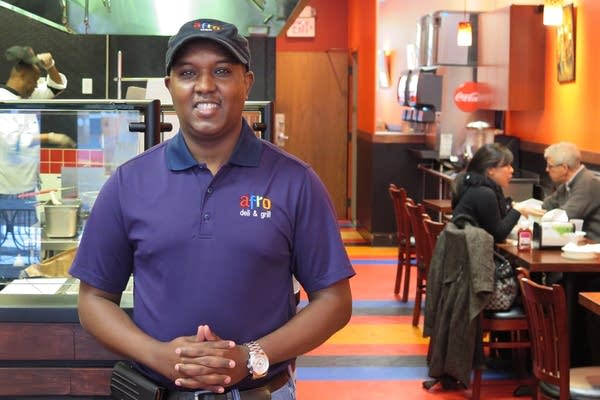 Since the COVID-19 outbreak, business hasn’t been great for Afro Deli.

With four restaurant locations scattered across St. Paul and Minneapolis, owner Abdirahman Kahin built his business into a local chain over the last decade. It has been one of the most successful African-owned businesses in the state.

But in the past week and a half, since Governor Tim Walz ordered restaurants closed to eat-in customers, Abdirahman said he’s had to lay off most of his roughly 50 employees and temporarily shutter his two skyway restaurants in downtown Minneapolis and St. Paul.

Now, he said, a handful of employees keep the two remaining locations–in Minneapolis’s Stadium Village and downtown St. Paul–open during reduced hours. In that time, Afro Deli went from selling roughly 300 meals a day to just 60 through take-out and delivery on a good day.

“Right now, we cannot even call it business,” Abdirahman said. “It doesn’t even cover our rent.”

Despite the difficulties, Abdirahman said he knows so many others from his community are in tougher predicaments, and he’s using Afro Deli to help out where he can.

On Tuesday afternoon, he and a half-dozen volunteers distributed around 200 free meals to two south Minneapolis apartment complexes where most tenants are East African immigrants. The meals went to elderly and disabled residents who Abdirahman and the volunteers said needed support during the outbreak the most.

“We saw the need,” Abdirahman said. “The crisis is going to be very severe, and we have always been involved in our community. We knew what was going on in our community, so it was an easy decision.”

Among the volunteers distributing meals were Mohamud “BBC” Hassan, program director for refugee and immigration services at Somali Family Life Center and Ahmed Ismail, who coaches youth soccer in Minneapolis and goes by the moniker Coach Ahmed.

The two showed up at Seward Square apartments and then made their way to the Village at Franklin Station apartments, both in Minneapolis, to deliver meals (always keeping the proper six feet of space between themselves and others). Mohamud said they brought the Afro Deli meals to people who aren’t physically able to go outside and shop for food for themselves and those who are medically at a high risk of getting seriously ill if they contract the novel coronavirus.

“It’s our responsibility,” Mohamud said. “This is our first priority.”

Ahmed, who wore a protective mask while he volunteered, said distributing the food was an extension of the community organizing activities he’s been involved in for the past several years. “It means a lot to help our community,” he said, “because of the tough times and this deadly disease that we are facing now.”

Abdirahman isn’t sure whether he’ll be able to distribute so many meals again to the elderly population during the pandemic, given the challenges his business is facing. “I can’t guarantee anything, but we will always try our best,” he said.

He does plan for Afro Deli to keep offering free meals to K-12 students who have been out of school since Gov. Walz ordered them closed over a week ago, especially those who normally depend on free lunches during the school year. Currently, the open Afro Deli locations in St. Paul and Minneapolis offer free meals to school children in need between 11:00 am and 2:00 pm, Monday through Friday.

Abdirahman hopes to be able to hire back employees and re-open the closed locations after the pandemic ends, but for that to happen, Abdirahman said his business will need “a lot of help from the feds.” He plans to apply for a state loan through an emergency aid program announced by Gov. Walz earlier this week, which could infuse his business with between $2,500 and $35,000.

“It’s a good action by the government,” he said. “But it’s not the same as when you’re running a profitable business.”

All of which makes Abdirahman concerned about how COVID-19 and the business closures will impact the many immigrant-owned restaurants and cafes in the community that are smaller than his own.

“It could be [that] most of them don’t come back if this goes another week or two weeks,” he said. “So people need to be mindful and support those restaurants that are open for even a few hours.”

FUNDED BY READERS AND AVAILABLE TO ALL

Sahan Journal provides essential information for and about our newest Minnesotans. We publish in Hmong, Spanish, Somali and English. Publishing in multiple languages will help people stay safe because they are getting complete and accurate information. This is public service journalism of the utmost importance.

Your contribution, no matter the amount, is so valuable – it helps us cover the additional expenses of translation. Support Sahan Journal for as little as $5.