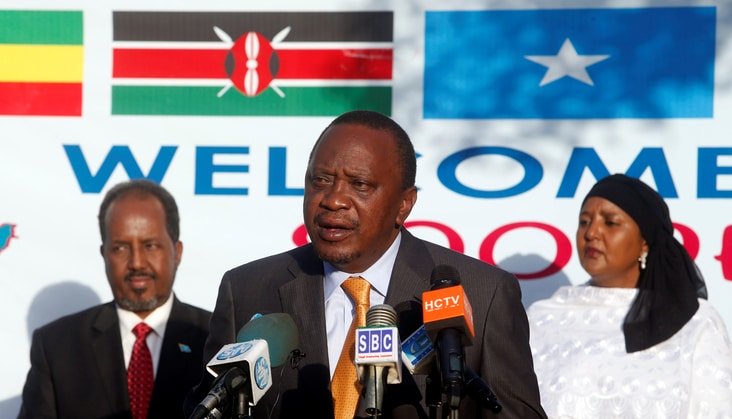 Kenya’s President Uhuru Kenyatta has acted to recover assets siphoned off to Swiss banks. REUTERS/Feisal Omar
Money for Nothing

Professor of international development based at Centennial College, Toronto, Canada.

Kenya is an economic success story by any measure.

The country is the fourth-largest economy by GDP in sub-Saharan Africa (SSA) after Nigeria, South Africa, and Angola.

With a GDP of $109bn, Kenya is the largest economy in eastern Africa, having overtaken Ethiopia in 2017.

The economy is larger than the combined economies of Tanzania and Uganda, its two East African Community (EAC) partners.

And Kenya is the only country in eastern Africa to have significantly reduced poverty, having graduated from low-income to middle-income level.

Yet Kenya faces an internal challenge that persistently undermines its development potential — the country’s ruling elites and their appetite for corruption.

The World Bank’s study, Elite Capture of Foreign Aid: Evidence from Offshore Bank Accounts, published on February 18, came as a shock. The term “élites” is defined as ruling politicians, bureaucrats and their cronies in the private sector involved in aid-funded projects.

The main finding of the study is that aid disbursements “coincide with significant increases in deposits held in offshore financial centres known for bank secrecy.”

Put another way, ruling politicians, bureaucrats and their friends stash billions of dollars in secret offshore banks whenever foreign aid lands in their country. The research used quarterly information on aid disbursements from the World Bank in combination with Bank for International Settlements (BIS) banking statistics. Luxembourg, where secrecy is paramount.

In the East Africa Community, the larger the economy, the more aid money the ruling elites captured and stashed into offshore foreign bank accounts.

Between 1990 and 2010, Kenyan politicians and their cronies transferred US$3bn. In Tanzania, the EAC’s second-largest economy, the elites siphoned off US$586m. Uganda came next with US$270m, followed by Rwanda on US$190m, and lastly, Burundi with US$122m.

The amount of foreign aid diverted by Kenyan ruling elites is appalling.

The US$3b stashed in offshore accounts for 20 years works out at US$150mn a year. That kind of money can build, for example, a power plant that generates electricity for an entire rural district.

The good news is that the ruling elites are finding it harder to stash cash in the West, including havens such as Switzerland.

Perhaps most surprising is the robustness of asset-recovery by the leading haven, Switzerland, which has returned millions of dollars stolen by corrupt African politicians. StAR indicates that to date, Swiss authorities have returned to Nigeria US$700m stolen by the military ruler Sani Abacha.

The Swiss and Kenyan governments are engaged in a similar exercise. In 2018, Kenya’s President Uhuru Kenyatta and his Swiss counterpart Alain Berset signed an agreement to recover assets stashed in Swiss banks.

In 2015, 12 years after the Anglo Leasing scandal which reportedly transferred US$700mn to foreign banks, was exposed, Kenya brought charges against 13 prominent Kenyans and foreign accomplices. This was the first time that powerful people in Kenya had been charged in a major financial scandal. The legal breakthrough was achieved after the unprecedented co-operation between Swiss authorities and Kenya’s Ethics and Anti-Corruption Commission.

The Kenyan case proves that fighting high-level corruption and recovering stolen assets stashed in offshore banks can only succeed if three parties are involved: aid donors, haven countries, and the states from which the thieving elites hail.