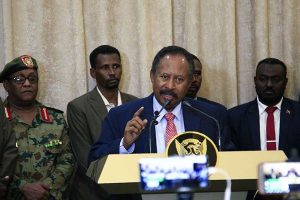 Sudan faces a long road to integration in the global financial system after the World Bank said it will not consider the country for more lending or debt relief until it clears arrears of $16 billion owed to creditors.

The World Bank’s Country Director for Ethiopia, Eritrea, Sudan and South Sudan, Kari Turk, said it would be difficult for international financial institutions to provide any support to Khartoum at the moment.

“The government needs to pay arrears to financial institutions and sovereign creditors of between $15 billion and $16 billion,” Ms Turk said during a stakeholder dialogue held in Khartoum on October 12.

The condition means that Sudan, whose prime minister Abdalla Hamdok has since coming to power in August called for the country to be removed from the US state sponsors of terrorism list, has virtually no leg room in accessing anything more than humanitarian aid.

Dr Hamdok has also called for debt relief to the country so that it can also access commercial loans from the Paris Club as well as countries like China that has poured billions of dollars worth of project finance into Africa.

The IMF, she said, was willing to support the country’s poverty and economic reforms once there is commitment to pay arrears.

“Reform is required at all levels. A commitment not to engage in other debts and the sustainability of the economy are a necessary component of debt relief,” she said.

Sudan’s sovereign debt is estimated at between $50 billion and 60 billion.

Removal of subsidies on basic items like fuel and bread, cost sharing in social services like health and education as well public sector wage reforms drove the protests from December last year that culminated in Bashir leaving office in April.

Hopes of containing the economic pain have increased with the new government where Dr Hamdok has pledged to improve living conditions, reform the civil service and build the economy’s productive capacity.

He has also pledged to fight corruption and enhance governance through the law and justice sector.

It is estimated Sudan needs $10 billion for economic recovery, including $2 billion to shield the Sudanese pound from battering by international currencies.

The conference was told that lasting peace was essential for economic recovery besides a sound monetary policy.

“Public institutions such as the Central Bank and the judiciary must enjoy the independence provided for by law,” Mr Suleiman said.

Among the institutions that would be reformed are more than 400 quasi government (grey companies), 98 of which do not contribute to the budget but remitted their proceeds to the ruling party and the military, according to the Sudan audit bureau.

“There must be a way to remove these franchises and bring them into fair competition,” Suleiman Baldou, a senior advisor at Kifaya Organisation, said, calling for recovery of stolen assets.

Security, transfers and subsidies account for 70 per cent of the national budget while health and education receive less than 10 per cent.

(Original story in the EastAfrican)