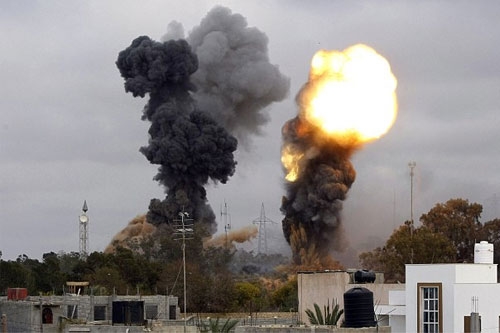 Haftar launched a new assault to unseat the UN-recognised government in April 2019, triggering some of the most significant fighting on Libyan soil since the battle to overthrow Col Muammar Gaddafi in 2011.

Foreign powers – notably Turkey, Qatar, the United Arab Emirates and Russia – are increasingly active in this new chapter of the war, leading to fears of another drawn-out proxy conflict similar to Syria.

What are the origins of Libya’s war?

Oil-rich Libya has been in chaos since the Arab spring movement and Nato bombing campaign that toppled Gaddafi in 2011. Attempts to build a democratic state after Gaddafi fell disintegrated into a new civil war between rival governments in 2014.

Armed groups, including extremists such as Islamic State, have proliferated and the lawless country has also become a principal transit point for people from across Africa who want to reach Europe.

Who is currently fighting whom?

Since 2014 the fighting has mainly been between rival centres of political power in east and west Libya: the Tripoli administration, known as the Government of National Accord (GNA), led by Sarraj, and the Tobruk administration, which decamped to the eastern city after disputed elections. The Tobruk government appointed Haftar to lead the Libyan National Army (LNA) and restore its sovereignty.

While the GNA is officially recognised by the UN as Libya’s legitimate government, it holds little power on the ground, and some distrust its Islamist politics. Haftar’s supporters say he is a bulwark against extremism, while others see him as another would-be military dictator.

What is the international community doing?

Over the last few years foreign powers have increasingly intervened in Libya’s civil war to defend their own strategic and economic interests. The GNA is backed by the UN and western countries, but its main allies are Turkey, Qatar and Italy. The LNA enjoys the support of Russia, Egypt, the UAE, Saudi Arabia and, to a lesser extent, France and Jordan.

The foreign parties have flooded Libya with weapons and drones, ignoring a UN arms embargo. Russia has sent mercenaries and Sudanese men have been recruited to fight alongside the LNA; in January the Guardian reported that Turkey sent Syrian recruits along with its own soldiers, to defend the Tripoli government.

High-profile peace talks in Berlin this year did not result in any lasting truce.

What is the humanitarian impact?

Under Gaddafi’s brutal rule, Libya had one of the highest standards of living in Africa. Now, the war economy has sent costs skyrocketing, and there are widespread problems with medicine shortages and power cuts. Civilians are in danger of getting caught in the unpredictable fighting – and kidnappings for ransom by militias are common.

More than 200,000 people are internally displaced and 1.3 million are in need of humanitarian assistance, according to the UN. Casualty numbers are highly politicised and hard to verify, with estimates ranging from 2,500 to 25,000 during the 2011 uprising alone.

The International Organization for Migration (IOM) estimates there are also about 636,000 migrants and refugees in the country, mostly from sub-Saharan Africa. Some are held in government-run detention centres and unofficial prisons run by armed groups, where conditions are horrific: detainees report unhygienic and overcrowded conditions without adequate food and water. Human rights watchdogs also say forced labour and abuse are rife.

What will happen next?

The loss of al-Watiya airbase is a heavy setback for Haftar and will help Turkey expand its air operations in the conflict on behalf of the Tripoli government. The LNA’s foreign backers are likely to step up their support in order to counter a string of Turkish successes since Ankara intervened in January.

The recent escalation in fighting comes despite increased international pressure on both sides to return to negotiating a political settlement and to halt the violence over concerns about the spread of coronavirus. Libya has reported at least 65 cases of the virus, including three deaths.

The article is originally published in The Guardian