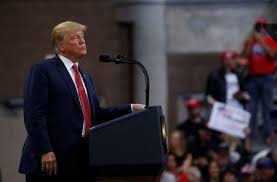 It’s never entirely clear how many of the attendees at one of President Trump’s numerous political rallies are representative of the local area. He tends to hold his rallies in cities because of the necessity of finding a venue large enough to sate his desire for a crowd — but cities tend to be much more hostile to Trump’s presidency. So people come in from all over, muddying the ability to determine how much of the fervor you see represents the mood where Trump is speaking.
That question, normally fairly unimportant, became much more important on Thursday night during a Trump rally in Minneapolis. During his speech, the president enthusiastically smeared Rep. Ilhan Omar (D-Minn.), as he has done before. He exaggerated and misinterpreted comments made by Omar to portray her as broadly anti-Semitic and anti-American.
Omar is a naturalized citizen who was born in Somalia and came to the United States as a refugee during Somalia’s civil war. She’s one of thousands of natives of Somalia who live in and around Minneapolis; support from Somali Americans is a key reason she won election to Congress in the very district where Trump was holding his rally.

‘She’s an American-hating socialist’: Trump attacks Rep. Ilhan Omar in her district
President Trump slammed Rep. Ilhan Omar (D-Minn.) during his Oct. 10 campaign rally at the Target Center in Minneapolis. (The Washington Post)
Knowing his supporters — if not the sentiment in the surrounding community — Trump on Thursday extended his disparagement of Omar as an individual to a criticism of Somali refugees and immigrants at large as unwanted.
“As you know, for many years, leaders in Washington brought large numbers of refugees to your state from Somalia,” he said to boos from the audience, “without considering the impact on schools and communities and taxpayers. I promised you that as president, I would give local communities a greater say in refugee policy and put in place enhanced vetting and responsible immigration controls” — applause — “and I’ve done that.”
“Since coming into office, I have reduced refugee resettlement by 85 percent,” he added to cheers.
It’s true that Trump has dramatically curtailed the number of refugees coming to the United States since his inauguration. From fiscal years 2013 to 2016, the country admitted an average of 74,000 refugees a year. In fiscal year 2017, which began while Barack Obama was still president, the annual cap was lifted to 110,000, a recognition of the ongoing conflicts in Syria and elsewhere in the Middle East.
When Trump took over in the middle of that fiscal year, refugee resettlements dropped significantly. (From October to December 2016, 10,000 refugees were admitted — about the same number admitted from January to September 2017.) For fiscal years 2018 and 2019, the Trump administration dramatically cut the maximum number of refugees allowed to come to the country.

The number of Somalis in particular dropped, due in part to the country being a focus of Trump’s entry ban. In fiscal year 2016, 9,000 Somali refugees came to the United States. In the first three months of fiscal year 2017 — until Trump was inaugurated — another 3,500 did. Since then, about 3,000 have been admitted, including fewer than 500 in the past two fiscal years.

This policy was public, if quiet. There were moments when Trump’s hostility to refugees would break to the surface, as when he referred to Haiti, El Salvador and African nations as “shithole countries” from which migrants were unwelcome. But generally, Trump’s anti-refugee sentiment was just a quiet policy change within his administration.
That was before the 2020 presidential election began to gear up. In his speech on Thursday, Trump offered a stark, hyperbolic warning to the audience.
“If Democrats were ever to seize power, they would open the floodgates to unvetted, uncontrolled migration at levels you have never seen before,” he said. “Do you think it’s bad now? You would never have seen anything like what they want to do, but in the Trump administration we will always protect American families first, and that has not been done in Minnesota.”

Again, the question is how much of the enthusiasm that met his comments came from Minnesotans or residents of Omar’s district. It’s unquestionable, though, that there is a strain of resentment in the area, targeting refugees and migrants.
In June, the New York Times’s Astead Herndon went to Minnesota to evaluate the extent of resentment among residents. He spoke with a number of Republicans in the area, including a member of the city council in St. Cloud.
“They’re becoming American citizens,” Paul Brandmire said. “And they have every right to, but this is killing us. This is the Hatfields and McCoys.”
A radio host named Bob Carrillo was less discreet, putting a picture of his grandchildren on the table while speaking with Herndon to emphasize the purported threat.
“They’re 2 percent of the population right now, and in 5 to 10 years they’ll be at 5 percent. At that point, we’re done for,” he told Herndon.

In Minnesota broadly, though, such sentiments are the minority. A poll conducted last October found that most Minnesotans disagree with Trump’s immigration policies, including two-thirds of those near Minneapolis. Half of those in the state’s capital said that the number of refugees allowed to come to Minnesota should return to pre-Trump levels — or be increased. Statewide, a quarter of respondents wanted to halt refugee immigration.
This is the ongoing tension of Trump’s politics. His rhetoric resonates with and energizes a number of often-vocal Americans even while a majority opposes what he’s doing. In 2016, the passion of the pro-Trump minority was enough for him to carry states such as Wisconsin and Michigan. His presidency and his 2020 campaign are predicated on the idea that invigorating that minority again will assure his reelection.
So, in Minnesota, the undercurrent of hostility to migrants again resurfaces. Maybe the people who were cheering him on weren’t from Minneapolis or even Minnesota, but they’re definitely going to vote Trump in 2020.