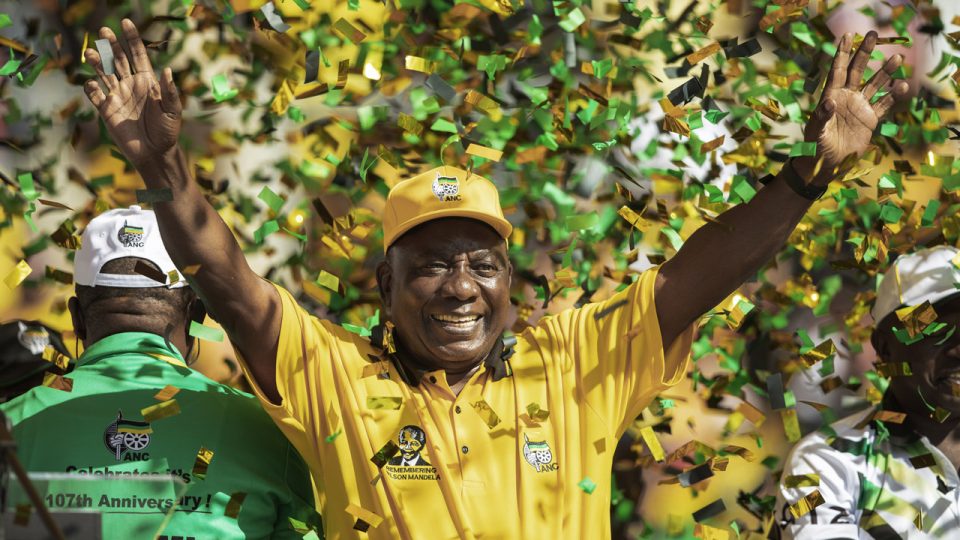 South African ruling party African National Congress President and South Africa’s President Cyril Ramaphosa waves at thousands of supporters after delivering his speech at the Ellis Park stadium in Johannesburg, on May 5, 2019 for the final campaign rally of the party ahead of May 8th legislative and presidential elections. (Photo by GIANLUIGI GUERCIA / AFP)

At a time when most South African middle class voters, black and white, confess that they have no party to vote for, two parties are holding their annual elective conference right now. One is the SACP the South African Communist Party, and two is EFF the Economic Freedom Fighters. A time there was when either was the party to run to when the others had destroyed themselves. Alas, this is no longer so. Let’s begin with SACP.There was a time when it was the Communist Party of South Africa CPSA. When CPSA was banned by the apartheid government, SACP was launched. It was also banned. SACP enjoys the distinction of being banned under apartheid and being unsavory under independence. It has lived a borrowed life as one of the tripartite partners in government since 1994 along with the ANC and COSATU the Congress of South African Trade Unions.

Obviously the weakest link, it is the one that has threatened most times to break away and stand alone. Founded in 1921, it was declared illegal in 1950. It was part of the struggle against apartheid. While the Communist Party has a ten page constitution in the archives of the South African History Online. Article III AIMS states: The Communist Party is the leading political force of the South African working class and its vanguard in the struggle for national liberation, socialism and peace in our time. The ultimate aim of the Party is the building of a communist society, towards which it is guided by the principles of Marxism-Leninism.Other than this communist party there are no animals today functioning around the world. With the collapse of the Soviet Union in 1989, communism collapsed.

The history of the participation of the SACP in the struggle and liberation of South Africa was done under the shadow of the ANC. That is why there is no separate history of the SACP on line. Since independence it has operated under the alliance partners. The central character and known representative of the party to South Africans is Blade Nzimande, the general secretary of the party since for ever. No wonder someone had to make the point that Nzimande is not the only member of the communist party!

What must be said is that the voice of the communist party has always been loud and clear against corruption and state capture. That is why there is no member of the party prominent in the list of the Zuptas.

The EFF, Economic Freedom Fighters, is completely the image of its leader Julius Malema. He began his politics in the ANC Youth League where most of the greatest radicals of the ANC have been formed. He helped to get rid of President Mbeki and to install President Zuma. But somewhere along the line he got to his Damascus and abandoned Jacob Zuma without abandoning the ANC. In fact he had to be expelled from the ANC. Today, he is being wooed to come back to the ANC. His conditions? The party must sack its then president Jacob Zuma and the party must change its name. The first condition has been fulfilled. Will the second one be fulfilled?

Anyway Malema formed the EFF, gave it a red servants uniform and began to torment the ANC and Jacob Zuma. Parliament became a show not to be missed. Both the then president and the speaker of the parliament as well as the party made fools of themselves defending Zuma. Finally, Jacob Zuma resigned and was replaced by his deputy Cyril Ramaphosa.

The EFF looks up to political leaders as Robert Mugabe of Zimbabwe and the late Hugo Chavez (d.2013) of Venezuela. His political agenda included black repossession of land without compensation.All breakaway parties from the ANC must be more radical and more populist than the ANC. So with EFF. And for young ones looking for a party to vote for, there was the EFF. And soon after its formation it became the third biggest party in the country. Very soon it was deciding which party would run municipalities. Perhaps this was the party to vote for?

Wait a minute! VBS, that is Venda Building Society was formed in 1982 and became a mutual bank in 1992. A report released in October 2018 found “evidence of wide-scale looting, fraud and corruption.” According to the report 16million plus rand of the money of the bank went to Brian Shivambu, younger brother of EFF senior politician Floyd Shivambu. The report also implicated the ANC deputy chairperson for Limpopo as well as the treasurer.

Right now, so much has been exposed of the criminalities of the presidency under Jacob Zuma along with his sons and his ministers and his friends the Gupta brothers. Members of the party as well as members of the government have skeletons in their cupboards. Should they begin to open up their skeletons, all hell will break loose!

But how can South Africa o forward without dealing with this rot in its body? Is there a place where half of its political class had been sent to jail for stealing?

Former DA Mayor of Johannesburg Mashaba is starting a People’s Dialogue. Former DA leader has joined the group. Who else will join them? What will they do with the group?

If the ANC could purge itself of its rot… if the DA could release those who race would not release to go freely forward to the new South Africa… if the various groups and individuals who have thought about groups like the people’s dialogue could come together. If they could file into an empty hall reciting the Freedom Charter mantra that South Africa belongs to all who lie in it black and white… perhaps anew beginning can be made…
bankole.omotoso@elizadeuniversity.edu.ng