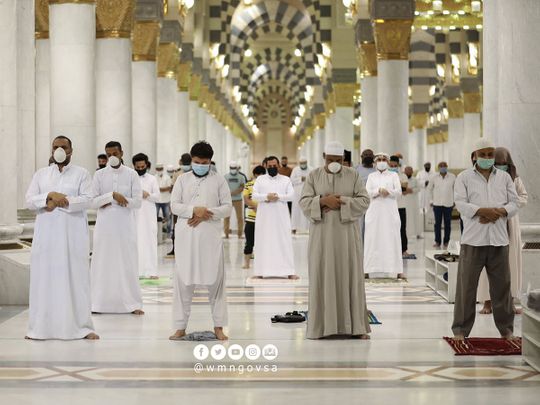 Taraweeh, Qyam and Isha’a prayers will be combined and shortened during the holy month of Ramadan in all of Saudi Arabia’s mosques, the Kingdom’s Two Holy Mosques Affairs Presidency said on Sunday.

The nighttime prayers during Ramadan, including Isha’a, Taraweeh and Qyam will be combined and will not exceed 30 minutes in all of the mosques across the Kingdom, state TV Saudia reported. This is a measure to reduce the time worshippers spend inside mosques as a coronavirus precaution.

The holy fasting month of Ramadan begins this week for the world’s more than one billion Muslims, during which observant believers fast from dawn to dusk. Taraweeh is an evening prayer performed during Ramadan, in addition to the nightly Isha’a prayer which is one of the five daily prayers.

The General Administration for Safety and Security at the Grand Holy Mosque will be implementing social distancing measures to prevent the spread of coronavirus among worshippers.

Thermal imaging cameras will be used to monitor those who enter the Grand Mosque, and the staff will work to disband any gatherings or mass crowding.

“After obtaining necessary permits, a total of 100,000 worshippers will be admitted to the Grand Mosque as per the Saudi Third Expansion,” SPA said.