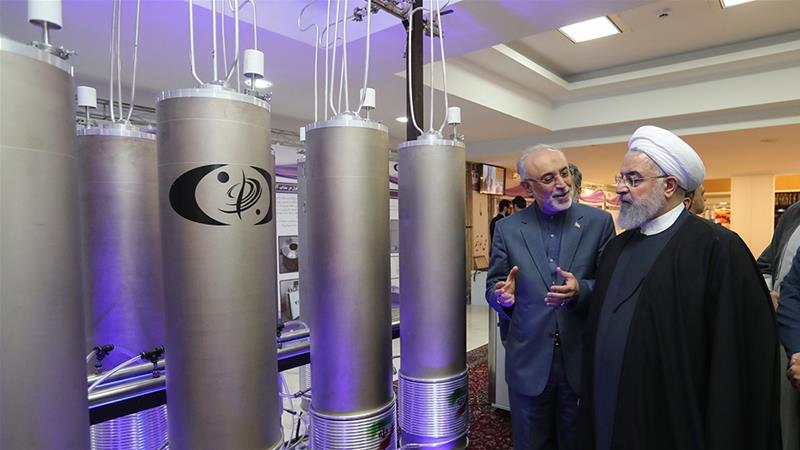 Iran says it would not respect limits set down in nuclear pact but remains open to negotiations with European partners.

Iran said it will no longer abide by the enrichment limits in its 2015 nuclear deal with world powers after its top general was killed in an air raid by the United States on Friday.

Sunday’s announcement means Iran is abandoning key provisions from the accord – negotiated between Iran, the five permanent members of the United Nations Security Council, and Germany – that prevent it from having enough material to build an atomic weapon.

Iran insisted in a state television broadcast it remained open to negotiations with European partners, who so far have been unable to offer Tehran a way to sell its crude oil abroad despite US sanctions.

It also did not back off of earlier promises that it would not seek a nuclear weapon.

However, the announcement represents the clearest nuclear proliferation threat yet made by Iran since President Donald Trump unilaterally withdrew from the accord in May 2018.

It also further raises regional tensions, as Iran’s longtime foe Israel has promised never to allow Iran to be able to produce an atomic bomb.

In response, the leaders of France, Germany and Britain urged Iran to abide by the agreement.

“We call on Iran to withdraw all measures that are not in line with the nuclear agreement,” German Chancellor Angela Merkel, French President Emmanuel Macron and British Prime Minister Boris Johnson said in a joint statement.

Iran’s announcement came after another Iranian official said it would consider taking even-harsher steps over the US killing of General Qassem Soleimani on Friday.

Iran’s state TV cited a statement by President Hassan Rouhani‘s administration saying the country would not observe limitations on its enrichment, the amount of stockpiled enriched uranium as well as research and development in its nuclear activities.

It did not elaborate on what levels it would immediately reach in its programme.

The International Atomic Energy Agency, the United Nations watchdog observing Iran’s programme, did not immediately respond to a request for comment.

However, Iran said that its cooperation with the IAEA would “continue as before”.

Soleimani’s killing has escalated the crisis between Tehran and Washington after the months of threats that have put the wider Middle East on edge.

The dispute is rooted in Trump’s decision to pull out of Iran’s atomic accord and impose sanctions that have crippled Iran’s economy.

Iran has promised “harsh revenge” for the US attack, which shocked Iranians across all political lines. Many saw Soleimani as a pillar of the country at a moment when it has been beset by US sanctions and recent anti-government protests.

Moving away from deal

In November, Iran stepped up activity at its underground Fordow nuclear plant – a move France said showed for the first time that Tehran explicitly planned to quit a landmark deal with world powers that curbed its disputed nuclear work.

Iran insisted that the latest move is not a violation of the nuclear deal, but is based on the Articles 26 and 36 of the agreement.

The incident involving an IAEA inspector appeared to be the first of its kind since the landmark deal was struck, imposing restraints on its uranium enrichment programme in return for the lifting of international sanctions.

The nuclear accord bans nuclear activity at Fordow, a plant located near the city of Qom and capped the level of purity for enriched uranium at 3.67 percent – suitable for civilian power generation and far below the 90 percent threshold for nuclear weapons-grade material.