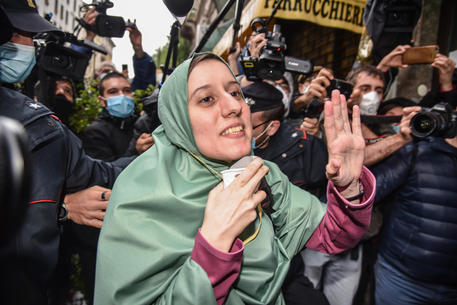 Silvia Romano, an aid worker who converted to Islam during an 18-month detention by Somali Islamist militants,, said Monday her new faith had comforted her during her ordeal.
Speaking to online daily La Luce two months after being freed, Romano said “after accepting the Islamic faith, I began to look on my destiny with serenity in my soul”.
Romano was crticised by rightwingers after converting, and a nationalist opposition League MP called her a “neo-terrorist” in parliament.
In the interview with La Luce, Romano said “I was desperate because I was living with the certainty of my destiny”.
She added: “faith has different gradations, and mine developed over time”.
Prosecutors have opened a probe into a campaign of Web-based hate against 25-year-old Milan native Romano, and police cars are patrolling the street where she lives.
Romano was freed at the weekend after 18 months in captivity by the Somali Al-Shabaab group, to whom she was handed over by a kidnapping gang who snatched her in Kenya in November 2018.
Foreign Minister Luigi Di Maio has denied an Al-Shabaab spokesman’s statement that the militants had received a four-million-euro ransom for Romano.
Hatred on social media has been directed against Romano’s conversion to Islam, the fact that has did not overtly criticise Al-Shabaab, her alleged naivety in travelling to a hotspot without proper protection, and the fact that her case has allegedly ended up funding terrorism.
A former League councillor in Veneto said she should be hanged, and League MP Alessandro Pagano spurred a row with his “neo-terrorist” remark.
Di Maio, former leader of the ruling anti-establishment 5-Star Movement (M5S), said “spine-chilling things have been said about Silvia, they have gone beyond any acceptable limit.” Romano has responded to the criticism by saying she adopted Islam freely and intends to remain in the faith. (ANSA).