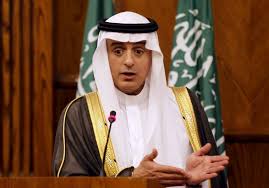 Saudi foreign minister, Adel Al-Jubeir, announced on Friday that all Yemenis including the Houthis, could have a role in the future of the country, news agencies reported.

Speaking at the Mediterranean Dialogues conference on the future of the Mediterranean in Rome, Al-Jubeir affirmed that there could be a settlement in the country, which would precede a solution to the ongoing conflict.

“There is a possibility to calm down the situation that will be followed by a settlement in Yemen,” he confirmed, according to the Saudi TV Channel, Al Arabiya.

“All Yemenis, including the Houthis have a role in the future of Yemen,” he declared.

Report: As Yemen war rages, children will suffer from hunger for 20 years

Meanwhile, he stressed that it was the Houthis who started the conflict, not Saudi Arabia.

Al-Jubeir also reiterated that Iranian interference in the war-torn country is “destructive” and that Iran is a threat to the entire region and its aggression can no longer be tolerated.

Saudi Arabia has been leading an Arab coalition to fight the Houthis in Yemen since March 2015. This intervention was made after the Houthis ousted the internationally-recognised government in Sanaa