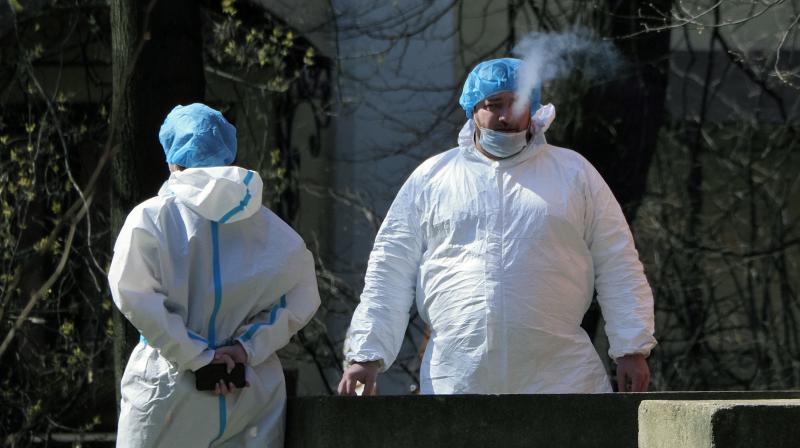 A medical worker wearing protective equipment to protect against coronavirus smokes as he and his colleague rest in the yard of the Pokrovskaya hospital in St.Petersburg, Russia. (AP)

May 7, 2020, 9:27 am IST
Many medical workers say they have been threatened with dismissal or even prosecution for going public with their grievances

Moscow: Two Russian doctors have died and another was seriously injured in falls from hospital windows after they reportedly came under pressure over working conditions in the coronavirus pandemic.

The exact circumstances of the separate incidents in the last two weeks remain unclear and they are being investigated by police, but they underscore the enormous strains that Russian doctors and nurses have faced during the outbreak.

Reports said two of the doctors had protested their working conditions and the third was being blamed after her colleagues contracted the virus.

Across Russia, doctors have decried shortages of protective equipment and questionable infection control procedures at dozens of hospitals, with many saying they have been threatened with dismissal or even prosecution for going public with their grievances. Hundreds of medical workers also have gotten infected.

Dr. Alexander Shulepov, who works on an ambulance crew in the Voronezh region, 500 kilometers (310 miles) south of Moscow, fell from a second-floor window May 2 at a hospital where he was being treated for COVID-19, breaking several ribs and fracturing his skull.

In a video posted earlier on social media by his colleague, Alexander Kosyakin, both complained about shortages of protective gear. In the video, the 37-year-old Shulepov said he was being forced to finish his shift despite being diagnosed with COVID-19.

But later, local health officials shared another video of Shulepov on social media in which he retracted his earlier complaints, saying he was being emotional.

Kosyakin was accused of spreading false news about the shortages after posting the video and is under investigation. He refused to comment to The Associated Press.

It is unclear what caused Shulepov’s fall. Some local media reports said he slipped while trying to climb from his window for a smoke outside, while others suggested it was due to the pressure for airing his complaints in public.