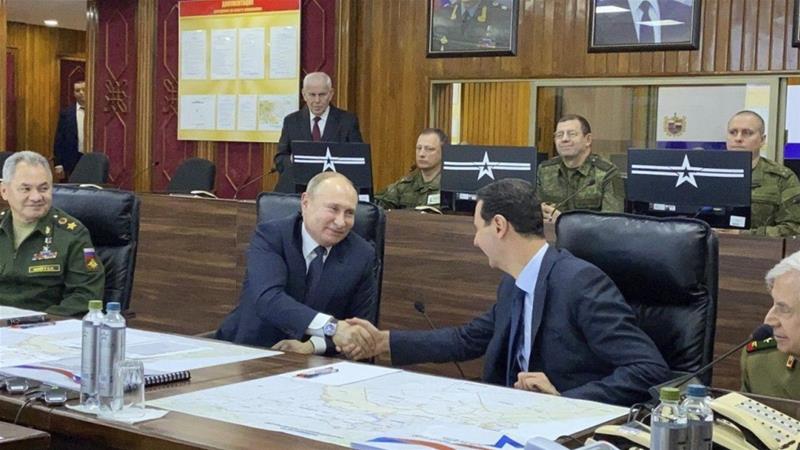 Russian President Vladimir Putin has met his Syrian counterpart Bashar al-Assad during a rare visit to the Syrian capital as the prospect of war between Iran and the United States loomed over the region.

Tuesday’s visit was Putin’s first to Damascus and second to Syria, a key Iran ally, since the start of the nearly nine-year war that Russian troops joined in 2015 to support the Syrian government.

The two leaders listened to a military presentation by the commander of Russian forces in Syria, the Syrian presidency said in a statement along with a picture of the two leaders shaking hands.

Putin extended his greetings to Russian forces for Orthodox Christmas which is celebrated on January 7.

He also said enormous progress had been made in the Syrian conflict, Russian news agencies reported.

“In his conversation with Assad, Putin noted that we can now say with confidence that a huge distance has been travelled towards restoring Syrian statehood and the country’s territorial integrity,” the agencies quoted Kremlin spokesman Dmitry Peskov as saying.

Peskov told Interfax, RIA Novosti and TASS that Putin met al-Assad at a command post for Russian forces in Syria, driving through Damascus on the way.

“Putin also noted that on the streets of Damascus, the signs of how peace has been restored can be seen with the naked eye,” according to Peskov.

He said the two men heard military reports on the situation in various parts of Syria, where Russia’s armed forces intervened in 2015 in support of al-Assad.

“The Syrian president expressed appreciation for the help of Russia and the Russian military in the fight against terrorism and the restoration of peaceful life in Syria,” Peskov said.

The Russian leader visited Syria in December 2017 but had not been to the capital, only stopping at the Russian base of Hmeimim on the Mediterranean coast.

The visit came amid heightened tensions between Iran and the US, following the killing of a top Iranian general in a US air raid in neighbouring Iraq.

Revolutionary Guard General Qassem Soleimani‘s death has sparked calls across Iran for revenge against the US.

US troops are based in eastern Syria, making the country a potential site of conflict with Iran.

Soleimani, who was killed on Friday in a US attack on Baghdad airport, was widely seen as one of the most powerful men in the region and the architect of Iran’s support for the Syrian army.

Tehran has reacted by vowing bloody revenge, as have the militias it controls in Iraq, while Parliament in Baghdad has voted to request a full US troop withdrawal.

Putin is expected in Turkey on Wednesday to inaugurate a gas pipeline with Turkish President Recep Tayyip Erdogan.