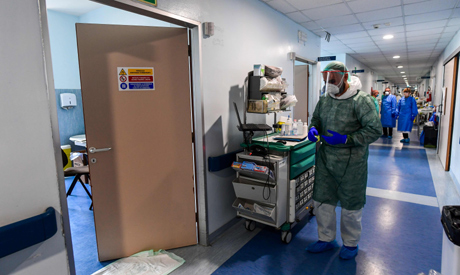 Male nurse Omar Semlali prepares to change himself in a special changing room (L) and dispose of his protective gear at the end of his shift on April 27, 2020 at the COVID-19 ward of the Cremona hospital, Lombardy, Italy AFP
AFP , Monday 27 Apr 2020
More than 150 Italian doctors have died of the novel coronavirus since February, the FNOMCeO health association said Monday.The toll among doctors had reached 100 on April 9. The health association said it now stood at 151.

Italy’s official death toll rose by 333 to 26,977 on Monday. It reported 1,739 new infections, the lowest number since the first half of March.

Prime Minister Giuseppe Conte has announced a gradual easing of Italy’s lockdown starting next Monday, when people will be allowed to take walks for the first time since March 9.

Most stores and other businesses will open by May 18, but restaurants will only resume dine-in service on June 1, when pubs and bars also open.