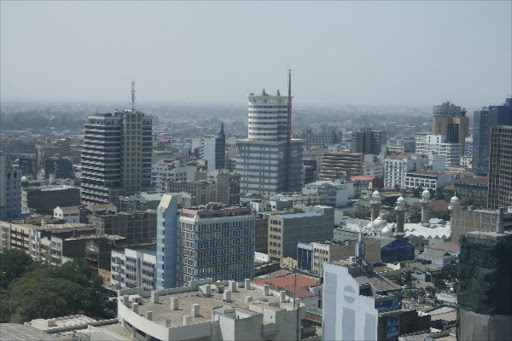 A section of Nairobi. Photo/Monicah Mwangi

• These cases are spread out in the four high-risk counties.

Out of 82 samples tested in the last 24 hours, nine tested positive for Covid-19 increasing Kenya’s Covid-19 cases to 25.

These cases are spread out in the four high-risk counties of Nairobi, Mombasa, Kilifi and Kwale.

“Nairobi, Mombasa, Kilifi and Kwale. We have always felt that these counties have extra exposure,” Kagwe said.

“We have also taken measures in those counties to create extra capacity and extra response mechanisms than would be in other counties”.

Out of the new nine cases, seven are Kenyans who were exposed to the virus from previously confirmed patients in the country while the remaining two are travellers from other countries.

On Sunday, Kagwe announced eight new cases of infection all being travellers who came into the country through JKIA between March 4 and 17.

Five were Kenyans, three were foreigners – two French and one Mexican.

The French nationals tested positive while in Kwale County.

They were residing at African Pearl Hotel in Diani before being isolated at Msambweni County Referral Hospital.

There are fears of more infections as the host hotel had nine guests and 36 workers during the French nationals’ stay.

“One of the French national was not stable because of his age and was rushed to Nairobi,” he said.

Meanwhile, at least 17 Kwale county officials are under self-quarantine including Governor Amason Kingi after his deputy Governor Gideon Saburi tested positive for the virus last week.

On Monday, Malindi MP Aisha Jumwa urged the government to give first priority to Kilifi County in the national war against the coronavirus pandemic.

She said the deputy governor could have infected more people than it was being implied.

Jumwa said the county had the department may not have the capacity to deal with the pandemic.

In a press statement on Monday, she said the patient has been roaming around for one week after jetting in the country from Germany and could have infected many people during his interactions.