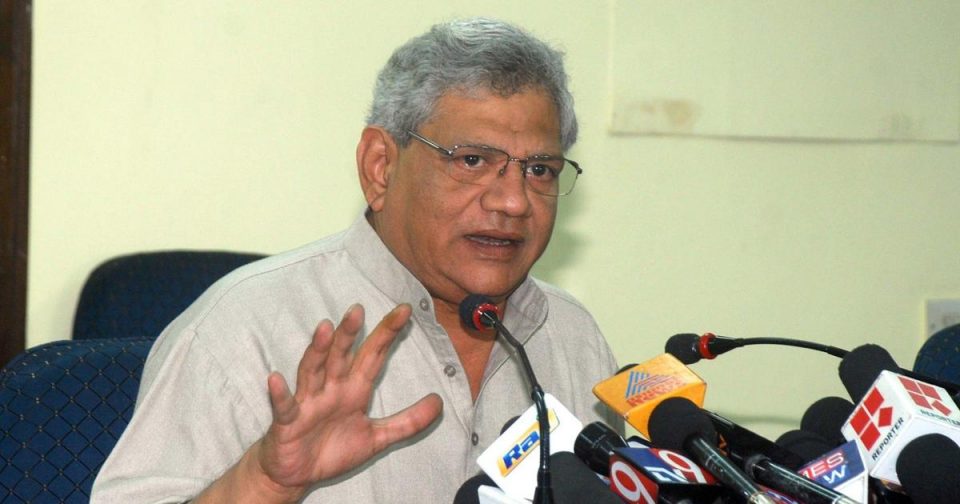 India’s secular political system is being dismantled – and the Hindu-nationalist BJP are relying on the support of the international right. Ben Chacko spoke to Communist Party of India (Marxist) general secretary SITARAM YECHURY about the fascist spiral of ‘the world’s biggest democracy’

INDIAN politics is casting a shadow over our general election. Overseas Friends of the BJP (the party of India’s Prime Minister Narendra Modi) have reportedly identified 48 Labour-Tory marginals in which the organisation would campaign for a Conservative vote because of Labour criticism of events in Kashmir.

Just this week, Labour issued a statement clarifying that it would “not take a pro-Indian or pro-Pakistan stance on Kashmir,” in a bid to pacify Indian organisations that had attacked the party over its conference resolution on the crisis in the region. Actually, Labour had not taken a “pro-Indian or pro-Pakistan stance” by expressing concern at the Indian government’s behaviour, but the concession showed that Modi’s supporters in this country pack a punch.

Should that worry us? I spoke to Communist Party of India (Marxist) general secretary Sitaram Yechury to find out more about how Modi is changing the face of India.

Yechury is well aware of the crisis in Kashmir. He was detained and deported from it twice following Modi’s revocation of Article 370 of the constitution. The article barred Indians from other states from purchasing land or property in Jammu and Kashmir, a guarantee for the only Muslim-majority state in India that it would not be vulnerable to forced demographic change.

The CPI(M) leader was visiting the state to see Mohammed Yousuf Tarigami, the party’s Jammu and Kashmir state secretary and an elected member of the state assembly from 1996 until it was dissolved at the end of last year. Like most Kashmiri political leaders, he was placed under house arrest while the Indian government went about dismantling Jammu and Kashmir’s political structures.

“He faced no charge, but he was not allowed to leave his house and no-one was allowed to go in. Twice I tried to reach him and was deported from Srinagar.” In the end, Yechury obtained an order from India’s Supreme Court allowing him to go and check on Tarigami’s health, following which he got an affidavit allowing his comrade to go to Delhi for medical treatment.

“All these arrests were made on the pretext of confronting Pakistani terror,” Yechury says, “but our party leader was elected from a district which the BJP’s own home minister has called the worst affected by terrorism in the state. He was elected for fighting terrorists. He’s been targeted four times, escaping with injuries, has lost family members. And he’s under house arrest? That was politically motivated.”

The way in which Jammu and Kashmir has been dissolved as a state and replaced by two “union territories” (one retaining the name, the other taking the name Ladakh) was “a gross violation of the Indian constitution,” Yechury contends. “Article 3 states that the boundaries of any state cannot be altered without approval of the elected state assembly. To bypass that they dissolved the state assembly and appointed a non-elected governor.”

But was the aim of the whole operation demographic change in Kashmir?

“Yes. They seek the integration of Kashmir’s land and its natural assets, but not of its people. This is the only state with a Muslim majority in India.

“This has been a signature goal of the BJP all along, one of three key demands: abrogate Article 370 and end Kashmir’s special status; build the temple [to Rama in Ayodhya on the site of the razed Babri Masjid mosque — the Supreme Court approved this project last weekend]; and introduce a uniform civil code whereby the religious variety of India’s diverse population will be ironed out in a way that suits them.

“People in Kashmir are frightened. The question I kept being asked was, ‘Will we become India’s Gaza?’”

I point to comments by BJP MPs like Surendra Singh, who has said that India will be “exclusively Hindu” by 2024, with non-Hindus given a choice between conversion and exile. But surely the idea of driving out India’s hundreds of millions of Muslims and Christians is impossible.

“Yes. But they can become second-class citizens. What is happening in Kashmir is part of a larger project.

“During the course of India’s struggle for freedom from British rule, three distinct visions emerged. The forerunners of the Congress party held that given India’s diversity, it could not become anything but a secular democratic republic.

“The Communists agreed but regarded that as insufficient. We held that India should move on the basis of secular democracy towards economic independence and socialism.

“But there was a third approach, which held that India’s character would be determined by the religious affiliation of its people. The Muslim League pushed for an Islamic state. The RSS (Rashtriya Swayamsevak Sangh, a paramilitary organisation from which the BJP emerged later as the political arm) pushed for a Hindu state.

“The unfortunate partition of India created the Islamic state — Pakistan was formed. But India remained a secular democratic republic. The biggest complaint of the RSS was that it had not won its Hindu state. The almost immediate assassination of Gandhi was because they saw him as the person responsible.

“Since then, the RSS and the BJP have never ceased to fight for the replacement of the republic with a theocratic, fascistic Hindu nation.”

That fight has by no means been a peaceful or democratic one. I raise the way RSS thugs break up and attack Muslim, Christian and left political meetings, and their assault on the millions of women who took part in the Women’s Wall in Kerala at the beginning of the year. The organisation seems as close as any in the modern world to fascism’s street-fighter wings of the 1920s and ’30s, the Blackshirts and Brownshirts.

“Yes, and one of the inspirations for the RSS was Hitler. They have stated that ‘the way Hitler chose to maintain the purity of the German race is a lesson for us in Hindustan to draw upon.’ The RSS is heavily involved in attacks on communists and trade unionists. It identifies three internal enemies of its Hindu state: Communists, Muslims and Christians. And we have been targeted for political destruction, first in West Bengal, then in Tripura, most recently in Kerala, though it is not really succeeding there because of the progressive traditions of Kerala and the social influence of the left. But they are trying administratively to destabilise the Keralan government.

“Since the defeat of West Bengal’s Left Front government in 2011, 278 of our comrades have been murdered in the state. At the same time as attacking the left, they are disenfranchising Muslims. Take the National Register of Citizens in Assam. Two million people born there have now been deprived of citizenship. The register there is part of a long-standing dispute specific to Assam, but the BJP now wants to extend this to all India.

“The point is clear — to exclude minorities, mainly Muslims. Many of those in Assam denied citizenship are actually not Muslims. So Modi to appease them has announced a Citizenship Amendment Bill stating all non-Muslims who have come to India as refugees from nearby countries will be granted citizenship. This is a direct violation of the constitution, which guarantees rights ‘irrespective of caste, creed or sex.’ The existing constitution is being abandoned.”

But surely this project is meeting bitter resistance across India?

“Not widespread resistance. They have built a narrative following terrorist attacks, built a communal, nationalist, jingoist ideology chillingly reminiscent of that generated by Mussolini and Hitler. Under its sway, a large section of the people have been carried away.

“Recent electoral defeats for Modi in two state assemblies and many by-elections suggest that the impact of this narrative is waning. Indians are responding to a day-to-day reality of increasing misery, recession, unemployment that’s at a half-century high, deepening agrarian distress.”

Though Yechury agrees that the Congress party bears much of the blame for Modi’s initial election, he warns that the future being shaped is bleak — “an India minus the Congress, minus the Communists. An India that has no opposition parties. Most prominent opposition politicians face criminal charges of one kind or another.

“Internationally, India has changed too. The days of the non-aligned movement, the independent foreign policy are gone. We have been reduced to a subordinate ally of the United States. We are increasingly a part of the US project of containing China, our biggest and most powerful neighbour. It’s not in our interests.

“For Donald Trump’s political support of Modi, India is paying a heavy price. Relations with all our neighbours have deteriorated.”

That international alignment, more even than Kashmir, might explain why BJP supporters are rooting for Boris Johnson in Britain’s general election.

“Modi’s biggest allies are Trump, Netanyahu and Johnson. He pledges the support of the Indian diaspora for them. As prime minister, he campaigned for Trump — which was unheard of in diplomatic relations.

“And in the UK, his local units are calling on people of Indian heritage to vote Tory. It’s gross interference in another country’s politics. But Modi requires the support of right-wing regimes abroad that sanction his destruction of Indian secular democracy at home.”