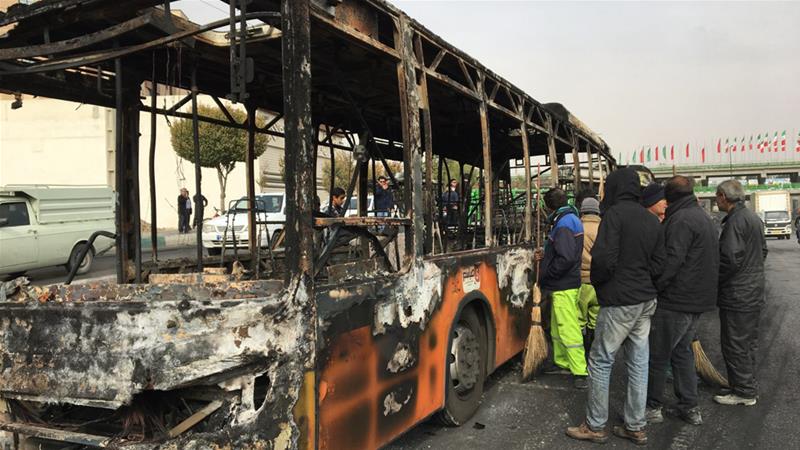 President Hassan Rouhani warned on Sunday that “anarchy and rioting” would not be tolerated after fuel price hikes led to deadly mass protests throughout Iran.

An estimated 87,000 people took part in the demonstrations, the semi-official Fars news agency reported, and at least two people were killed.

Dozens of banks and stores were set on fire or damaged in the violence and about 1,000 arrests were made.

“People have the right to protest, but that is different from riots,” Rouhani was quoted as saying. “We cannot let insecurity in the country through riots.”

It’s unclear how many people have been killed or wounded as videos from the protests have shown people gravely wounded. Access to the internet was also severely curtailed by the authorities.

Iran’s intelligence ministry said in a statement the protest leaders had been identified and “appropriate action” was being taken.

The United States on Sunday condemned the use of “lethal force” and “severe communications restrictions” against demonstrators in Iran.

“The United States supports the Iranian people in their peaceful protests against the regime that is supposed to lead them,” the White House said in a statement. “We condemn the lethal force and severe communications restrictions used against demonstrators.”

Rouhani defended the government’s move to double the price of fuel saying the money earned would be used to help impoverished Iranians amid the economic fallout of crippling US sanctions.

It is a rise many consumers can ill afford given that Iran’s economy has been battered since May last year when President Donald Trump unilaterally withdrew the US from a 2015 nuclear agreement and re-imposed sanctions.

The rial has plummeted, inflation is running at more than 40 percent, and the International Monetary Fund expects Iran’s economy to contract by 9.5 percent this year and stagnate in 2020.

The petrol plan is expected to generate 300 trillion rials ($2.55bn) per annum, from which the government says about 60 million needy people would receive social welfare payments.

“For this … we should either increase taxes on the people, export more oil … or reduce subsidies and return the revenues to the people in need,” said Rouhani.

Iran’s Supreme Leader Ayatollah Ali Khamenei said on Sunday “some lost their lives” in the violence and blamed “hooligans”.

Khamenei also pointed a finger at opponents of the Islamic Republic and foreign enemies for “sabotage”.

“All the centres of the world’s wickedness against us have cheered” the street protests, he said.

Several people were also wounded and dozens arrested in the demonstrations that saw motorists block highways and others torch public property.

A 24-hour internet blackout appeared to have stemmed the flow of images shared on social media with only officials’ accounts and local news agencies still active.

Semi-official news agency ISNA said the protests had “mostly subsided” by Sunday evening, a report that could not be verified because of the online outage and limited news from agencies.

NetBlocks, an internet monitoring website, tweeted: “Iran is now in the midst of a near-total national internet shutdown”.

Some of the worst violence seen so far was in the central city of Sirjan, where acting governor Mohammad Mahmoudabadi said a civilian was killed and petrol stations were among the public property attacked and damaged.

In Kermanshah, a policeman died on Sunday a day after a “confrontation with a number of rioters and thugs”, the provincial police chief told IRNA news agency.

Anti-Blackness in the Muslim World: Beyond Apologetics and Orientalism