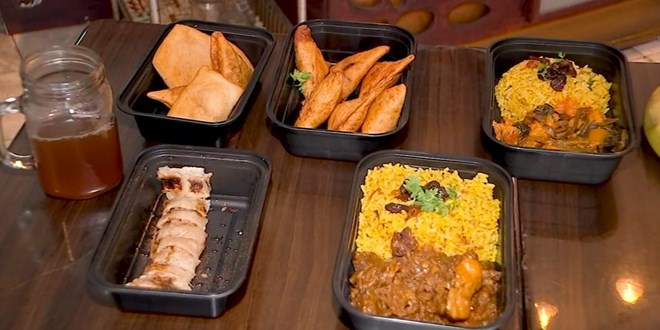 Translating into “journey,” it’s widely regarded as the only Somali restaurant in town.

When Maymuuna Birjeeb opened her Harlem-based restaurant Safari over six years ago, she had little notion it was once the site of a social haven—a lively spot to enjoy a cup of tea or have a smoke—in the 1950s for fellow Somali immigrants in NYC.

While Birjeeb (who goes by Mona) sees more people of Somali descent in today’s Harlem, traces of the neighborhood’s historic ties to her East African homeland have long faded. It’s a void she and her husband Shakib Farah, who is also the restaurant’s co-owner and chef, aim to fill with Safari—widely regarded as the only Somali restaurant in NYC.

“I was reading the history of the time, and before the war in Somalia, there were Somali seamen who used to come to Harlem—particularly to that area,” says Birjeeb, who was born in the southern port city of Kismaayo and grew up in Sweden (Farah, her husband, hails from Galka’ayo in northern Somalia). “I just came across it, sometimes there is a spiritual connection that leads you.”

As the first African and Islamic immigrants to come to the United States in the early part of the 20th century, Somalis arrived as sailors from British Somaliland. Mid-century, they made their way to Harlem and for decades, ran businesses there (delis, clothing shops, markets), with the majority closing for good by the late 2000s after civil unrest in Somalia led to migration shifts (little has been documented of these early decades though, either written or photographed).

In Swahili, the word safari means “journey,” an apt name for the origins of both the restaurant and its Somali owners—reflecting their migration to America; becoming first-time restaurateurs in NYC; and re-introducing the culinary legacy of Somalia on 116th street, an area known today as Le Petit Sénégal.

“I’ve always been around women cooking in our home, my mom and older sisters,” says Birjeeb. As one of the youngest in the family, she was often sent to purchase staples that needed replenishing, like cumin or rice. “I’m the one who used to go to the market to buy everything, helping them is how I got introduced at an early age to food.”

The aromas of her mother’s cooking and watching her sister’s hand at the stove flooded her memories when she came to New York. And though she saw Ethiopian, Senegalese, and other restaurants of the African diaspora in Harlem, none were Somali. Beyond that, New Yorkers, she soon learned, had an impression of Somalia that was limited to models in magazines and pirates at sea, predicated largely by the media.

Despite that, friends in the city were curious about the food of Somalia; even in her previous career (she worked in finance, her husband, Farah, in engineering), clients would ask if she knew where they could enjoy Somali food. She realized then that there was genuine interest in the cuisine, and after speaking with Farah a decision was made—it was time to take the leap.

Opening its doors in the spring of 2015, Safari introduced new audiences to its globally influenced cuisine, quickly garnering recognition for its deeply-hued, spice-laden dishes like hilib ari, goat marinated for six hours and placed atop basmati rice; beef suqaar, sautéed meat infused with rosemary and mitmita, a Somali spice mixture; and the ever-popular sambusas, deep-fried golden triangles housing meat or vegetables. There was also bisbaas, the lime-hued piquant sauce that silhouettes many Somali dishes. Safari’s bisbaas (available for purchase at their online shop) is a longtime family recipe that Birjeeb enhances with her own additions.

Since its debut, Safari has spotlighted the tumultuous richness of Somalia’s culinary roots. In addition to Italy’s half-century long colonization in the late 1880s, which led to the introduction of pasta, Somali food is flecked with impressions of its spice trade partners—Indian, Arab, and Persian cuisines—resulting in cross-over dishes which remain today, like: xalwo, a carrot-based dessert similar to halva, which has roots in South Asia and the Middle East; and canjeero, a fermented flatbread akin to the South Indian dosa.

Throughout the years, Birjeeb has continued to champion the culture of Somalia and share the cherished practices of their Islamic faith at Safari, often inviting the community to gather and celebrate together. She also decorated the interior with wooden carvings of Somalia’s ancient writing script; exclusively plays music from the East African nation (which, to her delight, customers cannot resist dancing to); and introduces guests to the tradition of eating a banana in tandem with a meal, the intent being to balance the intensity of spices like paprika and cumin. In addition, every year, she and her husband invite customers and friends to celebrate Ramadan, with 2020 being the first time they could not do so due to the pandemic; in 2018, they hosted an Iftar dinner at Gracie Mansion with the mayor; and in 2019, they welcomed Minnesota Congresswoman and fellow Somali native, Ilhan Omar.

Despite the success Safari has seen, at present, it has been a marathon of endurance, weathering over 18 months of pandemic-era setbacks. In the early days of COVID, Birjeeb says they had to shut down, with no PPP funds or resources. Because they were primarily dine-in, adopting a takeout model was a complete upheaval.

Then she and her husband saw the community who surrounded them—not only their regular customers but those in the vicinity who had far less—and reopened, offering takeout as a tiny team with limited resources. Last spring, they donated meals to Harlem Hospital, NYU Langone, and first responders in the area, and when summer began, they built an outdoor bar area to welcome locals back to their tables.

Part way through the COVID-crisis, Safari started serving breakfast outdoors to expand their menu (currently served beginning at 9 am, Wednesday to Sunday). Birjeeb’s mandazi, a traditional Somali sweet bread, has been such a hit that a customer recently pulled out a notebook with pen poised, ready to take down the recipe.

The restaurant will also be a featured local vendor at the upcoming Thrillist Block Party taking place in Harlem on September 12. However, just the other week, their outdoor bar setup was vandalized, with the culprit breaking glassware and damaging the structure. The one savior was no one entered the interior of the restaurant—and it’s these moments of grace that give Birjeeb the strength to continue, channeling the strength to persevere, much like the courageous Somalis who preceded her.

“That’s the thing, what you put into your mind, I feel that you can do it,” says Birjeeb. “Even though there are obstacles, there are a lot of things that come after. I believe strongly, you just have to push forward.”

Three Lessons from a Two-Decade Failure