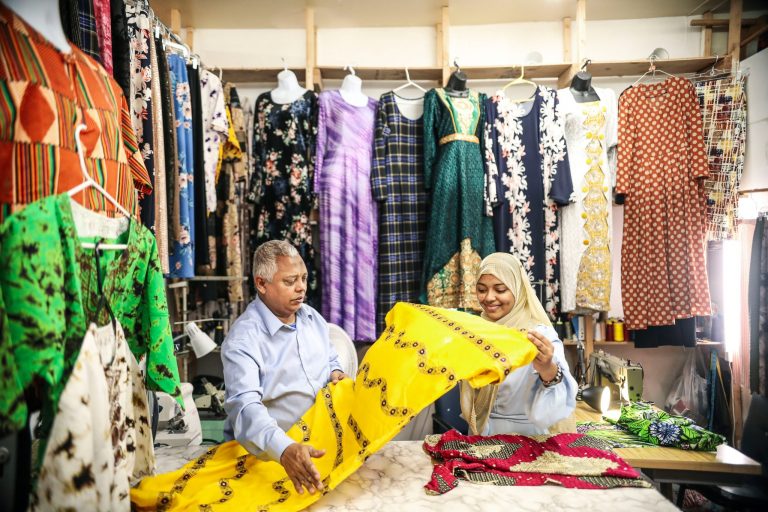 Ali Awow fled civil war at home and spent a year in a refugee camp in Kenya before making his way to Southern California. Now he is running a custom clothing shop.

SAN DIEGO — For about as long as he can remember, Ali Awow has known how to sew.

His father taught him as a boy in Mogadishu, the capital of his native Somalia, on a foot-powered machine. His father, grandfather and great-grandfather had learned the same way. “Back then, we didn’t have electric machines,” he recalled recently.

Mr. Awow, 50, was sitting behind his desk in the modest shop he opened three months ago — in a stall inside a Somali market in the City Heights neighborhood of San Diego.

“This is a busy place,” he noted, as shoppers streamed by.

All around him — hanging on the walls and arranged in piles in the hallway — were bright, flowing garments: dresses, skirts and, for men, colorful African shirts. On a small counter in the corner, by an upturned iron, lay a Quran. His oldest daughter, Anisa, 18, sat nearby. “Sometimes he makes clothes for me,” she said. “But only when he has time.”

Three years ago, Mr. Awow, his wife and three children relocated to California from Nairobi, Kenya, where Anisa and her siblings were raised. Mr. Awow had fled there from Somalia with his own siblings during the country’s civil war.

Though Mr. Awow had experience running a tailor shop, starting one in the United States was not going to be as easy as it had been in Africa. “In Kenya, if you’re a small business, you don’t need to worry about paying taxes or anything like that,” he said.

To get help, Mr. Awow contacted the International Rescue Committee, one of the seven organizations supported by The New York Times Neediest Cases Fund. He enrolled in six weeks of vocational English training before joining the committee’s Microenterprise Development program, which provides coaching for small-business owners.

In December 1990, when he was 21, Mr. Awow fled Somalia for Kenya in a boat crowded with about 200 other refugees. By then, about 50,000 people had died in Somalia’s civil conflict and hundreds of thousands had fled.

“Before the civil war, Mogadishu was a paradise,” said Mr. Awow, whose parents died in the war. “But after it started, everything changed. Everyone was killing each other.”

It took Mr. Awow eight days to reach Mombasa, Kenya, where he spent a year in a refugee camp before moving into a home owned by an uncle. It was in Mombasa that he set up his first business. He worked there for about two years, selling clothes and performing basic tailoring repairs from a small table on the street, before he, his brother and two sisters moved to Dar es Salaam, Tanzania.

There, Mr. Awow opened his first proper shop. He bought two sewing machines and, relying on word-of-mouth recommendations, built a steady customer base. Life there, while not perfect, was good. “I was very happy,” he recalled. But in 1998, after four years in Dar es Salaam, Mr. Awow moved to Nairobi, where prospects were said to be better for Somali refugees.

Again, he set up shop. Business in Nairobi was even better than it had been in Dar es Salaam. Mr. Awow began including a tag on his garments with his name and number. The marketing strategy paid off. Phone orders poured in from as far as South Africa, New Zealand and the United States. Soon Mr. Awow met his wife, Fahmiya Habib Karima. With his business prospering, the two started a family.

In 2016, when the couple already had three children, they were granted asylum in the United States with support from Jewish Family Services, a resettlement agency. They moved to San Diego, which is home to a modest but well-established Somali community, and were able to find an apartment and enroll the children in school. (It helped that the children knew English from growing up in Kenya. Today, two are in college and one is in high school.) Besides a few sample garments, Mr. Awow brought no business supplies; he was once again starting from scratch.

With the help of a business counselor at the International Rescue Committee, Mr. Awow was able to navigate the nitty-gritty of American commercial life: getting a seller’s permit and a business license, finding a location and a suitable lease agreement, and paying taxes. Financed by three-year federal grants, the Microenterprise Development program eases refugees into the economy by helping small-business ventures. In the San Diego area, it has assisted more than 850 immigrant- and refugee-run businesses like Mr. Awow’s since 2003. (Ms. Habib Karima, who runs a day care center, has also received assistance from the organization.)

“We basically have to walk them through every step of the way,” said Irene Bwayo, Mr. Awow’s counselor at the agency. “But Ali is a very skilled businessperson. He definitely knows what he wants.”

Though it has been only three months, business so far in the Somali market has been steady, Mr. Awow said. It helped that he had already established a modest reputation in the community; before opening the shop, he taught sewing classes for several months at a local Somali association, and he handled some custom orders from his home. He continues to make the same styles he was making in Africa, though the bulk of his sales so far have been in women’s clothing. Clients sometimes show him pictures on their phones to give him a sense of what they want. One garment represents anywhere from one to three hours of work, he said.

Mr. Awow still receives business guidance from the International Rescue Committee, and he continues to take English classes. Eventually, he hopes to expand his shop to a larger storefront. For now, he said, he is grateful for the agency’s support and is happy to be running a business again.

“I’ve always preferred to work on my own to support my family,” he said. “I don’t want to work for anybody but myself.”