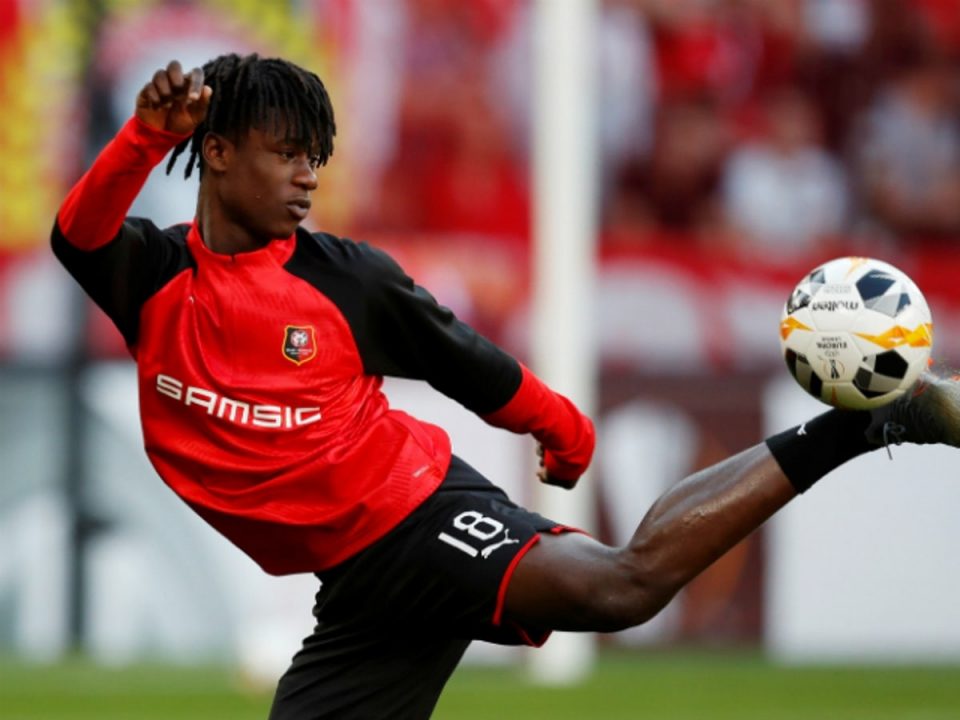 Manchester United are reportedly set to meet Eduardo Camavinga’s entourage next week ahead of a big-money move for the Rennes starlet.

RMC Sport state that United have formally made their interest in Camavinga known and that talks between the Red Devils and the teenager’s agent have already begun with further discussions set to take place in the next few days.

Camavinga has just 12 months remaining on his current contract and has also been linked with PSG and Real Madrid.

Rennes could be keen to cash in to avoid losing the 18-year-old on a free transfer.

United are set to turn their attentions to Camavinga once they wrap up Jadon Sancho’s transfer from Borussia Dortmund.

The Old Trafford club still need to agree on a price with Dortmund for Sancho, but this is expected to go through soon – perhaps even before the end of the Euros.

Camavinga has already been capped three times by France, scoring on his first start against Ukraine.

Earlier this year his agent Jonathan Barnett believed his client would be the subject of some big bids in this summer’s transfer window.

“We don’t want to rush. There is the right time to move on and playing games is the most important thing at his age.

“He’s probably the best young player in the world. He has just turned 18.

“He’s an unbelievable talent. He could play in any team in the world.”

Camavinga, though, is yet to give any clear indication of where his future lies.

Back in September, he said: “Certainly when a big club is interested, it is nice. But I am not getting carried away.

“I took this choice with my family [to stay at Rennes]. We are happy to have made this decision. I just need to focus on football and not think too much about everything else around it.”

Angola-born Camavinga made his debut for Rennes at 16 and has had a stadium named after him near Fougeres, where he grew up, in Brittany.

The 28-year-old midfielder, who has one year remaining on his current deal at United, is wanted by West Ham this summer after making a huge impact during a five-month loan spell, where he netted nine goals and five assists in 16 games.

Last month, Bruno Fernandes even labelled his teammate “the best player in the Premier League” after his terrific form under David Moyes. “Everyone here is really, really happy for him,” Fernandes said. “He has confidence back, he has his swag back, because he is feeling confident.”

A rejuvenated Lingard certainly enjoyed his time in East London but according to The Daily Star, The Hammers are ‘struggling’ to meet United’s £25 million valuation and £110,000-a-week wages.

In fact, the report claims United have ‘complicated the situation’ by putting an improved contract on the table worth £130,000-a-week.

There will also be an option to trigger another year on Lingard’s contract.

It remains to be seen whether Lingard will accept the deal or not but a key factor in his decision will be regular first-team opportunities.

“Regular football is the most important thing for me,” Lingard told Sky Sports.

“After going on loan and getting a good run in the team, you started to see the real me, with the goals and the assists.

“I’ve never doubted my ability, I’ve always believed in myself. I spoke to the manager [Solskjaer] in pre-season and said, ‘I need game time’. He said, ‘We can discuss it December time’, and we spoke again and he agreed to let me go on loan.

“I had various conversations with him during my time at West Ham. He was very supportive and it was a great loan for me.”

Do you think Lingard should stay at Manchester United or go elsewhere?

Let us know in the comments.

Carlo Ancelotti reportedly has his eye on a move for Manchester United full back Diogo Dalot, which could help the Premier League club’s summer transfer plans.

Dalot was signed by Jose Mourinho from Porto in 2018, having only played eight times for the Portuguese team, for around £19 million.

Though he showed early signs of promise, it really hasn’t worked out for the right back so far in England and he went on loan to AC Milan last season.

That move didn’t really work out either, as he spent much of the season as backup and he has now returned to United, although he’s currently playing for Portugal at the Euros.

Now though his fortunes could be about to change, Portuguese outlet Correio da Manha, via Sport Witness, claim that Ancelotti wants to bring Dalot to the Bernabeu.

Los Blancos were following the 22-year-old before he moved from Porto to Old Trafford, but the report says it’s their new manager who wants to sign the full back.

The former Everton boss, who has replaced Zinedine Zidane after the Frenchman no longer felt he had the club’s backing, wants to ‘rejuvenate’ the Real defence.

Sergio Ramos has already left the club and he only has Dani Carvajal and Alvaro Odriozola at right back in his squad at the moment.

The interest in Dalot is certain to prick up the ears of those involved in transfers at United, with the club not giving up their hopes of signing Raphael Varane, despite Ramos’ departure.

United would surely be interested in trying to bring the centre back’s price down, especially if they can use a player Ole Gunnar Solskjaer wasn’t interested in a year ago to help.

As well as the move for Varane, Real’s interest in Dalot could help their transfer plans in another way, with Solskjaer reportedly interested in Atletico Madrid right back Kieran Trippier.

The Spanish champions reportedly want as much as £40 million for the former Tottenham Hotspur full back and losing Dalot would accelerate their need to sign cover for Aaron Wan-Bissaka.

United want more attacking threat down their right side, with interest in Borussia Dortmund’s Jadon Sancho coming to a conclusion as well, and Trippier would certainly bring that.

Manchester United legend Andy Cole has insisted that Edinson Cavani‘s arrival at Old Trafford could bring the same impact as Zlatan Ibrahimovic did.

The Uruguayan striker was linked with Benfica and Atletico Madrid in recent weeks, but he is now expected to complete a move to United before the window shuts today.

United have received some backlash over their deal for Cavani due to the wage demands and the Uruguay international’s age.

However, Cole hasn’t ruled out the possibility that Cavani could replicate the impact of Ibrahimovic and praised the United target for his proven goalscoring record.

“Hopefully, he’ll work out like a Zlatan. Zlatan was unbelievable, not just around the place but as a person.

“I spent a bit of time with him, what a funny guy he is. He always believes in himself but also tries to bring the rest of the team on as well.

“If you look at Cavani’s record, he’s an individual who will get the little tap-ins, he can pick the ball up and take on a couple of players and put it in the top bin. He has those qualities.

“If you watch him over his career, wherever he has gone — I watched him numerous times at PSG — some of the goals he gets are really good quality striker goals, and that’s what Manchester United need.

“Yeah, we can say they need a centre-half, they need a left-back, a midfielder, the list could be endless, but now they’ve got a proven goalscorer who you know can get goals in the Premier League.

“[Anthony] Martial is still a baby, he’s still learning his job. We all know how good a player he is, but on the flip side of that, he can be a little bit inconsistent. A lot of Man United fans want to see him do it week in, week out.

“Someone like Cavani coming in, we know what we’re going to get — proven goalscorer, he works extremely hard, he’ll score all types of goals. Man United love an individual who can score goals.”

Ibrahimovic was brought to United in 2016 by Jose Mourinho and won the Europa League trophy and League Cup in his debut season.

It was confirmed this week that Sergio Ramos will leave Real Madrid after 16 trophy-laden years at the Bernabeu – and it’s a decision that will no doubt peak the interest of some of Europe’s elite.

So far, Manchester City, Liverpool and Paris Saint-Germain have already been linked with a move for the influential centre-back in recent months, with Chelsea, Sevilla and Inter Miami also rumoured to be interested in his signature.

Manchester United are another huge name who continue to be involved in speculation surrounding Ramos’ future, but it appears the Premier League side will not be in the running to offer the 35-year-old defender a deal.

The Daily Mail report that United’s hierarchy, including executive vice-chairman Ed Woodward, are still unhappy with both Ramos and his brother Rene because of how they ‘conducted themselves’ during previous transfer talks.

Ramos almost joined the ranks at Old Trafford but eventually turned it down to remain at Los Blancos. In fact, he spoke about that offer in a 2015 interview with COPE.

“There was an offer from United,” he said. “I considered changing for a while but Real Madrid was always my priority and there were no economic reasons.

“Did I feel cheated [by Madrid]? No, but I did feel disappointed for a while. There were some troubles that came to an end.

“Flattery from big clubs is always good as this is because you are doing well, but the fans and my club want me.”

Despite being against a move for the Spaniard, Ole Gunnar Solskjaer is keen on bringing in a centre-back in the summer window, with Ramos’ former teammate Raphael Varane a target.

Earlier this month, it was reported that United are willing to hand out a potential £10.3m annual salary to land the Frenchman this summer.

The 28-year-old currently earns a reported £4.3m-a-year wages at Madrid, although Defensa Central claim that Los Blancos could increase it to £7.7m-a-year.

Who should United target in the summer transfer window?

Let us know in the comments.

Behold the rise and rise of the UAE