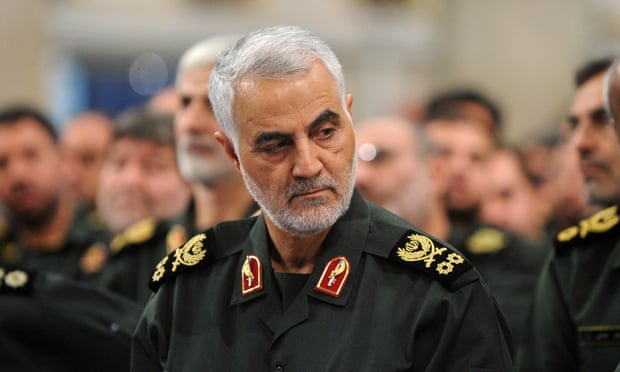 US orders 3,000 troops to the region as tensions rise following killing of powerful general Qassem Suleimani

The Middle East is starting the decade under the shadow of a major new conflict, as Iran vows to take revenge for the US drone strike that killed its most powerful general, Qassem Suleimani.

The Pentagon ordered 3,000 reinforcements to the region, diplomats were reportedly told to pack their bags in case of sudden evacuation, and the US secretary of state, Mike Pompeo, called his counterparts around the world to try to persuade them the US was “committed to de-escalation”.

In Syria and Iraq there was some rejoicing at the death of a ruthless military commander implicated in tens of thousands of civilian deaths, but the general reaction in world capitals was apprehension over what would come next.

“This is a moment in which leaders must exercise maximum restraint,” the UN secretary general, António Guterres, said. “The world cannot afford another war in the Gulf.”

The Iranian supreme leader, Ali Khamenei, ordered three days of mourning and declared that the US would face “severe revenge” for the killing of Suleimani, who ran Tehran’s military operations in Iraq and Syria.

The incoming commander of the Quds Force, Esmail Ghaani, was quoted on al-Jazeera as saying: “We tell everyone, be patient and see the dead bodies of Americans all over the Middle East.”

The 62-year-old general died when his car was targeted by a drone in the Iraqi capital, Baghdad, as local allies from the Popular Mobilisation Forces (PMF) were driving him from the airport. The de facto leader of the PMF, Abu Mahdi al-Muhandis, a close Suleimani associate, was also killed in the attack.

The former US general David Petraeus, who fought a battle of wits with Suleimani when he was US force commander in Iraq, said he was “in my view, the second most important person in Iran and the most important Iranian regionally.”

“The question that looms now, of course, is how do Iranian forces and their proxies throughout the region and beyond respond to this attack,” Petraeus told the Guardian.

Donald Trump, who ordered the assassination from his Florida resort at Mar-a-Lago, further goaded Tehran from his Twitter account on Friday, declaring that Suleimani “should have been taken out many years ago!” and “Iran never won a war, but never lost a negotiation!” before resuming his attacks on domestic opponents over impeachment.

The US justification for the attack appeared to evolve overnight. The initial Pentagon statement said it was aimed at “deterring future Iranian attack plans”, but Pompeo later suggested that an actual attack plan by Iran had been in motion and had been foiled by the assassination.

“He was actively plotting in the region to take actions – a big action, as he described it – that would have put dozens if not hundreds of American lives at risk,” the US secretary of state told CNN. “We know it was imminent. This was an intelligence-based assessment that drove our decision-making process.”

Agnes Callamard, the UN special rapporteur on extra-judicial executions, said on Twitter that as a legal justification for the attack in which 10 people were killed, the Pentagon’s claims were “very vague”.

“Future is not the same as imminent which is the time-based test required under international law,” she said.

Iran’s president, Hassan Rouhani, said Suleimani’s “martyrdom” would make the country more determined to resist America. “With no doubt, Iran and other freedom-seeking countries in the region will take his revenge,” he said.

Tehran’s Lebanon-based ally Hezbollah also promised to avenge the killing. In Iraq, Hadi al-Ameri, an Iran ally and head of the paramilitary Badr Organisation, called on all Iraqi factions to expel foreign troops.

In parts of a nervous region, where Suelimani’s reach had stretched as far as Gaza and Yemen, there were calls for vengeance. Street protests raged in Beirut’s southern suburb of Dahiyeh, a stronghold of Hezbollah. In northern Syria, however, where Iran’s role in crushing the anti-Assad opposition had been led by Suleimani, there was a celebratory mood, and sweets were handed out in some towns.

“This general was the devil himself,” said Sobhih Mustafa, in the town of Maarat Numan. He was worse than Sharon. His legacy will be written in blood.”

No Iranian official detailed what type of retaliation was being planned or for when. Washington and its regional allies Israel and Saudi Arabia, who also see Tehran as an arch-foe, all braced for potential reprisals.

Suleimani was commander of the Quds force, the elite, external wing of Iran’s Revolutionary Guards, which the Trump administration designated a terrorist organisation in April last year. A Pentagon statement accused the Quds force of being responsible for the deaths of hundreds of US service members and the wounding of thousands more.

Many considered Suleimani to be the second most powerful person in Iran, behind Khamenei, and arguably ahead of Rouhani. Through a mix of security operations and diplomatic coercion, he has been more responsible than anyone else for projecting Iran’s influence in the region. This has been led in Iraq, but also by establishing a seemingly permanent military foothold in war-torn Syria, linking Iran to the Mediterranean and a land border with Israel.

Suleimani’s assassination had followed a tit-for-tat series of strikes by the US and Iran, protagonists in Iraq since late 2006. The general had been central to almost all that Iran did and senior officials under Barack Obama considered him close to untouchable.

The drone strike came at a time when Iraq was already on the brink of an all-out proxy war, and hours after a two-day siege of the US embassy in Baghdad by a mob of PMF militants and their supporters. The Pentagon accused Suleimani of having masterminded the mob attack.

That siege followed US airstrikes on camps run by a PMF-affiliated militia particularly closely aligned with Tehran, which in turn was a reprisal for that militia’s killing of a US contractor in an attack on an Iraqi army base on Friday.

The US has deployed 750 airborne troops to Kuwait as a rapid reaction force available for use in Iraq.

Suleimani’s death leaves Iraq and the region on the brink of a new upsurge in violence, with Trump’s and Khamenei’s moves and counter-moves hard to predict.

Trump authorised the strike at a time when the US Congress was in recess, and the White House framed the action as an act of self-defence in the context of counter-terrorism operations. But Democrats and perhaps some Republicans in Congress will see it as an usurpation of the legislature’s authority to decide matters of war and peace.

“One reason we don’t generally assassinate foreign political officials is the belief that such action will get more, not less, Americans killed,” the Democratic senator Chris Murphy said on Twitter. “That should be our real, pressing and grave worry tonight.”