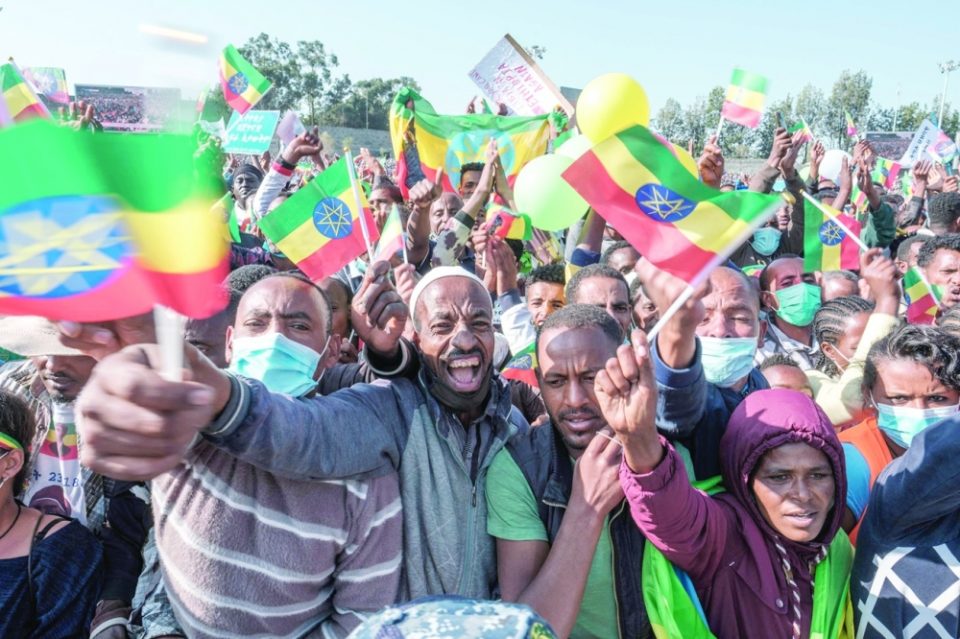 Civilians attend a pro-government rally to denounce what the organisers say is the Tigray People’s Liberation Front (TPLF) and the Western countries’ interference in internal affairs of the country, at Meskel Square in Addis Ababa, Ethiopia, November 7, 2021.

Some demonstrators denounced the United States as a year-long war that has killed thousands of people intensified amid rebel advances last weekend.

Tens of thousands of Ethiopians rallied in Addis Ababa on Sunday in support of Prime Minister Abiy Ahmed’s government as federal troops fight rebellious forces who are threatening to march on the city.
Some demonstrators denounced the United States, which is among the foreign powers that have called for a ceasefire as a year-long war that has killed thousands of people intensified amid rebel advances last weekend.
The UN Security Council, the African Union, and Kenya and Uganda have also called in recent days for a ceasefire.
Abiy’s government has pledged to keep fighting. On Friday, the government said it had a responsibility to secure the country, and urged foreign powers to stand with Ethiopia’s democracy.
Some of those gathered in Meskel Square in central Addis Ababa draped themselves in the national flag. Many singled out the United States for criticism.

US President Joe Biden’s administration on Tuesday accused Ethiopia of “gross violations” of human rights and said it planned to remove the country from the African Growth and Opportunity Act (AGOA) trade agreement.
“Shame on you USA,” read one demonstrator’s placard, while another said the United States should stop “sucking Ethiopia’s blood.”
Other demonstrators expressed anger at the US call for the government and the Tigray People’s Liberation Front (TPLF) to begin talks.
The conflict in the north of the country started a year ago when forces loyal to the TPLF seized military bases in the Tigray region. In response, Abiy sent troops, who initially drove the TPLF out of the regional capital, Mekelle, but have faced a sharp reversal since June this year.
“Why does the US government not negotiate with terrorists like al Shabaab?” said 37-year-old Tigist Lemma, referring to an al-Qaeda linked militant group in Somalia.
“They want to destroy our country like they did to Afghanistan. They will never succeed, we are Ethiopians.”
Speaking at the rally, Addis Ababa Mayor Adanech Abiebe invoked Ethiopia’s history of resisting colonial power to justify the war.
The conflict has killed thousands of people, forced more than 2 million from their homes and left 400,000 people in Tigray facing famine.
UN aid chief Martin Griffiths traveled to Mekelle on Sunday and met women affected by the fighting and humanitarian partners, the UN’s Office for the Coordination of Humanitarian Affairs said.
“(He) engaged with de facto authorities on the need for humanitarian access and protection of civilians through all areas under their control, and respect for humanitarian principles,” OCHA said.
A humanitarian source in Ethiopia and one person familiar with the matter told Reuters that the AU’s special envoy to the Horn of Africa, Olusegun Obasanjo, was also on the trip.
AU spokesperson Ebba Kalondo did not respond to a request for comment. TPLF spokesperson Getachew Reda told Reuters that both Griffiths and Obasanjo visited Mekelle.
Government spokesperson Legesse Tulu did not respond to a request for comment on the officials’ visit.

‘NO YOUTH’ TO FRONT LINES

During the Addis Ababa rally, there was one call for restraint, from popular musician Tariku Gankisi, whose songs call for unity of all Ethiopians.
“Let no youth go to the front lines to fight, let the elders go holding the fresh grass and ask for reconciliation,” Tariku told the crowd, before his microphone was switched off, it was unclear by whom. Fresh grass is a symbol of peace in the country.
Under a state of emergency declared on Tuesday, the government can order citizens of military age to undergo training and accept military duties.
Reuters has not been able to confirm independently the extent of the TPLF advance. The TPLF and their allies told Reuters last week they were 325 km (200 miles) from the capital. The government accuses the group of exaggerating its gains.
The government has also complained about foreign media coverage of the conflict and some people at the rally held signs denouncing “fake news” in Ethiopia.
Billene Seyoum, Abiy’s spokesperson, said in a Twitter post late on Saturday: “Orchestrated media propaganda against Ethiopia is escalating … Despite it all Ethiopia will overcome!”
Via Jerusalem Post
previous post

Refugees in Tripoli are resisting to inhumane treatment: “We deserve to live”

Ethiopian PM to Bennett: You let war criminals into Israel