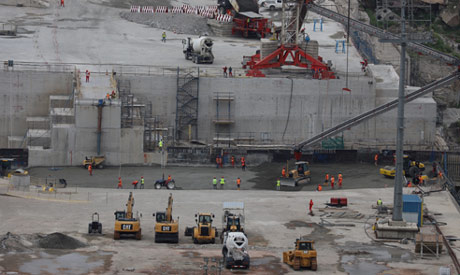 The Egyptian technical delegation headed by Minister of Water Resources and Irrigation Mohamed Abdel-Ati has arrived this morning in the Ethiopian capital Addis Ababa to attend the last of the four technical meetings in the negotiations on operating and filling the Grand Ethiopian Renaissance Dam (GERD).The meeting will be held on 8 and 9 January and will be attended by the irrigation ministers of the three countries along with representatives of the United States and the World Bank as observers.

This meeting is the fourth and final round of talks in the GERD negotiations as part of the roadmap agreed upon during a US-brokered meeting in Washington last November to break the deadlock in the negotiations.

The Washington meeting had set 15 January as the targeted deadline for resolving the dispute.

In this upcoming meeting, the three countries are expected to complete the technical negotiations on filling and operating the GERD.

The foreign ministers of Egypt, Ethiopia, and Sudan should meet on 13 January in Washington in the presence officials from the US Treasury and the World Bank to try to finalise an agreement to resolve the dispute.

The first meeting of the US-sponsored talks was held in Addis Ababa in mid-November 2019, the second was in Cairo in early December 2019, and the third was in Khartoum in late December 2019.

According to the “Declaration of Principles” signed by Egypt, Sudan and Ethiopia in 2015, if the three countries failed in resolving the dispute through negotiations, they can ask for mediation or refer the matter to their heads of states or prime ministers.

Egyptian Water and Irrigation Ministry spokesperson told Ahram Online last December that Egypt is holding to its demands regarding the regulations for filling and operating the GERD, dismissing news reports that Egypt had agreed to the release of 35 billion cubic meters of water.

Ethiopia started constructing the GERD in 2011 on the Blue Nile in the northern Ethiopia highlands, from where most of the Nile’s waters flow.

Egypt fears that the speed of filling the Ethiopian dam will diminish its share of the River Nile water.

Ethiopia aims to become the continent’s biggest power exporter by generating more than 6,000 megawatts through the dam.