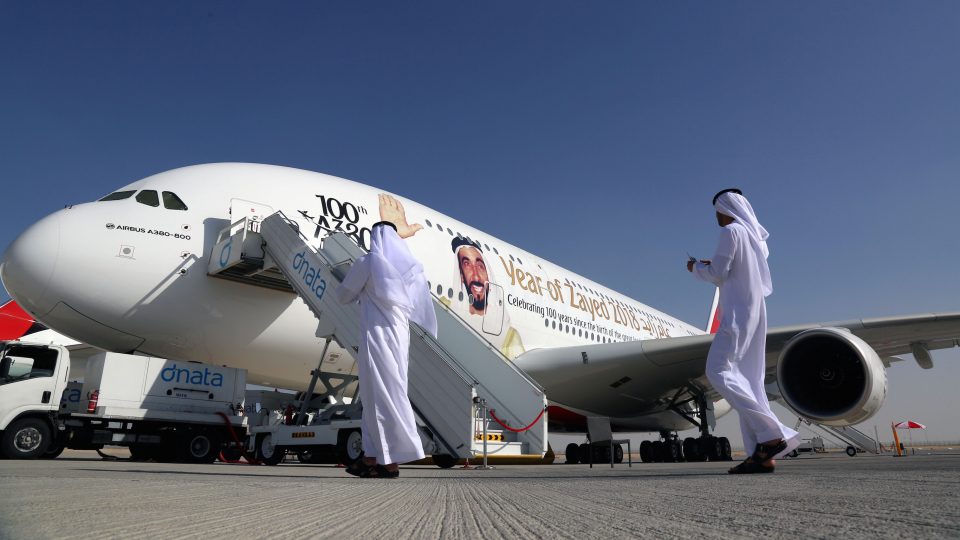 As the curtain rises on Dubai Airshow 2019, which starts Nov. 17 at Al Maktoum International Airport (DWC), the certainties of the decadelong aviation boom in the Gulf do not hold as true as they used to.

Emirates airline is not as profitable as it once was, despite a marked uptick in the first half of 2019-20, while Etihad Airways, the United Arab Emirates’ other major carrier, based in Abu Dhabi, is trying to recover from three straight years of losses in excess of $1 billion. Qatar Airways is frozen out in the region by a boycott that shows no signs of being lifted, something that has marred its own profits in recent years.

Emirates airline saw profits fall 69% to $237 million in the financial year to March 31, though it said first-half income grew this year by 282%. In September, Qatar Airways announced a full-year loss of $639 million, due to the loss of mature routes, higher fuel costs and foreign exchange fluctuations.

Scheduled passenger activity at DWC, designed to take the pressure off a full-to-bursting Dubai International Airport (DXB) — the world’s largest, for international passengers, at 89.1 million, in 2018 — has slowed to a trickle, with total numbers of flights into and out of the airport rarely exceeding 10 movements a day in recent months, although the facility did come in handy during the runway refurbishment that took place on one of DXB’s runways for 45 days in April and May.

Despite the fact that DWC officials in 2013 were looking forward to the construction of five, or even six, runways at DWC in the coming decade, a Dubai Airports fact sheet makes no mention of additional landing strips, and the mooted full transfer of Emirates passenger operations to DWC, postponed late last year from 2025 to 2030, has taken some of the gloss off the facility.

Sources told Al-Monitor that the announcement this year of suspension of the work to expand the DWC’s Aviation District, now known as the Mohammed bin Rashid Aerospace Hub, thought to involve additional runways and a midfield terminal, was intended to allocate more manpower to the work to prepare the World Expo 2020 site, which forms a small part of the DWC masterplan. Indeed, the Expo is seen as the only rallying point for Dubai’s flagging business community, as real estate prices tank.

What has prospered at DWC are business aviation and cargo. Emirates SkyCargo transferred dedicated freighter operations to DWC in 2014, and the build-out of the logistics zone at DWC has been slow but inexorable. On the business aviation side, five fixed-base operators are now in place, enabling speedy VIP passenger processing through luxurious customs and immigration areas.

Orders are the yardstick by which airshows are judged, and in the past two decades, Dubai has made its mark on the global industry, with total cumulative orders just shy of $640 billion. Banner years were 2017, which saw $114 billion of deals; 2013, with $206 billion; and 2007, with $156 billion.

In what would have been a bumper result for rival regional event, the Bahrain Airshow, which next takes place in November 2020, Dubai Airshow 2015, in stark contrast, saw total orders of only $37.2 billion. With little “order buzz” in the air, it appears that 2019 could be a similarly flat year.

Despite the gloomy regional aviation backdrop, and a stagnant order book — Sharjah’s Air Arabia is the only big player likely to sign for new aircraft in the next 12 months, for 100 either Boeing 737 Max aircraft or the Airbus A320 ​family — Dubai Airshow is expected to see record numbers of exhibitors, attendees and static aircraft. Visitor numbers should reach 87,000, exhibitors 1,300, and around 165 aircraft on static display. The show is today seen as a must-attend global aviation networking event.

“I think what makes Dubai Airshow successful is the business behind it,” said Khalifa al-Zaffin, executive director of the Dubai Aviation City Corporation, the government landlord overseeing development at DWC. “It is a true business case. And there are a lot of transactions happening. That’s why exhibitors come all the time. And their success really comes from there. It’s easy to do business.”

Ever since he stunned the world at the Paris Airshow in 2003, with the largest order for aircraft at $19 billion, when his airline was only 18 years old, Dubai ruler Sheikh Mohammed bin Rashid Al Maktoum has been the driving force behind the UAE’s aviation progress, ably assisted by his uncle, Emirates CEO Sheikh Ahmed bin Saeed Al Maktoum.

As the industry veers toward long-range twin-engine wide-bodies, both men’s original decision to back the Airbus A380 superjumbo is increasingly under the microscope, as the Boeing 787 Dreamliner and the A350 family come into their own. It was at the 2017 Dubai Airshow that the A380’s fate was sealed, when Sheikh Ahmed refused to order more of the aircraft in a dispute with Rolls-Royce over engine costs and parameters. Emirates has said that it will stick by the A380 for at least another 15 years.

Whether this will make sense in a newly upbound oil price environment remains to be seen — Emirates attributed its successful half this year to falling oil prices — but it is clear that the UAE will remain a force to be reckoned with. Etihad’s new CEO, Tony Douglas, appointed in late 2017, is mounting a ferocious campaign to bring the airline back to profitability, and should see progress in the next 12-24 months.

Aviation aficionados can enjoy the best the world has to offer in flying displays, static aircraft on view and the world’s leading aviation executives all in the same place at DWC next week. Dubai Airshow takes place at the Aviation Exhibition Center, DWC, Nov. 17-21.