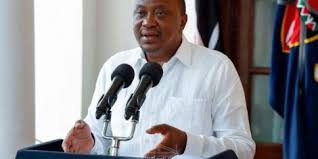 When President Uhuru Kenyatta addressed the nation from the State House in Mombasa his deputy William Ruto was nowhere in sight.

Dressed in a white shirt, with two flags behind him beaming colours, the President read his speech in a punchy tone finishing it with the response to questions from the press. He moved from line to line amidst silence and in the end, the President’s Strategic Communication Unit head Kanze Dena could be heard directing journalists to shoot their questions. For a man who rarely has time to respond to questions from the members of the press, perhaps due to tight schedule; today he was ready to break the norm. President Uhuru tackled enough if not all questions.

It was an address that looked ‘low-key’ but had lots of signals and tell-tale signs. Deputy President William Ruto was missing during the address. And, contrary to their first term camaraderie where the President and his Deputy would dress in matching attire, throw smiles and answer the questions from the press jointly; this one was different. It probably conveyed the message of a president determined to finish the journey with or without his helper.

Before publishing the story, our calls and text messages to the DP’s Communications Secretary David Mugonyi went unanswered. This is happening as the chasm between the president and his deputy widens.

It is instructive the President would drop Mwangi Kiunjuri, a key ally Ruto ally, from the cabinet in a mini reshuffle. When asked about the sacking of Mr Kiunjuri, who has been replaced by ex-Meru Governor Peter Munya, Uhuru smiled and gave a brief response.

“The ones I haven’t mentioned …. they are either in [another] place and if they are not in place then so be it. Kenya moves on,” he stated. In a press conference in the afternoon, Kiunjuri said that his sacking was not a surprise but stated that “I am not going” anywhere, implying he will still be active in the political scene. Another issue that appears to be driving a wedge between the President and his deputy is the Building Bridges Initiative which the president took time to address.

He lashed at the critics of BBI (read Dr Ruto) who maintain that the move is aimed at creating political positions for individuals. “The BBI is not about creating positions. We are talking about how we are going to deal with corruption, youth unemployment, and equity so that after every election we do not have to fight each other,” said Uhuru. “I find it very unfortunate in the process of unifying Kenya, people feel they are being left out.” On the other hand, Deputy President on Monday scoffed at the BBI summit which was held in Kisii County last week. He accused the ODM party of using the BBI to execute selfish political plans.

The DP tweeted: “We accept that BBI/handshake has been hijacked to craft ODM’s 2022 political line up. Unity/inclusivity presence and associated squander of public resources should stop.” The DP blamed Jubilee’s woes on what he termed as infiltration of the NASA Coalition ideologies.   The crack The political tirade fired by opposing political cronies of President Uhuru and DP Ruto reveals a lot about the strained relationship in the presidency. During the BBI summit in Kisii, Siaya Governor Colonel Rasanga, a  Raila ally, hinted that he would vie for the position of a regional governor, a third regional tire position claimed was proposed by the BBI.

In response to this, Nakuru Senator Susan Kihika, who is DP Ruto’s ally said BBI was never about unity of the people but creating positions, echoing Ruto’s oft-stated position. “Now that the cat is out of the bag, let us drop the charade about building bridges to nowhere; BBI was never about uniting Kenyans but about creating positions for perennial losers & reluctant retirees. These political conmen really thing we are fools,” she tweeted. On Monday, a group of ODM MPs and some Jubilee legislators led by Suna East MP Junet Mohamed and Jubilee Nominated MP Maina Kamanda asked the DP to resign if he was tired of being in the government. This elicited a rather quick and harsh reaction from the Elgeyo Marakwet Senator Kipchumba Murkomen. He tweeted back: “Get it from us if u serve in this Government or you are a Jubilee leader and you are tired with DP Ruto go resign join the government you want. Nobody is going anywhere away from UhuRuto. You must respect the Presidency as a whole. Period!” Over the weekend, the DP launched a scathing attack at the state agencies after Gatundu South MP Moses Kuria was detained at Kilimani Police Station on Friday despite having been released by a court. Speaking at Friends Musembe Secondary School in Bungoma County, Ruto criticised Kuria’s detention saying the era of “orders from above” to detain suspects was long buried with the new constitution. At the time, his allies asked Interior CS Dr Fred Matiang’i and PS Dr Karanja Kibicho to come clear on who gave the directive which led to the disobedience of the court orders in Kuria’s case and Miguna Miguna saga.