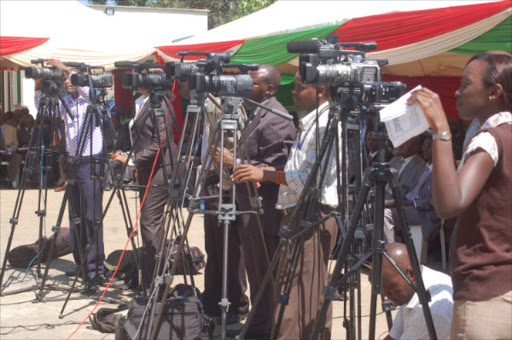 Because they are reliant on Western news agencies, African media coverage of Europe and America tends to mirror that of Western media

• In the West, the story of Covid-19 deaths is being told largely through infographics and statistics rather than images. The tragedies are portrayed in numbers, not photographs.

• But if the epicentre of the pandemic were to shift to Africa, western coverage would become more graphic, less sensitive. Let’s ensure that doesn’t happen here.

Let’s try a little thought experiment. Imagine, if you will, that instead of Europe and the US, the epicentre of the coronavirus pandemic was sweeping across Africa and killing many tens of thousands.

What images and storylines would be used to tell the story on TV screens and newspaper front pages in the West? Would they differ from those being employed by editors to explain the tragedy the virus is cutting across the global north?

In the West, the story of Covid-19 deaths is being told largely through infographics and statistics rather than images. The tragedies are portrayed in numbers, not photographs. But if the epicentre of the pandemic were to shift to Africa, this would be unlikely to continue. Western media’s coverage of the 2014 Ebola epidemic that affected six African countries was much less restrained, despite the fact that it killed far fewer people than Covid-19.

“Images of dead bodies in the streets and medical workers in hazmat suits” was staple fare. Daniel Berehulak, an Australian photojournalist working for The New York Times, was awarded the 2015 Pulitzer Prize for Feature Photography for his coverage of the epidemic, which “followed a burial team and documented a trail of the dead” and painted intimate portraits of other victims and survivors.

This year, though, the coverage is very different and it is unlikely that Columbia University will be handing out Pulitzers to photographers following body collection teams in Europe or America.

A study I did last year found that Kenyan media were more likely to publish gruesome images from events in far off lands and feature exoticised victims – that is those who are geographically, culturally and even racially remote from Kenyan audiences. As Sarah Sentilles notes, the media’s “practice of keeping some bodies protected from view while other bodies — be they victims of bombings or natural disasters or police violence — are visible everywhere” may reinforce racist and nationalist ideas that some deaths are more significant than others – “those visible dead do not belong to us.”

Because they are reliant on Western news agencies, African media coverage of Europe and America tends to mirror that of Western media, with few images of dead white bodies.

On the other hand, most Western coverage of Africa will rely on the output of a small army of foreign correspondents whose output, even with the best of intentions, tends to reflect back the Western gaze. Though many live on the continent, they still report on its communities as outsiders, not as members of them. This not entirely objectionable.

As the late media scholar Prof Roger Silverstein proposed, maintaining a “proper distance” is one of the tenets of respectful reporting — that is not too close that difference is erased. But it also should not be so far that one fails to recognise oneself in the other.

It is in the latter aspect that most foreign reporting fails. Sadly, as Kenyan author, Nanjala Nyabola, notes, “Few foreign outlets are interested in true partnership with African journalists” and this pretty much guarantees that their audiences will always get a distorted, exoticised picture of the continent.

However, it is also important to remember that many African media outlets are also dependent on the Western wire agencies to cover events outside their home countries. Few have bureaus or send reporters to other parts of the continent. Further, my study also found that local editors, when deciding which images are appropriate for publication, can be influenced by what is published by international outlets.

If Covid-19 deaths were to spike on the continent, it will be important to have African news organisations that are prepared to tell the story sensitively and responsibly. Now is the time for news outlets to develop practical measures, such as guidelines for their editors and cooperation with local reporters and photographers, to ensure that the coverage does not just mirror the Western gaze.

The article first appeared on The Star- Kenya