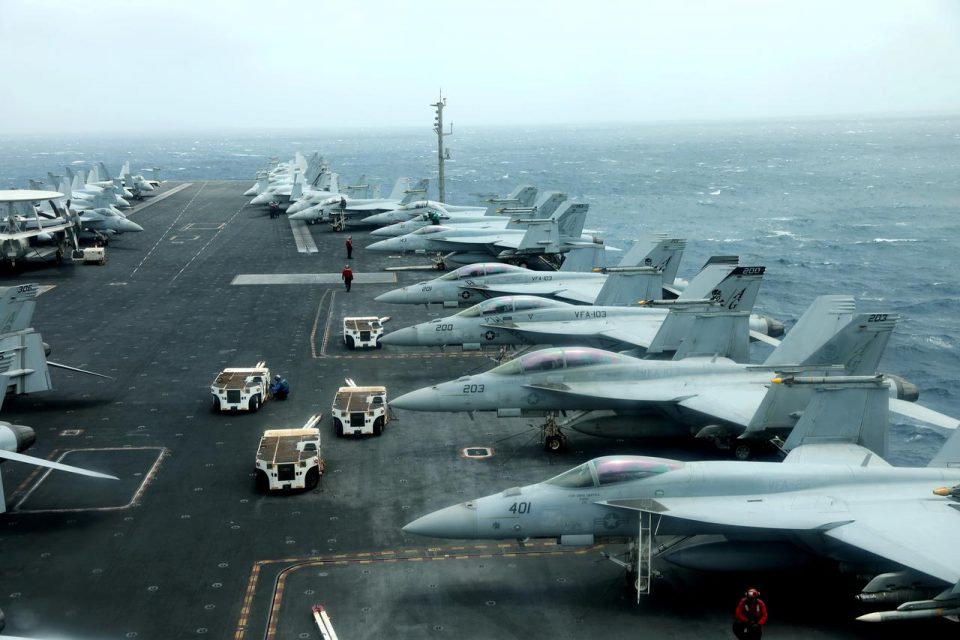 Satellite images have been released showing a US Navy aircraft carrier being escorted away by Iranian Revolutionary Guards Corp (IRGC) craft today, amid a year of heightened tensions in the Gulf waters.

The group of 20 small crafts reportedly surrounded and allegedly “harassed” the USS Abraham Lincoln, as well as the group of American ships it was leading including the guided-missile cruiser USS Leyte Gulf and the guided-missile destroyer USS Farragut, during their transit through the Strait of Hormuz.

The incident took place last week, though the satellite images were revealed and circulated yesterday.

According to today’s status of the marine tracker, the current location of the USS Abraham Lincoln is in the Indian Ocean just beyond the Gulf and Strait of Hormuz. The USS Harry Truman, another US aircraft carrier, will be replacing it and is currently in the Mediterranean on its way to the Gulf.

The Iranian interference in US naval activity comes roughly three weeks after the USS Abraham Lincoln entered the waters around the Strait of Hormuz, which made headlines due to the volatile situation between Iran and the US and its allies in the Gulf.

It comes after this year’s summer in which tensions in the Gulf have risen dramatically, particularly following Iran’s seizing of European ships and oil tankers in the summer and its shooting down of a US drone in the area.

More recently, Iran has been thought by many to be behind the attack on a Saudi Aramco oil facility in Saudi Arabia’s south-west in September, which hit global oil supplies by five per cent.

Much of the tension stems from the US withdrawal from the 2015 nuclear deal with Iran and the re-imposition of sanctions on the country, which has resulted in a spiral of increasingly tense relations between the Islamic Republic and the US and EU.

In response, the US has deployed a further 3,000 of its troops to be stationed in Saudi Arabia to monitor the perceived Iranian threat.

t month was seen as a reassurance of safety and stability to US allies in the Gulf and the trade which passes through the Strait of Hormuz. It was also part of the US 5th Fleet’s area of operations (AOO), which works to conduct naval operations and ensure security at certain strategic points in the region of the Middle East connecting the Mediterranean Sea and the Pacific Ocean through the western part of the Indian Ocean.

These three strategic choke points that the 5th Fleet stations its ships and aircraft carriers at consist of the Strait of Hormuz, the Suez Canal, and the Strait of Bab Al-Mandeb.