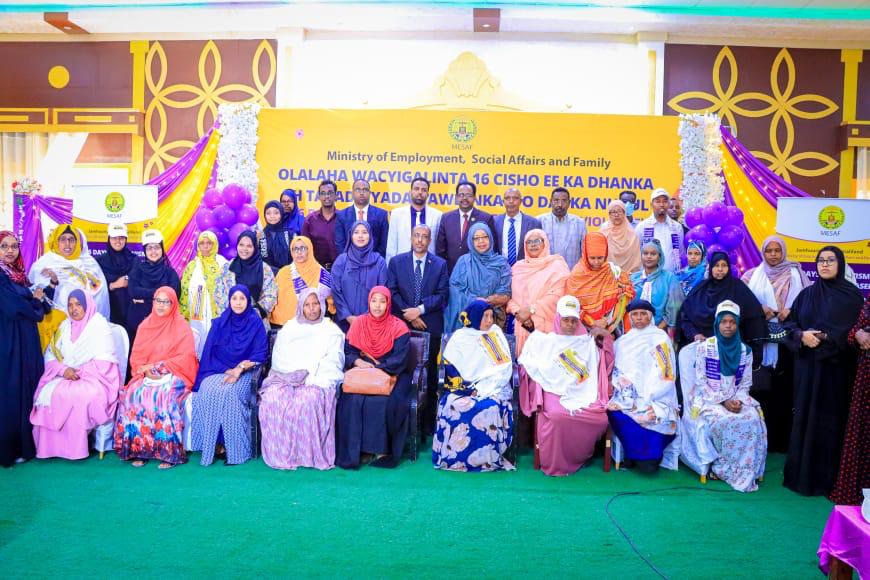 UN Women Somalia spearheaded the national 16-days of activism Unite! Campaign against gender-based violence under the theme “Unite to end violence against women and girls”, tasked by Gender theme group team, an inter-agency coordination group, to strengthen and galvanize gender mainstreaming in Somalia.

UN Women Somalia took part in several joint UN events like the team tree planting events during the launch of the 16-days days of activism to create awareness as a form of regeneration of life in the face of drought. They also took part in a Women’s dinner, Men’s dinner, commitment from champions and a large townhall event where UN Women Somalia supported daring small-scale businesses ran by women like restaurant and livelihood skills like tailoring business, where they exhibited men’s wear and female dresses and pastries.

UN Women Somalia through the Gender Theme Group supported the Ministries of Women and Human Rights in Somalia and Civil Society Organizations in activities to push back any form of social and economic injustices done against women and girls.

The main objectives of campaign were to raise awareness at the State level to end violence against women through the most effective and appropriate channels. The honorable Minister for Women in Hirshabelle, Rahmo Mohamed Gulle said “Gender based Violence cannot be eliminated without having state legislation that will deter perpetrators to continue to commit further violence against Women and children.” He added “Women in executive and big government positions to be more vocal in raising awareness against gender-based violence to enhance prevention measure in the grassroot levels where violence against women is at its peak and create channels that is geared towards socio economic reforms to curb predisposing factors and aim at immediate intervention.”

Violence against women and girls remains the most pervasive human rights violation around the world. Already heightened by the COVID-19 pandemic, its prevalence is now being further increased by the intersecting crises of climate change, global conflict, and economic instability. Against this setting, a backlash against women’s rights is underway around the world. Anti-feminist movements are on the rise, attacks against women human rights defenders and activists are up, and the legal status of women’s rights is increasingly imperiled in many countries. Regressive new laws are exacerbating impunity for perpetrators of domestic violence, governments are using force against femicide and gender-based violence protestors, and women’s rights organizations are being increasingly marginalized.

Museveni to EU: Invest instead of sending ‘young girls’ to lecture me on human rights