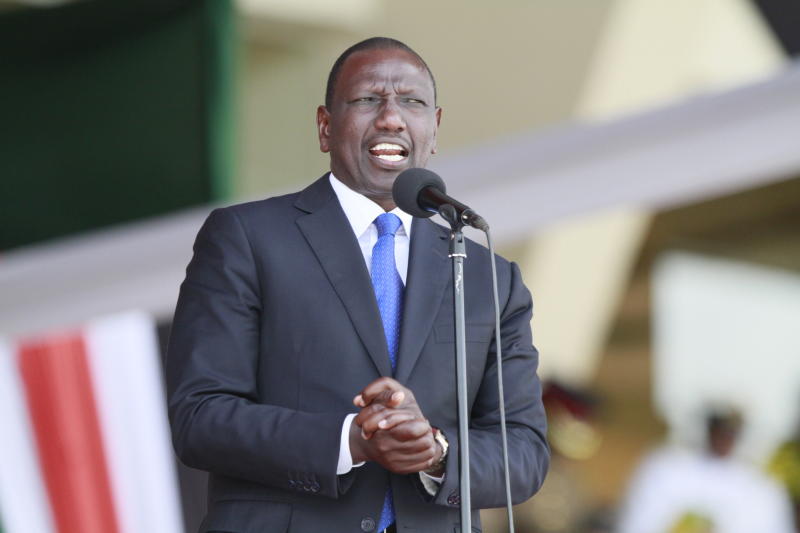 Deputy President William Ruto (pictured) has thrown President Uhuru Kenyatta’s succession into a spin with the stunning declaration that he is ready to stand down from the 2022 presidential race if his candidacy would spark chaos. The DP said he would not want any Kenyan to die because they were backing his political ambition to become the country’s fifth president. Dr Ruto made the statement at his Sugoi home in Uasin Gishu County last Thursday when he hosted some Kikuyu leaders drawn from the Rift Valley region.

He stressed his commitment to pursuing peace among communities to ensure the country never slides back into anarchy because of elections as it happened in December 2007. “I do not want Kenyans to fight because of me. That is how serious I am. I don’t want people to lose lives because of any politicians. Whether we get the seat or not, what I want the most is peace in this nation. I would rather step aside and not vie for any political seat than to have Kenyans kill each other over elections again,” he told the delegation. Political backing

The remarks come on the back of intense weekend rallies as Ruto and his allies seek political backing, especially in Central and Western Kenya, for his State House bid. Those opposed to his presidency have also sustained their onslaught against him in a scenario that has underscored him being a 2022 front runner.

The fierce campaigns from the Tangatanga team, which is allied to the DP, and the Kieleweke camp, which is opposed to his quest to succeed Mr Kenyatta, have raised the political stakes and turned the 2022 General Election into a do-or-die battle. Ruto told the delegation that it was on the basis of getting rid of hatred and ending election violence that he decided to run on a joint ticket with Uhuru in the 2013 and 2017 elections. The Rift Valley was one of the regions worst hit by the 2007-08 post-election violence that led to the death of more than 1,300 people and left thousands more injured. Communities backing opposing political formations butchered each other after the disputed results were announced on the night of December 30, 2007. The chaos following the re-election of President Mwai Kibaki, which was disputed by his main rival, Opposition chief Raila Odinga, saw Uhuru and Ruto among six Kenyans hauled before the International Criminal Court. The Kenyan cases later collapsed.

“We did not join forces with Uhuru Kenyatta to win elections. We joined forces to get rid of tribalism and hatred. Winning elections is just a bonus. No leader has not been chosen by God,” Ruto told the leaders last week. “We will make sure Kenya moves forward in the right way. I understand the president deeply and on a personal level because I know where we have come from.” Ruto and Uhuru are currently in a rocky relationship after the President decided to work with Raila after the 2017 presidential vote. Although Raila has not indicated he will run again for the top seat and Uhuru has not given any reason to show he is keen on extending his stay in office, there is a growing perception that the two leaders could be scheming to use the Building Bridges Initiative (BBI) to hand themselves power positions. And while hosting the about 4,000 Kikuyu leaders from the Rift Valley, Ruto hit out at the initiative, saying it is not inclusive.

The delegation was led by Bahati MP Kimani Ngunjiri, who is the chairman of the Kikuyu community living in Rift Valley, and his deputy vice chair Joseph Wainaina. Ruto said it is unacceptable for a few people to sit in a boardroom to decide the fate of all Kenyans.  Sources behind the planning of the meeting said that it was aimed at sending a message to Uhuru that Mt Kenya would back Ruto for the top job as per the agreement the two entered into in 2013 of backing each other to serve for 10 years each. “The deputy president assured us that we will be represented in his cabinet as Kikuyus in Rift Valley, and also asked for assurance that he has the full support of the Kikuyu community in Rift Valley come 2022,” said the source who attended the meeting. Mr Wainaina, who is also a prominent businessman in Eldoret, however, said that the meeting was meant to discuss peace between the Kikuyu and Kalenjin communities ahead of the next poll.

“The meeting was about peace. Our communities suffered a lot during the 2007 post-election violence and we do not want to see the same thing happening again,” said Wainaina. “We have had a Kikuyu president for so many years and we need to pass the mantle to another community, and that is why we are fully supporting the deputy president …. Come 2022, we will even support an alliance between Ruto and Raila just to make sure peace prevails.” Peace talks Uasin Gishu Woman Representative Gladys Boss Shollei said the meeting was about peace talks, and that is what the deputy president wants the most. “Communities in this area suffered a lot from the post-election violence and they have always held the position that they will never break the pact between Ruto and Uhuru.

This meeting was to stress the fact that peace is more important to them than any political seat,” she said.  Other leaders at the closed-door meeting that lasted about three hours included MPs Oscar Sudi (Kapseret), Ndindi Nyoro (Kiharu), Caleb Kositany (Soy), Liza Chelule (Nakuru County), Catherine Wambilianga (Bungoma), Charity Gathambi (Njoro) and Janet Sitienei (Turbo).  But the meeting that saw Ruto and other leaders dressed in traditional Kikuyu cultural attire drew condemnation from a group of Kikuyu elders who expressed their anger at Ruto for allegedly misusing their cultural attire. The elders led by Ndung’u wa Gaithuma said the attire should only be used on special occasions. “We are deeply shocked by the extent that some of our politicians have gone to sell their cultural beliefs based on politics,” Mr Gaithuma told a  press briefing in Naivasha this week.

Why don’t we treat all refugees like they were Ukrainian?