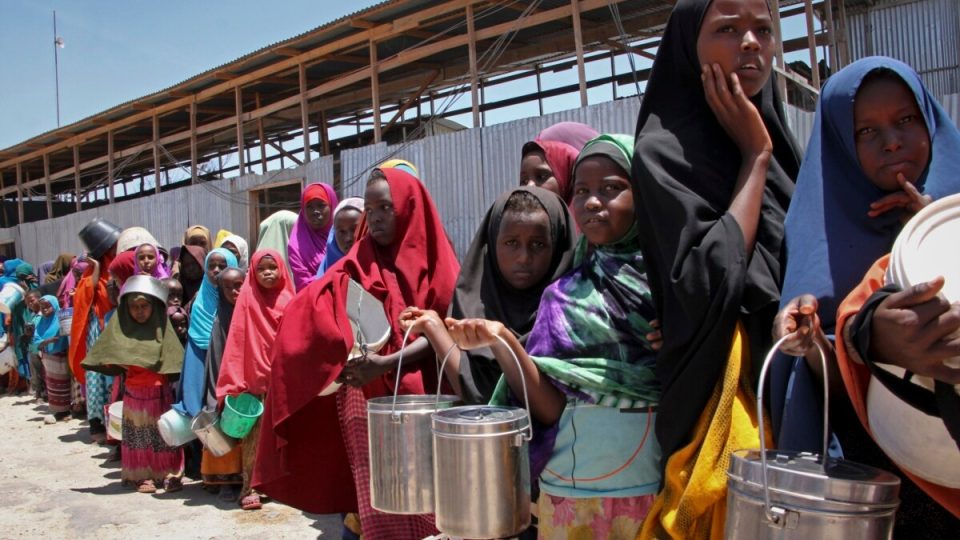 In Tracy McVeigh’s article in the UK’s Guardian newspaper in December, (“Fear of the F-word: Somalia avoids famine declaration as hunger spreads”) she stated that drought turns people into wanderers “with little option but to leave dead animals and dried-up gardens behind to go in search of food and water.” Until recently, and possibly still, the majority of Somalis were actually nomadic pastoralists, whose existence depended upon continually moving with their animals to those places which had received sufficient rain to grow pasture.

Predating the climate change crisis, this way of life was adapted to long-standing weather patterns in the Horn of Africa where rainfall is erratic in its local distribution while, in aggregate, relatively reliable across the region as a whole. Consequently, the essential algorithm for social and economic survival in the Somali territories was the regular long-distance movement of herds and herders with drinking water for humans (and young animals) supplied by male camels, hauled from reliable surface water sources, often, over enormous distances. That pastoral transhumance has been severely disrupted over the last half century is the underlying cause of animal deaths, the destitution of many Somalis and the increasing frequency of famine.

Nomadic pastoralism began to break down in the 1970’s due primarily to badly conceived ’development’ programmes which distributed thousands of miles of barbed wire to enclose the best rangeland within “group ranching” schemes. Disruption intensified with the inter-communal warfare that broke out as a consequence of denying customary access to former communal pasture and water resources redesignated as the private property of internationally supported commercial ranches. To this day, Somalia remains one of the world’s largest importers of barbed-wire.

Modern land-grabbing in the Horn of Africa, financed by Saudi and Gulf states, continues to deepen the crisis of pastoralism across the region. The result of these so-called development policies has been to exclude politically marginalised pastoral communities from vital livelihood resources. Herd depletion is followed by human sedentarisation in IDP camps where survival depends upon erratic “food for work” schemes overseen by the international aid system.

Of increasing importance is the growing ‘gig’ economy of internally displaced persons (IDPs) hired by the day on large commercial plantations at below subsistence wages. The “communities” to which MSF (Médecins Sans Frontières) and other aid agencies minister and whose desperate condition is reflected in the widely quoted high rates of malnutrition, are in effect trapped in a regime of modern slavery, created and reinforced by actually existing “development” and “relief aid”.

To be clear however, the Somali territories still ‘work’, so to speak. The Red Sea port of Berbera, nowadays managed by DP World (also active in several UK ports) has become Africa’s largest livestock exporter, mainly to Saudi Arabia and the Gulf States. Since 2010, Berbera has been shipping around 2 million sheep and goats per annum, irrespective of reported ‘droughts.’ Every year, Bosassa and Djibouti ports also handle hundreds of thousands of Somali livestock, and there are advanced plans for a new livestock export terminal in Lamu to handle the growing overland livestock exports to Kenya. The FAO estimated that Somalia exported 3.8 million live animals in 2015 and 2.4 million in 2020. In terms of live exports, the region now surpasses Australia. Surprising for a region defined by drought, poverty and conflict?

While annual livestock export numbers vary considerably, highly sophisticated supply chains, operating through a profitable telecom-industry has transformed livestock production in the Somali territories. An ecologically sustainable, communally managed subsistence pastoralism has been displaced by militarised extractive ranching which is dramatically acclerating Somalia’s ecological deterioration and rendering sustainable pastoral adaptation to climate change impossible. While this livestock bonanza lasts, trading hubs, such as Galkayo and Garowe near the Ogaden border, have been transformed from small oases into hi-tech boom towns with thriving hospitality, real-estate and abattoir businesses. Since al-Shabaab controls most of Somalia’s rangelands, it is clear that it is only with its consent that livestock production and export is possible. Being so integrated into the region’s most valuable sector, is this the reason for its apparent resilience?

However, McVeigh’s article presents an ahistorical narrative that speaks to the interests of the international aid system. Here, it is “drought” (incidentally, an equivocal claim given available rainfall data) together with hesitant government and donors, rather than decades of bad development and dysfunctional relief interventions that have caused impoverishment and hunger and which, might reasonably be held accountable for present day “loss and damage” sustained by Somalis, alongside the leading perpetrators of climate breakdown.

But the international aid system now has a stranglehold on outside journalist access to conflict zones. The decimation of independent ‘foreign correspondents’ has reinforced the influence of aid agencies in shaping the external narrative. Even the Guardian’s touted “independent ownership” is no guarantee that the newspaper is “entirely free from political or commercial influence”. Take its Global Development Section, which is co-financed by the Bill and Melinda Gates Foundation and, importantly, supports the Guardian’s reporting on the Somali territories. The Guardian’s website acknowledges this  when it states,, ‘The only restriction [our emphasis] to the Guardian’s coverage on this site is where the Bill & Melinda Gates Foundation is prohibited under US law from directly funding or earmarking funds to: (a) influence the outcome of any domestic or foreign election for public office; or (b) support lobbying or other attempts to influence legislation (local, state, federal, or foreign).’ Presumably, in the context of international reportage, this means the Guardian’s Global Development section will not publish material judged prejudicial to US interests.

It is our contention that the spectacular growth of urban populations in Saudi Arabia and the Gulf States can be nutritionally sustained most cost-effectively by land-grabbing and militarised ranching in the Horn of Africa, facilitated by temporary and qualified humanitarian assistance provided by the international aid system for those excluded by this modern form of enclosure and primitive accumulation.

Mark Duffield works on the political philosophy of permanent emergency, including, the datafication of the current global crisis, the expansion of remote management systems and the growing antagonism between ‘connectivity’ and ‘circulation’. Nicholas Stockton describes himself as a recovering aid worker, now in semi-retirement.

Why Putin Is Playing Poker, Not Chess