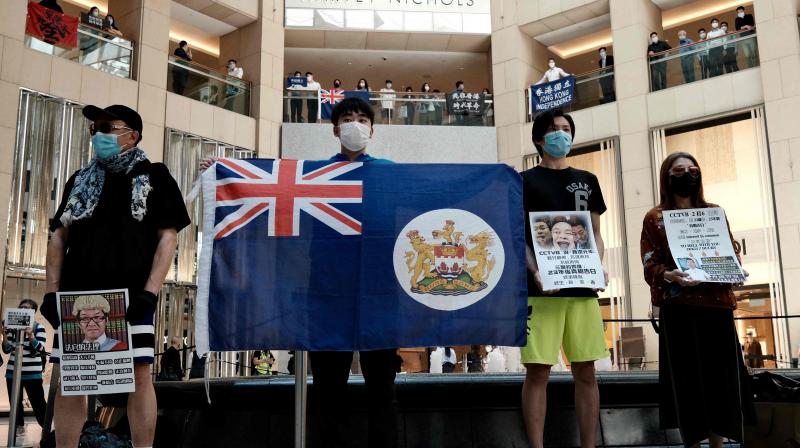 Hong Kong: Riot police hit Hong Kong’s streets on Friday ahead of planned rallies by pro-democracy protesters who were looking to defy restrictions on gatherings during the coronavirus pandemic to voice anger against authoritarian Chinese rule.

The semi-autonomous financial hub was upended by seven months of violent protests last year, hammering its reputation for stability and leaving the city deeply divided.

But small protests have bubbled up in the past week and activists are hoping to use May Day to muster numbers once more.

Pro-democracy unions and social media posts have called for people to gather and shout slogans in their neighbourhoods on Friday afternoon, despite a ban on more than four people gathering in public places that is aimed at halting the virus.

Police ramped up their presence across the city on Friday morning, searching primarily young passengers at subway stations and in neighbourhoods where anti-government sentiment runs high.

The South China Morning Post reported that 3,000 riot police had been placed on stand-by with rubber bullets and tear gas at the ready.

Some encrypted chat groups used by protesters fretted that protesting while anti-virus laws remain in place might lead to large numbers of arrests, raising questions over whether significant crowds would risk gathering.

The annual Labour Day often sees protests around the world but this year’s are expected to be tamer given the ongoing global health crisis.

Applications by unions to hold traditional marches in Hong Kong were rejected by authorities, but protesters are getting creative.

During brief rallies in malls earlier this week, activists encouraged each other to keep 1.5 metres apart and stick to small groups of four.

Riot police quickly intercepted the flashmobs, forcing them to disband as either unlawful assemblies or gatherings that breached the anti-virus measures.

Three months ago, Hong Kongers were panic buying masks and hunkering down in cramped apartments as one of the first places outside mainland China to be struck by the coronavirus.

But the fear has abated in recent weeks.

Health authorities have made impressive strides against the outbreak with just over 1,000 infections and four deaths.

For the last five days in a row, the city of seven million has reported no new cases and authorities plan to begin easing movement restrictions in the coming weeks.

But any relaxation would come at a time of renewed political tension — and as the anniversary of the start of last year’s huge protests approaches.

Anger towards Beijing has been inflamed by the recent arrest of prominent moderate activists on charges related to the protests and senior Chinese officials announcing a greater say in how Hong Kong is run.

But the movement soon snowballed into a popular revolt against Beijing’s rule and a call for greater freedoms.

Hong Kong’s government and Beijing have shied away from any reconciliation moves, holding fast against demands for an inquiry into police conduct, an amnesty for the 7,800 people arrested during protests and universal suffrage.

“But I am worried that we could not be able to stand the continuous political devastation and resurgent violence.”