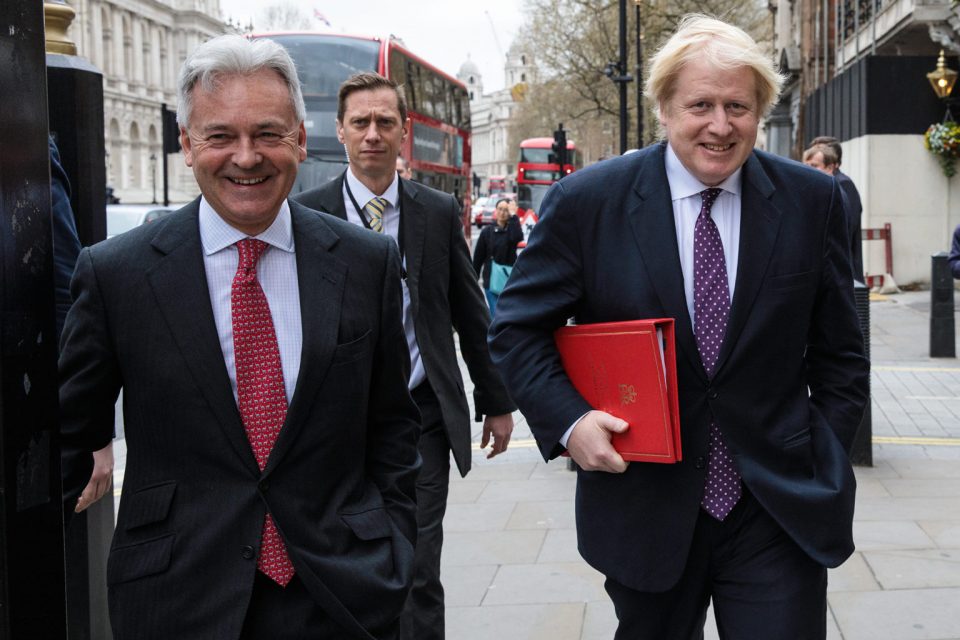 The recently published diaries of former foreign minister Sir Alan Duncan provide an unprecedented window into the influence the Israeli government and affiliated pro-Israel lobby groups have over the UK Foreign Office.

From revelations about Israeli efforts to “destroy” him, to attempts by a powerful pro-Israel lobby group to stop him becoming a minister for the Middle East, Sir Alan Duncan saw up close the power of the Israeli state in British politics during his time at the heart of the UK government.

Duncan served as British foreign minister from 2016-19, having previously held the international development brief. His new book, In The Thick Of It, reveals much about UK government policy that has been missed by the British press and broadcasters.

At the beginning of 2017, media outlet Al Jazeera contacted Duncan to inform him about its undercover investigation into Israeli influence in UK politics, which included revelations related to him personally.

Duncan wrote in his diary that Al Jazeera “has footage of diplomats from the Israeli embassy in London collaborating with MPs from both Labour and Conservatives on Israel”. He said this included Shai Masot, a diplomat from the Israeli embassy “calling for them to destroy the ‘Deputy Foreign Minister’ (i.e. me), so that he never becomes Foreign Secretary”.

Duncan added: “They say that if [then foreign secretary] Boris [Johnson] were to be sacked, I’d take over and so both such moments have to be stopped.”

Days later, Duncan went to the Foreign Office to brief Simon McDonald, who was then running the department, on the revelations.

Duncan wrote: “I teasingly remind him of what happened and what I said to him on my first day as minister. ‘Simon… didn’t I tell you? The CFI and the Israelis think they control the Foreign Office. And they do!’”

The CFI is Conservative Friends of Israel, a powerful Westminster lobby group that does not disclose its funders but has claimed 80% of Conservative MPs are members.

On the same day, Duncan spoke on the phone to Mark Regev, then Israel’s ambassador to Britain. According to Duncan, Regev told him Masot is a “local hire, works in a junior capacity and does not have diplomatic status”.

“It’s all total bollocks,” Duncan wrote. “Masot is a First or Second Secretary, a member of military intelligence, employed specifically as a parliamentary and undercover propagandist.”

He continued: “What on earth is the point of Regev stating something that is so blatantly untrue, and about which we both hold the facts? What a muppet.”

Duncan then briefed Boris Johnson who was “indignant”.

“‘They shouldn’t behave like this,’ [Johnson] exclaimed, though I’d told him a million times that they do.”

Duncan confided that he withheld some information from Johnson: “The Al Jazeera tapes essentially say that I run the [Foreign Office], BoJo is an idiot, I take the serious decisions, and if anything happens to Boris I will become Foreign Secretary and so I must be destroyed. It’s a poor reading of the facts – indeed, it’s balls – but it gives a useful insight into Israel’s mentality.”

In a conversation filmed outside a London pub, Michael Rubin, the parliamentary officer for Labour Friends of Israel (LFI), which counts dozens of Labour MPs as either “officers” or “supporters”, revealed the close links between the group and the Israeli embassy in London.

Rubin said that he and Shai Masot “work really closely together… but a lot of it is behind the scenes”. He added that “the [Israeli] embassy helps us quite a lot. When bad stories come out about Israel, the embassy sends us information so that we can counter it.”

Aware of these revelations, Duncan talked with Emily Thornberry, then shadow foreign secretary, to see if Labour intended to table an urgent question in parliament on the matter.

“They won’t because it would risk stirring up more anti-Semitism accusations against them,” Duncan reported, referring to the long-running “anti-Semitism crisis” that rocked the Labour Party under the leadership of Jeremy Corbyn.

The LFI faced no action from Labour in the aftermath of the Al Jazeera programme.

Before hard evidence emerged of Israeli efforts to “destroy” him, Duncan had already been targeted by the CFI to stop him being promoted within the British government.

On 16 July 2016, Duncan wrote: “All seems clear and agreed that I will be Minister for the Middle East, as expected. Permanent Under-Secretary Simon McDonald called to say it’s all been agreed and he would recommend it to the Foreign Secretary.”

He continued: “But when I see Boris [Johnson] at 6pm it seems a massive problem has arisen, which is nothing short of contemptible. Boris says the Conservative Friends of Israel are going ballistic.”

Johnson reported that Eric Pickles and Stuart Polak, both senior figures in the CFI, “have both called him incessantly saying I must not be appointed”.

Duncan wrote that the opposition from the CFI is “for no other reason than that I believe in the rights of the Palestinians”.

“Whereas they pretend to believe in two parallel states, it’s quite clear that they don’t, and so set out to destroy all genuine advocates for Palestine,” he added.

He concluded: “They just want to belittle and subjugate the Palestinians.”

The lobbying worked. Despite the appointment not being announced, “Now Number 10 are telling Boris I cannot have the Middle East”, Duncan wrote. He continued that Johnson was “somewhat indignant at this pressure and its propriety (or lack of it)”.

Duncan then offered a compromise: to take the Middle East minister job but to exclude the issue of Israel-Palestine from the brief. Johnson “likes the idea”, Duncan reported, but added that “on any level it is appalling that a [prime minister]’s appointments can be subject to such lobbying. Our own national interest is being taken for a sucker.”

He continued: “In any other country the conduct of Eric Pickles and Stuart Polak would in my view be seen as entrenched espionage that should prompt an inquiry into their conduct.”

He continued: “This whole issue of Israel is utterly out of proportion, but, worse, is permitted to empower interested parties in Number 10 to decide what a minister’s responsibilities should be. This is improper. It’s wrong. I actually think it’s corrupt, but the whole system buys into it without realising how wrong it is.”

The situation then escalated further as Duncan reported that the Board of Deputies of British Jews ran a webcast in which Labour MP Louise Ellman said that Duncan should not be foreign minister.

“My appointment isn’t even public yet. How did they know?” Duncan wrote. “Clearly Pickles and Polak have been actively lobbying against me, linking CFI, Labour Friends of Israel and the Board of Deputies.”

Duncan continued: “This is the most disgusting interference in our public life. I find it astonishing the system allows it to happen, all the more so as anything I have said has been wholly in tune with government policy. The difference seems to be that I believe in that policy, whereas CFI and the government itself do not!”

Duncan was then informed that his appointment to Middle East minister would be blocked. “This is so wrong on all levels,” he wrote, adding that Simon McDonald “is rather perturbed by what is going on”.

He added: “The only people who are acting improperly are CFI and those who accept their browbeating lobbying”.

In the end, Duncan was offered the role as Minister for Europe and the Americas, and served in that position for three years. However, he told McDonald that “he should never forget what it is the [Foreign Office] has submitted to”.

Duncan also casts light on another scandal involving the Israeli government and the CFI which broke in 2017. It emerged that Priti Patel, then minister for international development, held a number of “off radar” meetings with Israeli officials, including prime minister Benjamin Netanyahu, during a “family holiday” in the country.

Duncan notes that Patel spent a week in Israel “on a programme put together by Polak, without telling the [Foreign Office] or even her own department, attending meetings at the highest level, accompanied by the principal pro-Israel donor lobbying in the UK”, referring to Polak.

He concluded that “it is yet further evidence of the pernicious influence of Polak and the CFI, something that amounts to embedded outside influence at the heart of our politics”.

Patel eventually resigned but Duncan noted that nothing in the “exchange of letters even mentions Israel and the deep impropriety of her actions… and the CFI remains in place, unchallenged and only obliquely mentioned”.

Duncan concluded: “The Conservative Party and the PM remain in total denial, and once again brush it under the carpet. It reeks, it stinks, it festers, it moulders – all rotten to the core. The rules of propriety, and all the morality and principle that goes with it, are discarded and rewritten to accommodate this exceptional pro-Israel infiltration into the very centre of our public life.”

Duncan also believed other UK government policies were being dictated by the CFI. In February 2019, then home secretary Sajid Javid banned the political arm of Hezbollah, the Lebanese party and militant group.

Javid, Duncan notes, is “just sucking up to the CFI, who are out in force behind him reading out their scripted interventions”, adding, “Polak and Pickles are in the Peers’ Gallery gloating from above about having deployed their Commons troops in Israel’s cause.”

He added: “We are supposed to be Great Britain, but I fear we are too willing to let others pull our strings.”

Declassified recently outlined the deepening military relations between the UK and Israel and revealed that a third of cabinet ministers in Boris Johnson’s government have been funded by Israel or the CFI.

Last week, foreign secretary Dominic Raab travelled to Israel for a meeting with Benjamin Netanyahu. Netanyahu thanked Johnson for his “staunch, unwavering support” in the recent bombing of Gaza, to which Raab replied: “You can always count on us.”

Raab described himself as a “friend” and “great supporter” of Israel.

Presented with Duncan’s allegations of undue Israeli influence, the Foreign Office refused to provide an on-the-record comment. The Conservative Friends of Israel, Stuart Polak and Eric Pickles, did not respond to requests for comment. DM

Matt Kennard is head of Investigations at Declassified UK, an investigative journalism organisation that covers the UK’s role in the world.