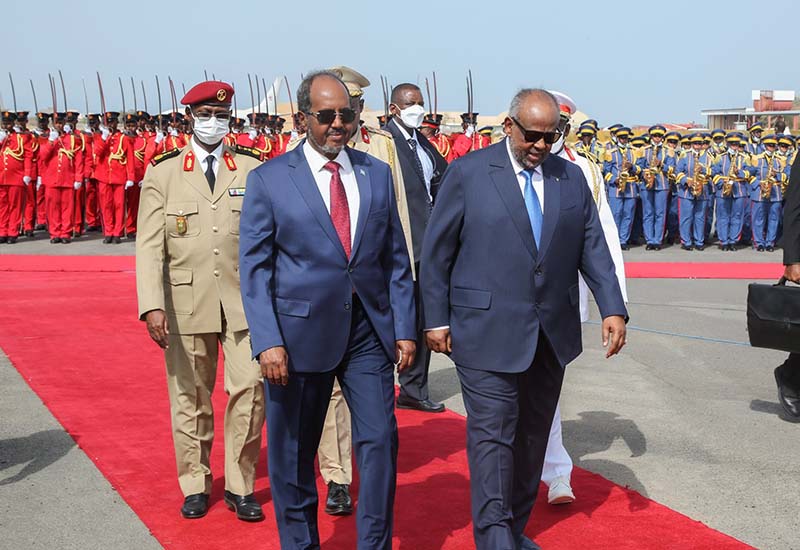 Intensive talks seeking to find common solutions to the files of Al-Shabaab, Somaliland and drought.

January 10, 2022
Convergence serves the interests of the two countries

After a period of coolness marred relations between the two countries, Somalia and Djibouti moved to discuss a number of security and environmental files, reflecting their desire to cooperate in order to face common challenges, foremost of which are the constant threats of Al-Shabaab, the Somaliland file, in addition to the drought that threatens the food security of the two African countries.

Mogadishu – Djiboutian President Omar Guelleh’s visit to Mogadishu on December 28 marked the first visit by a head of state to Somalia since the country’s last president, Hassan Sheikh Mohamud, was elected last May.

The visit is also an affirmation of ending the period of apathy between the two countries that marred the era of former Somali President Mohamed Farmajo.

My generation was among the first world leaders to congratulate Sheikh Mahmoud after winning the presidency of Somalia for the second time, but in a non-consecutive manner, as his first term was between 2012 and 2017.

Sheikh Mahmoud visited Djibouti twice since his re-election as president, the first in July of last year and the last on the eighth of last December.

The intensity of the mutual visits between the two presidents in less than six months reflects the desire of the two countries to strengthen bilateral relations to face common threats and challenges.

Although the most prominent title of my generation’s recent visit is the participation in the official opening of the headquarters of the “Regional Academy of the Somali Language” in Mogadishu, several common files of interest to the two neighbors were discussed during the visit.

The Somali and Djiboutian peoples belong to one ethnicity (Somali), and the two countries are members of the League of Arab States, and part of the Horn of Africa is located in a strategic area of ​​​​sea transport lines between Asia, Europe and Africa.

The security file and the challenges posed by the Al-Shabaab movement, in addition to the drought that strikes the Horn of Africa, and the Djiboutian mediation in the file of negotiations with the Somaliland region seeking to secede from the country, are the most prominent of these files of common interest.

Gelle’s visit to Mogadishu coincides with several victories achieved by the Somali army with international support and the participation of tribal militants in the fight against Al-Shabaab, and the liberation of several strategic cities and towns in the center of the country.

Djibouti had a prominent role in reshaping the Somali state in 2000 after its collapse as a result of the civil war that ravaged the country in 1991. Also, the northern neighbor of Somalia has contributed hundreds of soldiers to the African forces since 2011, which seeks to establish security in the country.

The visit came to confirm Djibouti’s continued support for the Somali government in its war against the Al-Shabaab movement, which controls large parts of the country’s southern regions.

Three days before Geli’s arrival in Mogadishu, the Somali president announced the liberation of the federal region of Harshbele, consisting of the Hiran and Middle Shabelle regions, completely from the control of Al-Shabaab.

The visit is a continuation of Sheikh Mahmoud’s recent visit to Djibouti, during which my generation did not hide his happiness at the “heavy losses” suffered by the youth movement, describing it as a “paper tiger.”

The recent visit of the President of Djibouti to Somalia is nothing but a message to the outside that the youth movement no longer represents an existential threat to the country as in the past, and that the capital, Mogadishu, has become safer than ever, especially after the liberation of the surrounding cities and towns.

The Somali president is aware of his country’s need for the support of its northern neighbor to mobilize international support in its war against the rebellious youth movement, and to liberate the territories and areas under its control.

On Monday, the Somali authorities announced the killing of 61 Al-Shabab militants in an air strike carried out by the Intelligence Service in the south of the country.

The Ministry of Information stated that “about 150 al-Shabaab members were present in the agricultural area that was subjected to the raid, and they were preparing to launch an attack on government military centers on the outskirts of the town of Hawally.”

Djibouti’s support for Somalia was not limited only to the war against Al-Shabaab, but also sought international efforts to revive negotiations between Mogadishu and the Somaliland region, which declared its unilateral separation in 1991.

The Somaliland government officially suspended the talks with Mogadishu earlier in 2022, which have been launched since 2012, and the last round of negotiations took place in Djibouti in 2020.

However, these long talks did not come out with a result, given the Somaliland government’s insistence on secession, while Mogadishu adheres to unity.

On the eighth of last December, the President of Djibouti simultaneously received the Somali President, Sheikh Mahmoud, and the President of the Somaliland region, Damusi Bihi Abdi, in a move to revive negotiations between the two parties again.

Sheikh Mahmoud met with the President of Somaliland, and the latter discussed with a Turkish-Norwegian delegation facilitating negotiations with Mogadishu.

And Geli’s quick visit to Mogadishu is likely to have included ways to pave the way for launching a new round of negotiations between the two parties, despite the difficult conditions set by the Somaliland government to officially start negotiations.

The government of Somaliland (Somaliland), according to a statement, requires that it enter negotiations “as a sovereign state that united with the Somali south in 1961 and separated from it in 1991.”

This condition means an official recognition by Mogadishu of the secession of Somaliland before entering negotiations, while Somalia opposes any secession of the region.

The drought afflicting the Horn of Africa, especially Somalia and Djibouti, makes it imperative for the presidents of the two countries to search for solutions to face its repercussions on food security, especially as the specter of famine looms over the region.

And the World Health Organization warned last August that the Greater Horn of Africa is experiencing one of the worst famines in the past seventy years.

This situation prompted large numbers of Somalis to flee their villages in search of food and water for themselves and their livestock, many of which died due to drought.

Indeed, last summer the World Food Program revealed that more than 7 million people in Somalia (about half of the population) are acutely food insecure, and 213,000 are already facing famine-like conditions.

The interdependence of the common files between Djibouti and Somalia requires the presidents of the two countries to have the highest degree of coordination to face these complex challenges and to mobilize the largest amount of international support to address them.

Odinga: President Ruto is a “puppet of the West”