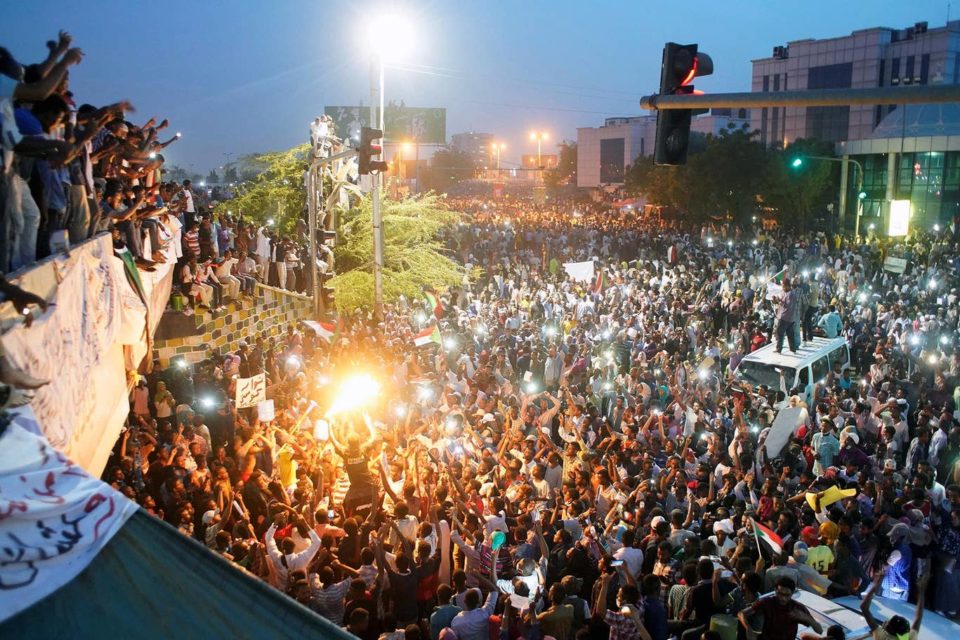 Making comparisons in the Middle East can be lazy trick.

But no matter how many times you blinked, the bloody spectre of Egypt kept flickering over the sudden rush of congratulations when protesters managed to topple Omar al-Bashir in April.

How could removing one man rip out the deeply entrenched and complex military and security infrastructure? And how could that security apparatus be reined in, given the intense meddling of regional powers like Saudi Arabia and the UAE, whose interests are so wrapped up in the country?

The echoes of Egypt sounded even louder last week when the transitional military council led by General Abdel Fattah al-Burhan, and its linked security bodies including the feared Rapid Support Forces (RSF), apparently ran out of patience.

Protesters would not leave their sit-ins until they succeeded in securing a majority civilian control of the proposed interim government.

The RSF, formed from the remnants of the feared Janjaweed, a paramilitary group accused by rights groups of committing war crimes in Darfur, opened fire on a protest camp in Khartoum.

Eyewitnesses described the RSF gunning down people, flogging others with whips, torching tents with people still inside them and throwing the evidence – the corpses – in the Nile.

Protesters, who were counting the dead and searching for their missing, said they had little hope.

“We are stuck in the middle of the proxy war,” said Reem Abbas, a local journalist.

“We don’t even know who our enemy is. It may be an entire region with interests here that we are fighting against,” she added.

The biggest concern, she said, was the impact of Saudi Arabia and the United Arab Emirates, who sent a $3bn (£2.35) aid package to prop up the military authorities as soon as Bashir was toppled.

The two Gulf states have ties with Burhan and his deputy, the head of the RSF Mohamed Hamdan Dagalo, known as “Hemitte”, due to Sudan’s participation in the ruinous Gulf-led war in Yemen.

At any point as many as 14,000 Sudanese militiamen, many from the Janjaweed, have been fighting for the Saudis and the Emirates against the Iran-backed Houthi rebels.

The Saudis and particularly the Emirates, who lost 45 men in a rebel missile attack on an arms depot in 2015, are loath to lose any more of their own soldiers and so have turned to allies and mercenaries.

Just four days after Bashir was toppled, in the middle of one of the country toughest crises, Sudan’s official news agency carried a statement from Hemitte promising Sudan’s forces would say put in Yemen “until the alliance achieves its goals”.

That troop support is likely at the heart of the Gulf’s interest in keeping Sudan from civil war and the country’s transitional military council in some sort of a driving seat.

How would the Gulf react if a new civilian government in Sudan decided to pull all troops from Yemen and decimate the Janjaweed, by holding it accountable for the horrific crimes its men allegedly committed in areas like Darfur?

The other interest in Sudan is a far more mundane one: vegetables.

Over the years desperately food-insecure Gulf countries have been buying up swaths of Sudan’s fertile ground along the river Nile, outsourcing growth of food crops to keep their growing populations alive.

Most recently, in July 2016, the Sudanese parliament approved an agricultural bill allowing Saudi Arabia to cultivate 1 million acres of land in eastern Sudan, less than a day’s sail from the Saudi port of Jeddah.

In fact, according to a piece published by the Pulitzer Centre, investors from Jordan, Turkey, Egypt, the UAE and Saudi are battling to secure another 8.5 million acres of land in deals which are under negotiation.

As environmental journalist Peter Schwartzstein wrote in an important piece for Bloomberg before Bashir’s toppling, the mass land grabs, and overuse of Sudan’s resources like water, has meant one of the most fertile countries in Africa is struggling to feed its own people.

That has fuelled hunger protests that together with myriad other grievances snowballed into the revolution which toppled Bashir.

How much will a democratic civilian government, in the future, be willing to sign over more of Sudan’s resources? Or even honour corrupt deals already in play?

Ticking along in the background are more amorphous fears from countries like Egypt, which will no doubt be concerned by yet another security breakdown along its borders.

The country, run by ex-army chief Abdel-Fattah al-Sisi who also stormed to power after a military overthrow of a president (and presided over the slaughter of over 800 Muslim Brotherhood supporters in a single day in 2013) will no doubt be angling for a military-backed ruler in Sudan to “keep” the peace at any cost.

Egypt is struggling to keep its western borders secure as Libya descends into its third civil conflict in less than a decade. It is battling insurgents and jihadis in North Sinai and trying to stop the complete collapse of the Gaza Strip further east, and so will not want a flood of refugees from the south if Sudan topples into yet another civil war.

There isn’t even much hope from the west.

Despite the statements sounding the alarm and demanding smooth transition to civilian rule, countries like the US will likely take the lead from their Gulf partners.

According to the Daily Beast’s Steven Koutsis, the Americans’ top diplomat in Khartoum arrived in Washington in May to brief government officials and experts about what was going on in Sudan.

Witnesses told Koutsis that the US should “align with the interests of Saudi Arabia, Egypt and the United Arab Emirates”, who have provided military, financial and diplomatic support for Hemitte and the junta, to help it hold on to power.

“It was a confusing statement for many in the room,” the piece read.

So what hope is there for the protesters in the middle of this?

Some have invested some belief in Ethiopia’s PM Abiy Ahmed, who is regarded as moderate and inclusive force in the region, and who may be able to bridge the gaping void between the protesters and the security apparatus, while batting off outside influences.

He was in the troubled country on Friday for a short visit where he called for a “quick” transition. But no deal was struck.

On Sunday, meanwhile, protesters taking part in the first day of a new civil disobedience campaign were teargassed by riot police in the capital.

“We have yet to be defeated but feel that the fight is very difficult,” journalist Abbas said, sounding exhausted.