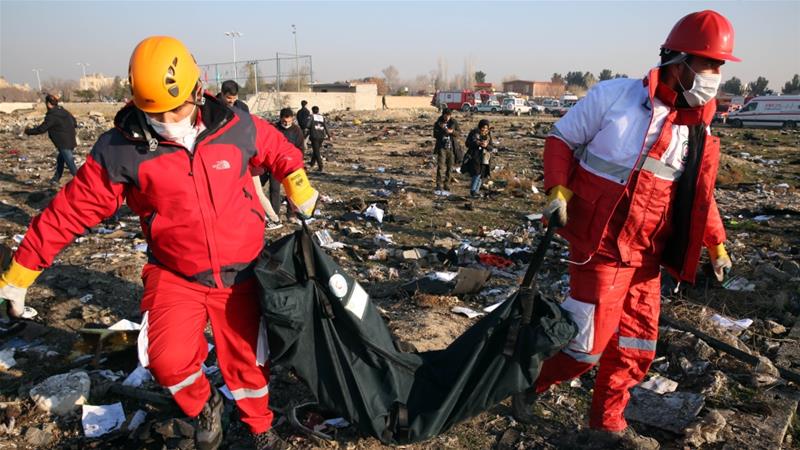 As Western countries claim jet was downed, killing all 176 on board, Volodymyr Zelenskyy demands evidence is shared.

Kyiv, Ukraine – President Volodymyr Zelenskyy said claims that a Ukrainian passenger plane was downed by an errant Iranian, Russian-made cruise missile were “unconfirmed”, as he demanded evidence from Western countries suggesting theories behind the disaster.

The Ukrainian leader on Friday urged the United States, Canada and the United Kingdom to share any intelligence data regarding the Ukraine International Airlines plane crash that killed all 176 passengers and crew on Wednesday, minutes after takeoff from Imam Khomeini International Airport in Tehran.

Writing on his Facebook page, Zelenskyy said: “The version of a missile hitting the plane is not ruled out, but is, for now, unconfirmed.”

He later discussed the crash with US Secretary of State Mike Pompeo on Friday, who offered condolences and assistance in the ongoing investigation. Zelenskyy briefed Pompeo about the progress in the investigation.

Observers say Zelenskyy’s warning was aimed at keeping Ukraine out of a tug-of-war between Washington and Tehran, that has flared following the US’s killing of top Iranian military commander Qassem Soleimani.

“He does not want to play other people’s games,” Kyiv-based analyst Mikhail Pogrebinsky told Al Jazeera.

“Obviously, until there is a confirmed, well-grounded investigation, he does not have to [confirm the allegations of a missile strike]”.

The International Civil Aviation Organization, a UN agency, also called in a statement for people not to jump to conclusions.

“ICAO continues to call for diminished speculation on the possible causes of the accident until the Annex 13 investigation is permitted to be concluded and its official results are confirmed,” it said in a statement.

Other experts maintain that Ukraine is likely to replicate the White House’s interpretation of events due to its dependency on the diplomatic, military and financial backing of the West.

“Kyiv’s capability to present the disaster’s versions that are different from Washington’s messages are next to zero, especially ahead of the [presidential vote] in the US,” Kyiv-based analyst Aleksey Kushch told Al Jazeera.

“We are not just silent – we are silent with Iran and Russia. And in his statement, Zelensky says directly – I don’t believe [US President Donald] Trump, [Canadian Prime Minister Justin] Trudeau and [UK Prime Minister Boris] Johnson,” former legislator Vadim Denisenko tweeted.

The three leaders on Thursday said their intelligence data indicated the plane had been downed by an errant Iranian missile.

Ukraine keeps its distance from the power politics of the Middle East, and its economic ties with Iran are minimal. But Kyiv will be wary of antagonising Russia as it attempts to settle the continuing conflict with Russian-backed separatists in the southeast of the country.

“He just chickened out, because he bows to Putin and does not care about Ukraine’s independence,” Konstantin Rybchenko, a retired police officer and a supporter of former Ukrainian President Petro Poroshenko, told Al Jazeera.

Canadian Prime Minister Justin Trudeau said on Thursday that evidence indicated an Iranian missile shot down the airliner and that the strike “may have been unintentional”.

US officials maintain it was “highly likely” an Iranian anti-aircraft missile downed the plane, while UK Prime Minister Boris Johnson also said there was a “body of information that [suggests] the flight was shot down by an Iranian surface-to-air missile”.

Iranian government spokesman Ali Rabiei said on Friday that their allegations were “a big lie”, according to a statement carried on state-run Press TV.

“We expect to receive all available information necessary for an objective investigation,” said Zelenskyy.

“Considering recent statements by state leaders and media reports, we call on all international partners, namely, the governments of the US, Canada and the United Kingdom – to provide the data and proof pertaining to the disaster.”

The Boeing 737-800 was last seen on radar at an altitude of 2,400 metres, according to the FlightRadar 24 monitoring website, hours after Tehran launched more than a dozen ballistic missiles at military bases hosting US troops in neighbouring Iraq.

Ukraine International Airlines said the plane was only three years old, underwent a maintenance check on Monday, and was flown by an experienced crew