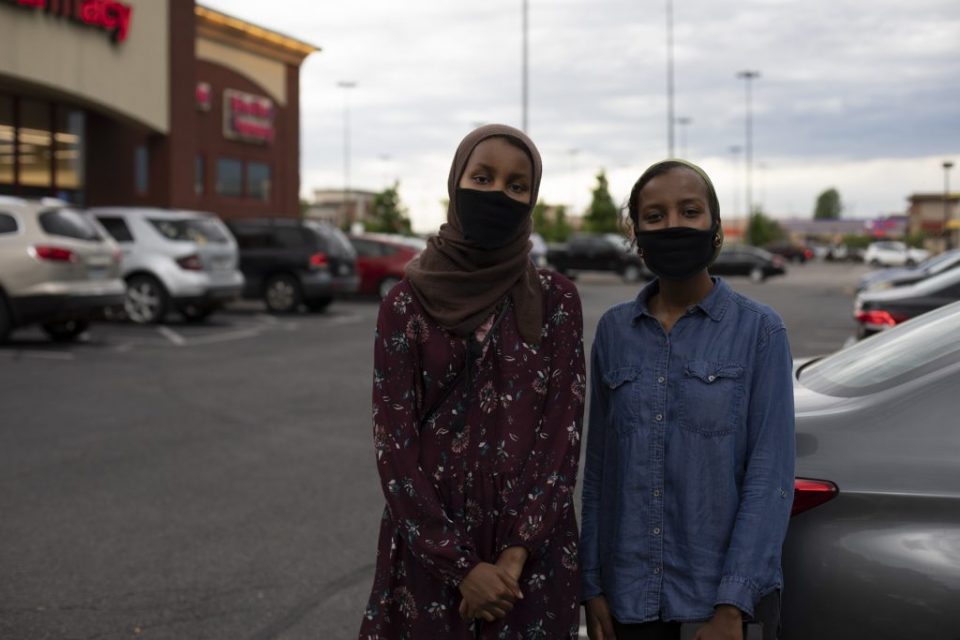 Fadumo Osman and her sister Hanaan carried $1,000 worth of medical supplies and safety gear into a donations drop-off room near 38th Street and Chicago Avenue in Minneapolis, where George Floyd took his last breath.

Abdihakim Abdi stood at the same spot with thousands of other peaceful protesters with his clenched fist high in the air, chanting “no justice, no peace” and “no racist police.”

The day before, on Saturday, Zeyna Jama and her younger nieces and nephew joined hundreds of people in a demonstration for Floyd two miles to the north, outside the Third Precinct station on Nicollet Avenue and 31st Street, as her eyes welled up with tears.

Since Floyd, a 46-year-old black man, died on Memorial Day after a white police officer knelt on his neck for nearly nine minutes, young Somalis have taken center stage in demonstrations across the Twin Cities. Young women in hijabs and long-sleeved shirts are particularly conspicuous on the frontlines of demonstrations, in donation rooms as well as at food banks and in efforts to clean-up floors and board-up of windows in the aftermath of protests.

The young Somalis’ participation in protest isn’t a new phenomenon. They partook in similar protests, including the 2015 police-involved shootings of Jamar Clark in north Minneapolis and that of Philando Castile in 2016 in Falcon Heights. But they have become more visible in the protests over Floyd’s death.

“This one feels different,” said Abdi, standing a few steps from where Floyd begged for his life moments before his death. “Just the way they did the job. It doesn’t matter who you are, you can’t have your knee on somebody’s neck and act like nothing is wrong.”

The killing happened in South Minneapolis and most of the protests are taking place in an area that is literally in many Somalis’ backyard. It’s home to the largest Somali malls and mosques in the state as well as the Somali Museum of Minnesota and hundreds of small businesses.

What’s more significant about the George Floyd protests and those before them — the rallies for Clark, Castile, Michael Brown and Trayvon Martin — is that they’re fortifying the racial identity of Somali youth, who are increasingly incorporating black identity rather than seeing themselves almost exclusively as Somalis, which some of their parents did.

Focus today was in the Cedar Riverside neighborhood for food & general S. Minneapolis for supplies

$1730 in food/medical supplies bought by us. And $900 allocated to a colleague + friend from high school who will continue shopping today. 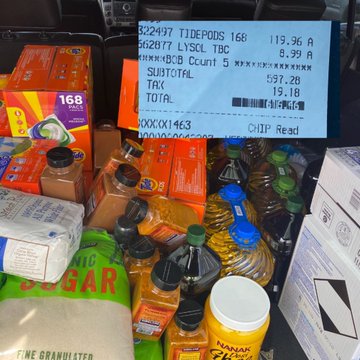 Somalis started arriving in the U.S. in a slow trickle after the Immigration and Nationality Act of 1965, which opened the doors for more people from non-European countries. However, the majority arrived after the Somali civil war in 1991, most of them refugees escaping violence and famine.

Many of them have made south Minneapolis their home. As with other black immigrants, many Somalis come to the U.S. with negative stereotypes about African Americans. As a result, the older generation drew a distinct line between Somali and African Americans for the younger.

In an oral history project conducted by the Minnesota Historical Society in 2004, for instance, Mohamed Jama told interviewers that he was warned against mixing with black Americans as he underwent the refugee resettlement program in Kenya. “A funny thing is, when I was going through my orientation, I was told never to mess with African Americans,” Jama said. “Believe me, coming to America, me as a black man, I was running away from my own black men.”

Pedro Noguera, a professor at the University of California, Los Angeles, had a similar experience growing up in the U.S. His Trinidadian and Jamaican immigrant parents, Noguera wrote in one essay, “too desperately wanted to be distinguished from black Americans.” So much so that they told him he was not black and that the struggle of African Americans for justice wasn’t his.

But in the end, Jama and Noguera noted, life experience taught them that they were indeed black, and that white America doesn’t distinguish one black community from another, whether they come from Mississippi, Somalia or Trinidad.

There’s a generational gap when it comes to understanding race in America, said Hanaan, who on Sunday accompanied her sister in bringing medical supplies and protective equipment to the protest on the 38th Street and Chicago Avenue.

Hanaan added that as someone who came of age in the United States, she has a different perspective on race compared to the older Somalis who weren’t educated in the West or haven’t had as many interactions with white Americans.

“We have a different viewpoint than our moms and aunts and uncles because we learned in our schools American history,” she said. “We learned from firsthand experience how our own friends used to treat us as elementary school students … how they sent us messages about how, because we’re black, we can’t hang out with you.”

Abdi, 22, has lived in the U.S. since he was an infant. Though aware of how many Somalis often like to emphasize their Somaliness, Abdi is quick to say that he’s black. “When it comes to the cops,” he said, “we’re all the same thing.”

Zeyna Jama, another young Somali, has been in the U.S. since she was 5. Like Abdi, Zeyna said she came across black immigrants who would rather highlight their nationalities than their blackness. But in America, she noted, it’s not how you see yourself; it’s how government institutions see you.

‘The youth have put themselves on the frontline’

Since the news of Floyd’s death unfolded, young Somalis have been active in protests in ways they haven’t been in the past. Fadumo, 24, and Hanaan, 22, raised money from family and friends for the medical supplies and protective gear after watching news reports about law enforcement firing rubber bullets and tear gas at protesters, journalists and even on people standing outside their porches in Minneapolis.

As Fadumo and Hanaan dropped off the donations, scores of Somalis in their 20s marched and chanted with thousands of protesters just a few steps from where paramedics picked up unresponsive Floyd. Among them was Abdi, who stood there with his raised fist in the air. “We’re here to protest … what’s going on,” he said. “We can hopefully change how people look at us.”

At the Saturday rally outside the Third Precinct station, Zeyna came with her nieces and nephew to express her frustrations with what she sees as a never-ending cycle of police violence against unarmed black Americans.

“When one of us is attacked, we all get attacked,” she said. “That’s why I’m here. I’m here to support our people and stand up to the injustice that’s happening in this country.”

A few feet away were about half a dozen young Somali men and women who stood shoulder-to-shoulder with African American protest leaders on the frontline, pouring their anger and frustration into the bullhorn. They reminded the audience of the importance of fighting for social justice and the need to pressure Minnesota officials into holding accountable all the four police officers involved in the death of Floyd.

In addition to their high profile at protests, young Somalis are also visible in the efforts to clean up the streets and floors of burned buildings, as well as in boarding up windows and doors of businesses.

And while many young men like Abdi are participating in rallies in large numbers, young women — like Fadumo, Hanaan and Zeyna — in hijabs have been more visible in demonstrations.

“The youth have put themselves on the frontline and are getting hurt,” Fadumo said. “They’re the ones that are protecting Cedar-Riverside and beyond. I’m glad that Somalis aren’t acting like it’s not our problem — because it is.”

Ibrahim Hirsi is a reporter at Sahan Journal, where he covers immigrant communities and the politics and policies that affect them. He was previously a staff writer for MinnPost and MPR News.