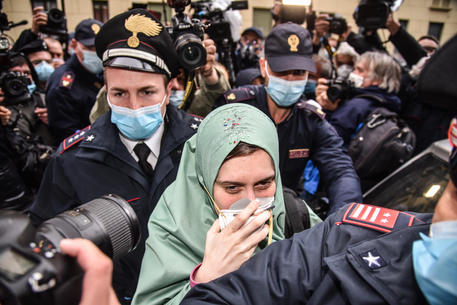 (ANSA) – Milan, May 14 – Silvia Romano, a 24-year-old Milanese aid worker who spent 18 months in the hands of Somali militants after being abducted in Kenya in November 2018 and who was freed Saturday after converting to Islam, said on Facebook Wednesday “the worst is over, now let’s enjoy the moment” after being subjected to hate and threats on social media.
“I ask you not to get angry to defend me,” said Romano, who was freed by a joint operation between Italian, Somali and Turkish intelligence services.
Romano went on: “I couldn’t wait to get off that plane, because for me all that counted was to re-embrace the most important people in my life, to feel their warmth and tell them how much I loved them, despite my (Islamic) garb”.
Romano reiterated, amid widespread criticism from haters of her alleged naivety in going to a hotspot without proper protection, converting to Islam, not speaking ill of her captors in Al-Shabaab, and causing an alleged four-million-euro ransom to be paid to allegedly fund terrorism, “I really ask you all not to get angry in defending me”.
She said “I’m happy because I’m back with my loved ones, thanks to God, who are still standing despite their great pain.
Because I have found you, all of you, ready to embrace me.
“I have always followed my heart and I will never betray it”.
Romano has been defended by leftwing and liberal parties and feminists amid the wave of hate.
On Wednesday a member of the nationalist opposition League party called her a “neo-terrorist” in parliament because she had converted to Islam.
On Tuesday a former League town councillor in Veneto said she should be hanged.
On Thursday League leader Matteo Salvini said he had spoken to his MP who called her a neo-terrorist, Alessandro Pagano, and “the problem is not Silvia Romano but the use the government made of her, showing her off on live TV and making a big advert for the (kidnappers).
“As far as I am concerned, from tomorrow, no more ransoms should be paid”.
He said “there was a law in Italy that prevented payment and it halted the business of kidnappings”, which were rife in Italy in the 1970s. Foreign Minister Luigi Di Maio has denied an Al-Shabaab spokesman’s claim the ransom was paid and the money would be used for jihad