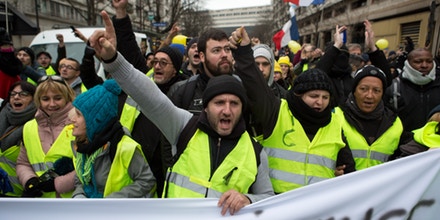 The “yellow vest” (gilets jaunes) protests that began in France last November – and appeared elsewhere in Europe thereafter – were initially ignited by a feeling of tax injustice.

Europe’s political forces are divided between those who regard the European Union as promoting unfair, inefficient neoliberal economic policies, and those who see the bloc as key to preserving the relatively equitable and inclusive “European social model.” Yet the recent European Parliament election featured little debate about this model, and generated few ideas for what policymakers should do to tackle income inequality across the continent.
That is a pity. Comparisons of income growth and inequality in Europe and the United States over the past four decades have yielded important new insights into why incomes are far more evenly distributed in Europe than in America, and about what each side of the Atlantic could learn from the other.
Overall, US incomes have grown faster than those in Europe over the past 40 years. Between 1980 and 2017, average national income per adult grew by 65% in the US, compared to 51% in Europe. The difference largely (though not entirely) reflects the EU’s failure to co-ordinate a continent-wide economic stimulus following the 2007-2008 financial crisis. Compared to Western Europe, which subsequently suffered a lost decade (2007-2017) in which average national income per adult grew by less than 5%, the US grew five times faster.
But these average growth rates conceal the extent to which income inequality has exploded in the US over the past four decades, while remaining far less extreme in Europe. Although the average pre-tax income of the top 50% of American earners has more than doubled since 1980, that of the bottom half has grown by just 3%. In Europe, on the other hand, the pre-tax income of the bottom half of the population grew by 40% over the same period – more than ten times faster than for their US counterparts (although still below overall average European income growth).
Differences between US and European tax and transfer systems do not significantly change the overall picture. After taking these into account, the post-tax incomes of the bottom 50% have grown by a modest 14% in the US since 1980 – still way below overall income growth – and by up to 40% in Europe.
Economists often attribute rising inequality to technological change or growth in international trade. Yet this does not explain the sharply divergent inequality trends over the past 40 years in the US and Europe, because both experienced similar technological shocks and faced increased competition from developing countries over that period. Instead, the contrast between Europe and the US reflects different policy choices.
Policymakers have two broad options for tackling income inequality. Predistribution aims to create the conditions for a more even distribution of income in the future – through investments in healthcare and education, effective antitrust laws and labour-market regulations, and relatively strong labour unions, for example. Redistribution of income, meanwhile, aims to reduce current inequalities through progressive taxation – whereby richer people pay higher rates of tax – and social transfers to the poorest.
Europe’s lower levels of inequality are not a consequence of more redistributive tax policies. True, the top marginal rate of US federal income tax has fallen from an average of 80% in 1950-1980 to 37% today, and President Donald Trump lowered the corporate tax rate from 35% to 21% in his Tax Cuts and Jobs Act of 2017. But Europe’s corporate tax rates have also plunged, from an average of 50% in 1980 to 25% today – thereby benefiting richer citizens who increasingly rely on personal shareholdings for their income. Moreover, taxes on consumption, which impose a proportionately greater burden on the poor, increased significantly in Europe over the same period.
Taxation systems in both the US and Europe, therefore, have generally become less progressive in recent decades. If anything, America’s tax system is now slightly more progressive than Europe’s, but US inequality is nonetheless far greater.
The World Inequality Lab’s How Unequal Is Europe? report suggests that Europe’s more equal income distribution is largely the result of predistributive policies such as national minimum wages, greater worker protections, and free access to public education and healthcare. Yet progressive taxation is still key to reducing both post- and pre-tax income inequality. High marginal tax rates, for example, can help to limit unequal capital accumulation today, and therefore make future income flows more equitable.
More fundamentally, progressive taxes are essential for the political sustainability of countries’ fiscal systems. The “yellow vest” (gilets jaunes) protests that began in France last November – and appeared elsewhere in Europe thereafter – were initially ignited by a feeling of tax injustice.
Finally, progressive taxation also plays a predistributive role in Europe by helping to finance universal public education and healthcare programmes. These in turn promote greater equality of opportunity, and thus more equal distribution of income later on. The danger, therefore, is that the general trend toward less progressive tax systems will make it harder for Europe and the US to contain inequality in the future.
But this is not inevitable. Perhaps US voters may become keener on free public education and healthcare if they see how these have supported rather than hampered economic growth in Europe. And Europe might draw inspiration from how the US government largely ended tax competition between states a century ago by introducing federal corporate and income taxes.
If Europe and the US can learn from each other in this way, radical-sounding approaches to tackling inequality may start to look more pragmatic and feasible on both sides of the Atlantic. And the next four decades might be less unequal than the previous four. – Project Syndicate