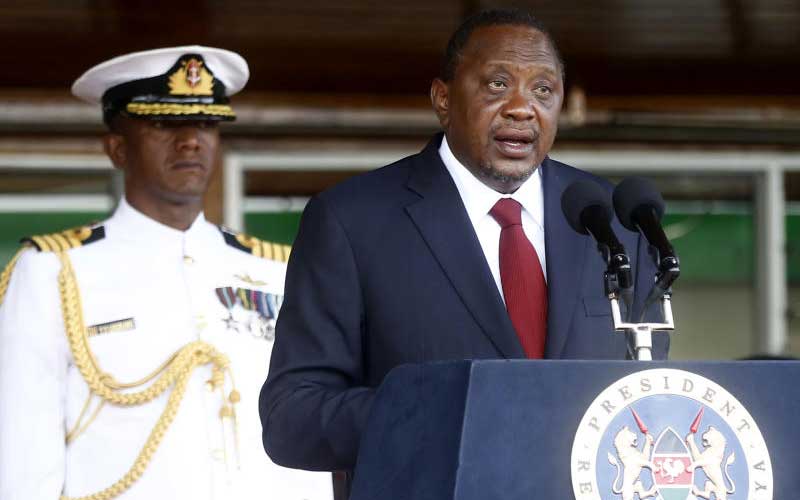 “We gather here today to celebrate Fifty-Six Years, since that glorious day when the flag of our Republic was hoisted for the very first time.

Today, we are honoured to have with us the Prime Minister of Barbados, the Rt. Hon. Mia Mottley, please join me in welcoming her to Nairobi. Rt Hon. Prime Minister, your acceptance to join us to celebrate our Jamhuri is a clear indication of your commitment to the promotion of Pan-Africanism and the Bridges that unite the Caribbean and the continent of Africa in friendship, solidarity and fraternity. Fellow Kenyans, On the 12th Day of December, 1963; the People of Kenya witnessed the birth of an Independent State; a culmination of decades of the Struggle for Independence. That, indeed, was an astounding feat, achieved through a shared quest to liberate our homeland; we fought hard for it; we wrestled it out of the unwilling hands of a mighty world power; we stood against what seemed insurmountable odds but nevertheless prevailed.

And so today, as we celebrate our sovereignty, we honour those who gave their lives so that we could be free; those who fought in the forests, valleys, mountain-tops and plains; those who stood their ground in the LEGCO and refused to be compromised with the promises of a half-baked and empty Independence; those who guarded the young Kenya against adversaries; and those in modern times, who stand at borders, in our streets, in public offices, at home and abroad; defending and advancing our sovereignty and national interests. As a Nation, we shall remain grateful to our independence-era heroes for delivering a free Kenya and restoring our ability to govern ourselves and determine our own destiny. Today, we are called upon to honour their commitment and sacrifice by being true to the ideals that they lived and died for, most especially the ideal of “One Kenya, United, Strong and Prosperous; with Freedom and Justice for All”. Fellow Kenyans,

At independence, Kenya was a Nation of hope and potential. Today, we are the gatekeepers of our liberty, our Nation is a Beacon of Freedom, a Lighthouse that continues to shine the way for other African nations. The ideals of Freedom, Democracy and Prosperity that we have built over these Fifty-Six Years, are helping in shaping our region and beyond. My Fellow Kenyans,

At the dawn of the Republic, we stood at about 8.9 million Kenyans; today we are a Nation of 47 million strong. We, the People, remain Kenya’s greatest strength and resource. Our Unity amid Diversity, our National and Social Values, our status as a Regional Hub, Cultural Melting Pot, our Heritage and Splendour, our unmatched reputation for being a Country that provides shelter and safe-harbour for those fleeing turmoil in their Home Countries; these ideals of our Founding Fathers, are alive and well in today’s Kenya.

The Kenya of today is the River that flows from the Source of Greatness. This Greatness is embodied in the spirit of those who went before us. That Kenya would become a country devoid of poverty, ignorance and disease. Inspired by the ideals of the independence generation and empowered by the resolve to always be better, just and progressive, we are making every endeavour to return the River to its course. We are returning the River to its course by turning every hurdle into a stepping stone, every challenge into an opportunity and every obstacle into a bridge for a better future for all.

In the Fifty-Six years since we attained Independence, Kenya continues to grow by leaps and bounds, growing from strength to strength, buoyed by a devolved structure of governance that has accelerated development across the Republic. From Shimoni to Moyale, Embu to Bungoma, Siaya to Kiambu, Eldoret to Voi, Mandera to Kisii, Wajir to Narok; we have found shared destiny in our diversity. Brick-by-brick, generation-by-generation and administration by-administration, we are building on years of steady progress, to achieve national renewal and rebuild the bonds of brotherhood among our peoples, by weaving a new and stronger fabric of patriotism and nationhood. With this national endeavour, the wealth, security, democracy and vitality of our Republic, will set us head-and-shoulders above our peers. We are returning the river to its course by fostering national unity and inclusiveness, through building bridges of unity towards a better Kenya for all. Make no mistake, in 2019, Kenya has chosen to consign to the dustbin of history partisan divides and politics that is centred on individual interest at the expense of common good.

In 2019, we have anchored our dreams and aspirations on a unity that resonates with that, which existed in the independence-era generation. Kenyans today must now unite to drive the remnants of poverty, disease, illiteracy, inequality, division and conflict from our Nation. This monumental task towards sustainable development, can only be achieved if we remain united, focused and driven by the desire to always put our country-first. Kenya Kwanza. My Fellow Kenyans, At independence, Kenyans inherited a country stripped bare by a colonizing-power whose only intention was to extract. We inherited a country beset by poverty, illiteracy, poor health and chronic under-investment in infrastructure and social amenities. We were divided along ethnic and religious differences. We were a colonial relic, whose identifying marks were inequality, injustice, poverty, exploitation and oppression.